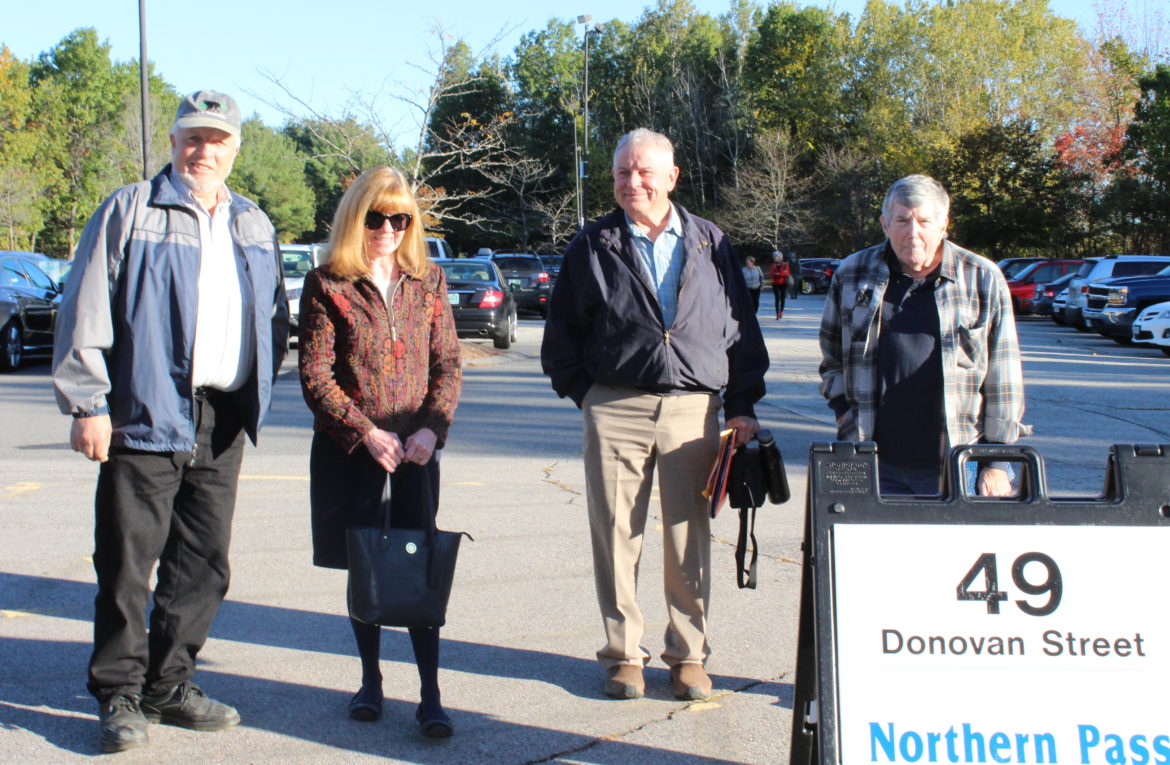 The 10 stars of Tim Shellmer’s anti-Northern Pass video were sworn in together Friday to testify before state regulators how the proposed 192-mile high-voltage transmission line from Pittsburg to Deerfield will impact them, their families – and their cows.

Dairy farmer Rod Mcallaster, who milks 80 cows twice a day on his Stewartstown dairy farm, took the trip to Concord for day 49 of the adjudicative hearings before the Site Evaluation Committee. It was the first time in his 65 years that he headed anywhere south of Littleton.

“I’ve been too busy,” Mcallaster said in natural Yankee dialect when asked on arrival why he hadn’t ventured anywhere south of the notches before.

Of Concord, he remarked wryly on the “skyscrapers” and the size of the Dunkin Donuts. There’s one in Lancaster, he said, but it’s just not as big.

As a result, Mcallaster found some sudden celebrity and easily got the most laughs with his quick, dry wit of any witness before the committee that will decide whether to grant Northern Pass permission to go ahead with a $1.6 billion plan to bring Hydro-Quebec electricity to the New England grid.

And these can usually be counted on as staid, predictable, tense-at-times, trial-like proceedings.

The large rented hearing room at 49 Donovan St. was filled with about 120 people Friday, far more than the usual crowd. There have been 48 prior hearings since April and more to come through the end of the year as the intervenors – mostly opponents – put on their case why the project shouldn’t be built.

Developers Northern Pass/Eversource Energy recently wrapped up their case, which had been ongoing since April. They say it will create jobs, help the economy and bring tax revenues to its 31 host communities.

Attorney Michael Iacopino, who represents the evaluation committee, asked Mcallaster if the date he filed his prefiled testimony was in November of 2016.

“It could be,” Mcallaster said.

Iacopino: “Do you swear that it is truthful?”

If asked, would Mcallaster’s testimony be the same today? Iacopino asked.

Mcallaster: “I would hope so.”

Mcallaster and nine other North Country residents who appeared in the 21-minute video “Negative Impacts of the Northern Pass Transmission Line” were required to testify in order for it to be played as testimony to the committee. The video, which was commissioned by intervenor Brad Thompson, was filmed by Tim Shellmer of Jackson, who was also present Friday for the applause it received after the showing.

Chris Aslin, Counsel for the Public, asked Mcallaster how the project will impact him and his farm.

The milk needs to be trucked out every other day, grain must be trucked in every two weeks and a cattle truck comes and goes weekly, he said.

If the road is closed as he was told it could be, there is a back way out with a four wheeler, but not passable for a big tractor trailer truck carrying milk, Mcallaster said.

Mcallaster said he was under the impression the road could be closed for weeks on end during construction that would ruin business and keep his two grandchildren, who live down the road, from getting to school.

A couple of years ago, Mcallaster said he was told at a public hearing that there would always be one lane open, but learned more recently from project testimony that road closures would be needed.

Mcallaster was later asked if he heard a proposal by Northern Pass to buy his milk and dump it if it couldn’t be transported.

“It’s kind of counter-productive, I think. We’re producing milk to feed people to get a living, a simple living. It’s work to produce.

“..If we don’t get the feed in to feed them, we won’t be dumping a lot of milk,” Mcallaster said.

During a break, Northern Pass spokesperson Martin Murray insisted there will be no road closures, that Mcallaster’s road will always be open. Murray pointed to highlights in the testimony in which one intervenor who was opposed to the project agreed that it would bring jobs during the construction phase and some tax benefits to the towns.

The Northern Pass hearing room in Concord was packed Friday.

But it was mainly road closures that Murray wanted to focus on and said repeatedly there will be none. He was also pleased that while on the witness stand, Mcallaster agreed to meet with Northern Pass officials after he testified that they had not reached out to him over the years.

Murray said Mcallaster had been under the false impression that roads would be closed, but now understands they will not be closed.

But a member of the construction panel seemed to contradict Murray’s statement. At the Oct. 2 hearing  testimony about Mcallaster’s need to move milk out and feed in at his dairy farm, Northern Pass expert Samuel Johnson indicated there would be road closures.

Johnson said: “So I think the transportation of the milk away from his facility would either be rerouted if there are road closures or could be slowed down, if you will, as it goes through the construction zone.

“But permanently impacted, if it is shut down, if you will, that would only be for a very small period of time,” Johnson said.

The questioner then asked: “Regardless of what happens, he’ll probably at least have some temporary impacts where, for example, you may have to buy some milk from him or it will impact his operations. Would you agree?”

Counsel for the Public Aslin asked Mcallaster: “Did the applicant reach out to discuss road closures?” 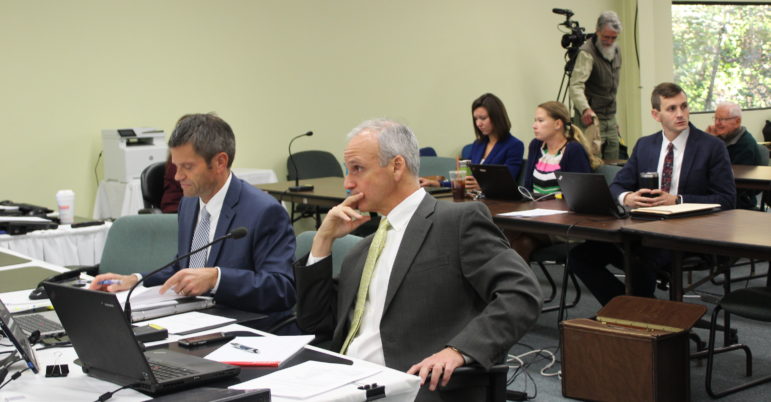 Mcallaster said he never received the letters that were sent in 2014 and another just recently. Later questioning revealed they had been sent to the wrong address.

In the video, Bette Guerin testified as the owner of Fiddleheads, a shop on Main Street in Colebrook, about the impacts to tourism and local businesses. 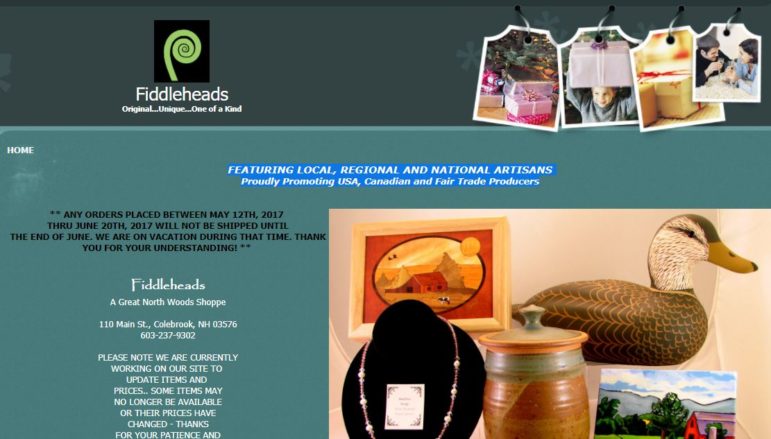 “I don’t look at how it’s going to affect me as an individual. I think more as a community,” Guerin said. “When people come to our area, the first and foremost thing they come for is for visual grandeur and beauty of the locale.”

Dr. Kaufman testified how hard it would be to get out to see his patients or if he or his family needed medical care or if firefighters couldn’t get through because of road closures.

Northern Pass attorneys had opposed showing the video at the hearing, but subcommittee chairman Martin Honigberg issued an order allowing it if the 10 featured spokespeople testified.

Thompson testified that it was to show the committee the natural beauty of the North Country in areas where there presently are no transmission lines/no rights of way and the impact on Pittsburg, Clarksville and Stewartstown.

Jason Reimers, the attorney for the Society for the Protection of New Hampshire Forests, asked John Harrigan of Colebrook what he meant in his testimony when he said Northern Pass uses New Hampshire as a “doormat.”

“Basically, I view this project as a pipeline, an extension cord” to get Hydro-Quebec power they desperately need to sell to market, Harrigan said.

Deerfield intervenor Jeanne Menard asked each of the 10 video participants if they agreed with Northern Pass experts that the project would not be detrimental to their property’s value. They all disagreed.

Cindy-Lou Amey chastised Northern Pass because of the sheer volume of printed material people would be expected to read to make an informed decision on the project.

A retired teacher, Amey said her students’ eyes would have glazed over at the book-case full of material.

She said she hoped the video provided information in a more visual, easy to understand way. When Chairman Honigberg interrupted Amey saying the comment was not related to the question she was asked, she responded:

“Excuse me, sir, but it was related…”

Amey told Honigberg that it had to do with the reasoning behind the video. Honigberg interrupted her and moved on asking if other members of the group had anything to add to their testimony.

During the afternoon session, Kris Pastoriza, a member of the Easton Conservation Commission who did a great deal of research on the construction plans, questioned attorney Steve Nix about errors in Northern Pass’ surveys.

Nix testified that the surveys by Northern Pass experts were inadequate and failed to meet basic surveying standards.

Pastoriza said Northern Pass had the information two years ago, but chose to drag their feet and cut the SEC out of the process and rely instead on the state Department of Transportation’s decision.

Dr. Kaufman testified that the impact of the whole seven-year process has been hurtful to many in the North Country.

“Some people nod their head and don’t seem to care.”