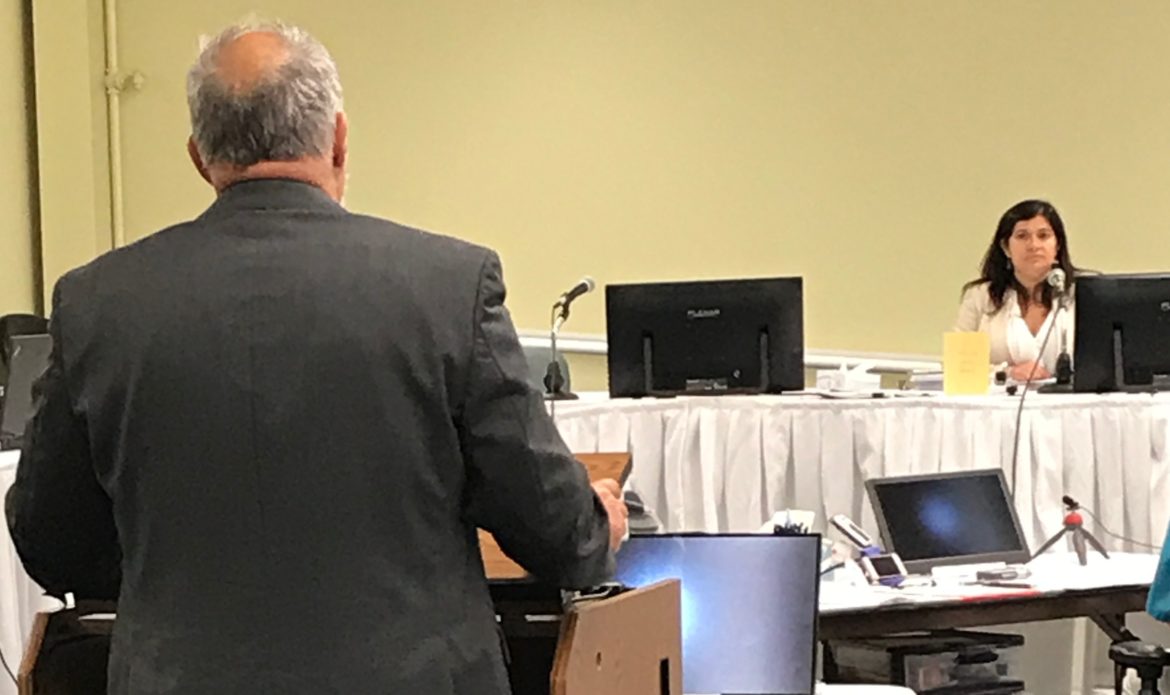 CONCORD — Despite challenges to her economic projections about the benefits of Northern Pass Transmission, an economist hired by developer Eversource stood by her report on the project.

On day 14 of testimony in the adjudicative hearings on the $1.6 billion, 192-mile project to bring Hydro-Quebec electricity to the New England market before the Site Evaluation Committee, several attorneys suggested projections by Julia Frayer of London Economics International LLC were inaccurate.

They claimed her projections failed to include the growth of solar power and the need for additional high-voltage transmission lines, or future reductions in greenhouse gas emissions.

At Tuesday’s hearing, Frayer was asked how much an average residential customer using 300 kilowatts of electricity a month would save due to Northern Pass, and she said about $18 a year, or about $1.50 a month.

Later, she said New Hampshire electric customers would save an average $61 million a year over an extended period of time.

Much of the projected cost benefit from the project bringing 1,090 megawatts of hydro power to the region results from future savings to consumers when Hydro-Quebec enters the forward capacity and wholesale markets.

Under the forward capacity market intended to produce reliable electric sources into the future, power generators bid saying they will provide a certain percentage of their generating capacity to the market in three years. This year New England generators received more than $2 billion for future sales although the price has been declining for the next few years due to lower natural gas prices.

When Northern Pass – through Hydro-Quebec begins bidding in 2020 or so – Frayer said that will bring the cost per kilowatt hour down and produce savings for all New England consumers.

But Site Evaluation subcommittee member Kathryn Bailey noted the most recent auction for forward capacity produced a surplus of over 1,600 MGW.

Won’t the potential savings be lower than currently projected, she asked, and Frayer said yes in the short term, but the overall projections would hold over time.

She said oversupply takes the system more reliable and noted electric “demand goes a long way out before it hits zero.”

According the Frayer’s  projections, Northern Pass’s additional 1,090 megawatts of power will not cause existing plants to close, but Bailey suggested the reimbursement rate may be low enough that some generators will leave the forward capacity market.

Wouldn’t some plants find they could not compete? Bailey asked.

Frayer stood by her prediction, but noted some plants may decide to leave the forward capacity auction.

“(There) would be no retirement, but in terms of the auction, it would be the same effect,” Frayer said. “They may come back once prices recover and it’s rational to do so.”

Other savings for consumers were projected due to reduction in greenhouse gas emissions, which Frayer said are declining due to the Regional Greenhouse Gas Initiative.

The lower price and emissions caused Frayer to reduce her economic benefit projections down 25 percent in a revised report issued in February and revised again in March.

Conservation Law Foundation Attorney Melissa Birchard noted project officials have been reducing estimates for carbon reduction benefits, and Frayer’s work did not take into consideration the potential for additional transmission projects and lower electricity costs in the forward capacity market.

Frayer said her revisions did take into account changes in the market and in emissions.

“The projections were accurate at the time they were made” she said, but market conditions evolved and they were revised.”

Birchard asked to go into closed session for about 20 minutes to discuss sealed portions of Frayer’s testimony and people who hadn’t signed a confidentiality agreement were asked to leave. InDepthNH.org has filed a right-to-know request to obtain Frayer’s unredacted testimony.

Earlier in open session, Attorney Alan Robert Baker, representing landowners and developers along the route, questioned Frayer about a disclaimer in her report.

Frayer said the disclaimer is standard in any report as a signal that someone should do their own due diligence.

“You’re asking the state of New Hampshire to rely in some way on your projections to determine whether or not there is any public benefit for this project,” Baker said. ‘Is there anything in this report you would take out?”

Frayer stood by the report saying it provides an analysis the site committee could rely on.

Hearings continue Wednesday with a panel of environmental experts that Eversource hired to work on the project.