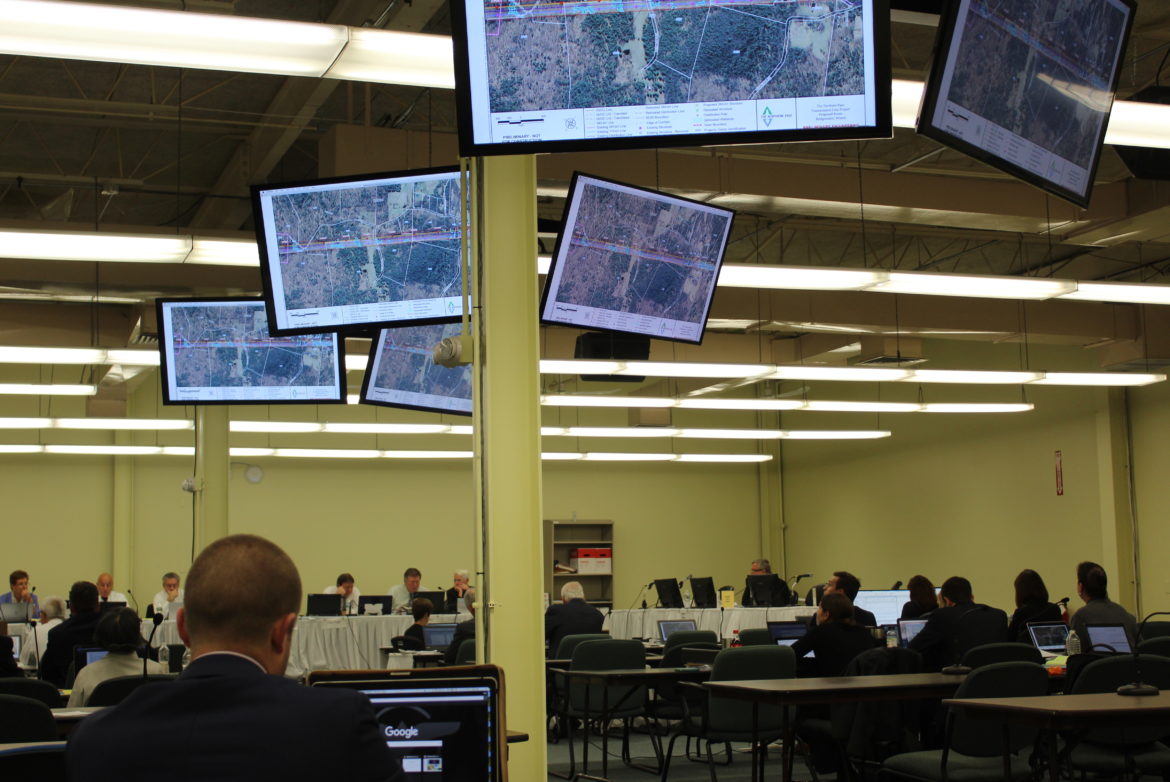 Northern Pass adjudicative hearings are being held at 49 Donovan St., in Concord through the end of the year.

Northern Pass spokesman Martin Murray dismissed recent comments from the U.S. EPA touting the benefits of burying an additional 40 miles of the project’s transmission line as old news, but Jack Savage of the Society for the Protection of New Hampshire Forests said he is missing the point.

They were both referring to a Sept. 26 letter from the U.S. EPA to the U.S. Army Corps of Engineers saying that burying 40 miles at the most northern portion of the proposed line would be less damaging to wetlands and wildlife than as currently proposed and “appears practicable.”

And it would only raise the cost of the proposed 192-mile high-voltage transmission line from Pittsburg to Deerfield from $1.37 billion to $1.5 billion, according to the EPA letter, which was submitted as a supplement to comments it made on the project over a year ago to the Army Corps of Engineers.

“A letter this week from the U.S. EPA regarding potential impacts along the northernmost area of the proposed Northern Pass route contains no new information and Eversource does not expect this to delay the issuance this year of a required wetlands permit by the U.S. Army Corps of Engineers,” Murray said underlining portions of his email for emphasis.

Murray said it is also important to note that Northern Pass does not require a permit from the U.S. EPA.  “The agency’s letter this week was directed to the ACOE, which is expected to issue a required wetlands permit to Northern Pass before the end of the year,” Murray said.

But Savage said, “Northern Pass is missing the point. The EPA is throwing Northern Pass a lifeline by suggesting how the proposal could avoid being shot down entirely due to the mounting evidence of adverse impacts.”

Savage went on: “The EPA’s letter will likely be considered at the (Site Evaluation Committee), a body that can say ‘yes,’ ‘no,’ or yes with conditions…conditions such as burial instead of new overhead right of way in the North Country.”

As proposed, the line is buried along 60 miles of the route with 132 miles of overhead lines.

“The more that Eversource rejects sensible suggestions, the more likely it is that Northern Pass will never happen,” Savage said.

There have been more than three dozen adjudicative hearings in Concord so far on the application and another 31 hearings are scheduled through the end of the year.

The seven-member SEC will decide on the application by a majority vote by Feb. 28, 2018. The deadline has been extended twice already.

Will Abbott, the Forest Society’s vice president for policy and stewardship, said: “It has long been the Forest Society’s position that a completely buried line within an appropriate transportation corridor would have substantially fewer adverse impacts on landscapes, private property values and natural resources like wetlands.

Murray pointed out that “Northern Pass responded to the EPA in an October, 2016  letter, noting that ‘our proposed route is the least environmentally damaging practicable alternative…’ Additionally, the U.S. Department of Energy last month issued the project a Final Environmental Impact Statement, concluding that the proposed Northern Pass route is the ‘preferred alternative,’ that the project provides substantial benefits, and will result in only minimal impacts.”

He also said the state Department of Environmental Services issued a state wetlands permit to Northern Pass in March.

“The mitigation package also includes eight conservation sites which are valued for having numerous wetlands, floodplains, streams, vernal pools, or are connected to other conservation lands,” Murray said.

In the letter, Jacqueline LeClair, chief of EPA’s wetlands protection unit Region 1, said, “The additional 40 miles of burial provided in the northern segment of the route adjacent to existing roadways would reduce direct and secondary impacts to many streams.

LeClair didn’t respond to requests for more information on Friday.