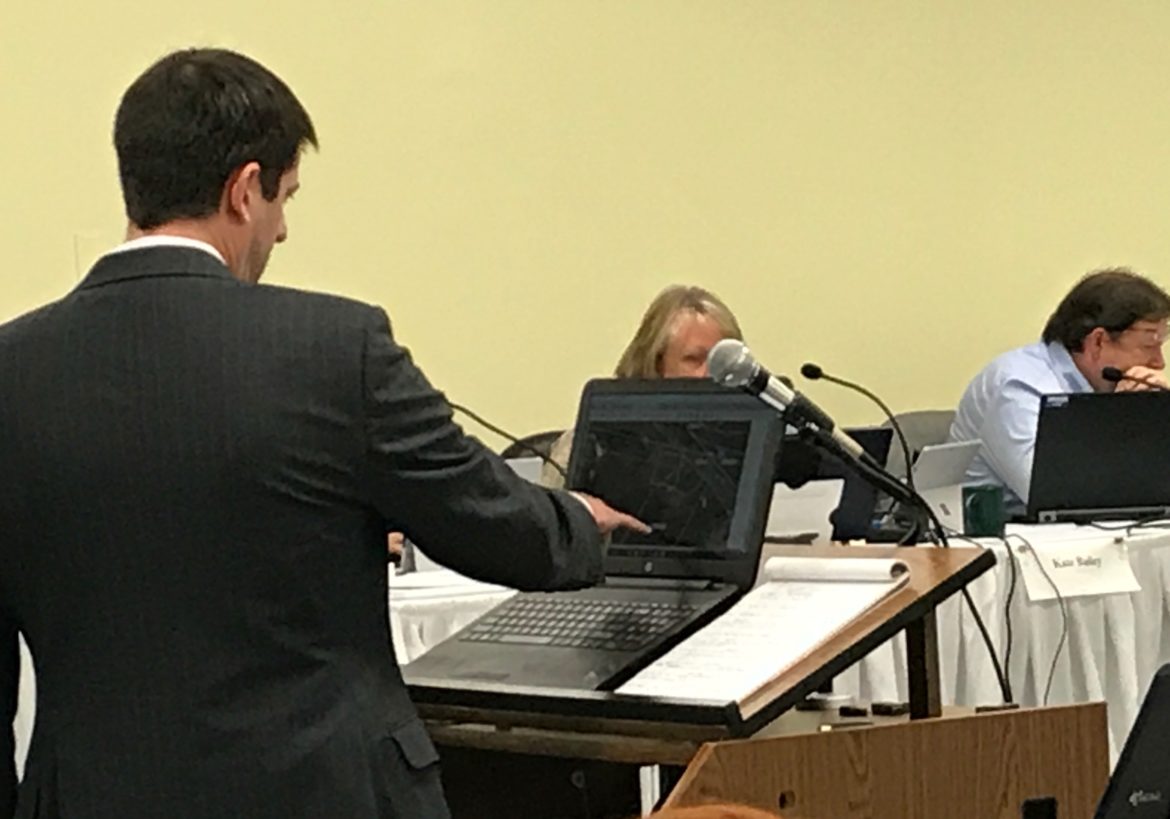 CONCORD  — The accuracy of real estate data used to conclude that the Northern Pass Transmission project would have little or no impact on property values was questioned by several intervenors Tuesday.

Dr. James Chalmers of Chalmers & Associates of Billings, Montana, was hired by project developer Eversource to review the impact the new transmission line stretching from Pittsburgh to Deerfield would have on property values near and adjacent to the proposed route.

Chalmers concluded that once built, the high-voltage transmission line would slightly diminish the value of properties split by or abutting the project with little or no impact on properties more than 100 feet from the right-of-way.

During the adjudicative hearing before the Site Evaluation Committee Tuesday, Chalmers acknowledged a few individual property owners could face significant economic loss along the 192-mile route, all but 60 miles on overhead lines.

He said his study concerns the local and regional real estate market, not individual properties. “In fact we have identified a set of properties that will be (impacted) and if they go on the market, it could have a significant impact on property value,” Chalmers said.

Inaccuracies in the data produced by three professional appraisers supplied on 58 property sales along three existing transmission lines that Chalmers used to help arrive at his conclusions were noted by several intervenors.

The data’s accuracy and the credibility of the appraiser who did the bulk of the work was questioned the day before as well.

Tuesday Chalmers said his biggest concern in doing major projects like his 2015 report “High-Voltage Transmission Line and New Hampshire Real Estate Markets: A Research Report,” is the accuracy of the data.

He said the inaccuracies noted by the intervenors helps to clarify the information, but does not change his conclusions.

“I’ve been doing this for a long time. You do the best job you can and get the data as clean as you can get it,” Chalmers said. “In some cases, you have great data and other cases in North Country the density of sales is so sparse it is very difficult to get good comps and you have to take that into account.”

Attorney Stephen Judge representing McKenna’s Purchase, a Concord condominium association in Concord, noted Chalmers did not initially review the impact on his clients although the property is adjacent to and is encumbered by the utility right-of-way where the new transmission line will be.

Chalmers said he decided to concentrate on detached single-family homes because that is the most sensitive sector and that “is where you start. This is an expensive and difficult procedure.”

He said he did review McKenna’s Purchase after testimony was submitted about the potential impact of the lines on the condominium association and included his research in his supplemental written testimony.

Chalmers said he compared the sale prices of units next to the right-of-way with those further away and concluded distance did not impact sale prices.

But Judge suggested he should have compared McKenna’s Purchase with other condominium associations in Concord not near the Northern Pass route.

Chalmers said he wanted to test whether proximity to the power lines affects sale price. Studying relative condo prices in Concord is a whole different question than what he investigated, Chalmers said.

“The only evidence you relied on is within McKenna’s Purchase,” Judge said, “so at the bottom you are doing a risk analysis” and not whether the new line would impact property values for the entire association.

Another intervenor questioned Chalmers’ conclusion the new transmission lines would have little or no impact on properties more than 100 feet from the utility right-of-way.

Jeanne Menard of Deerfield noted her town has a view tax with a valuation guide book for assessing the value of views.

The tax assessor assigns a value to the view that is added as an amenity to the property, she said.

“View premiums are very common and appropriate and should be reflected in (property) values,” Chalmers said, “they influence market value.”
Menard said Chalmers’ report has a 100-foot limit for properties to be included in his model, yet many properties with view assessments are well beyond the limit. Once Northern Pass is built those property owners could seek a reduction in property value well beyond the 100-foot range, she suggested.

“They could,” Chalmers said.

Chalmers concluded the transmission lines could cause property values to decrease between 1- and 6-percent for properties encumbered by the line or adjacent to it, but the impact would dwindle with distance.

Chalmers will continue to testify Wednesday.

Hearings on the $1.6 billion, 1,090 megawatt transmission project to bring Hydro-Quebec electricity to New England continue Thursday before a break until the end of the month when they will resume.