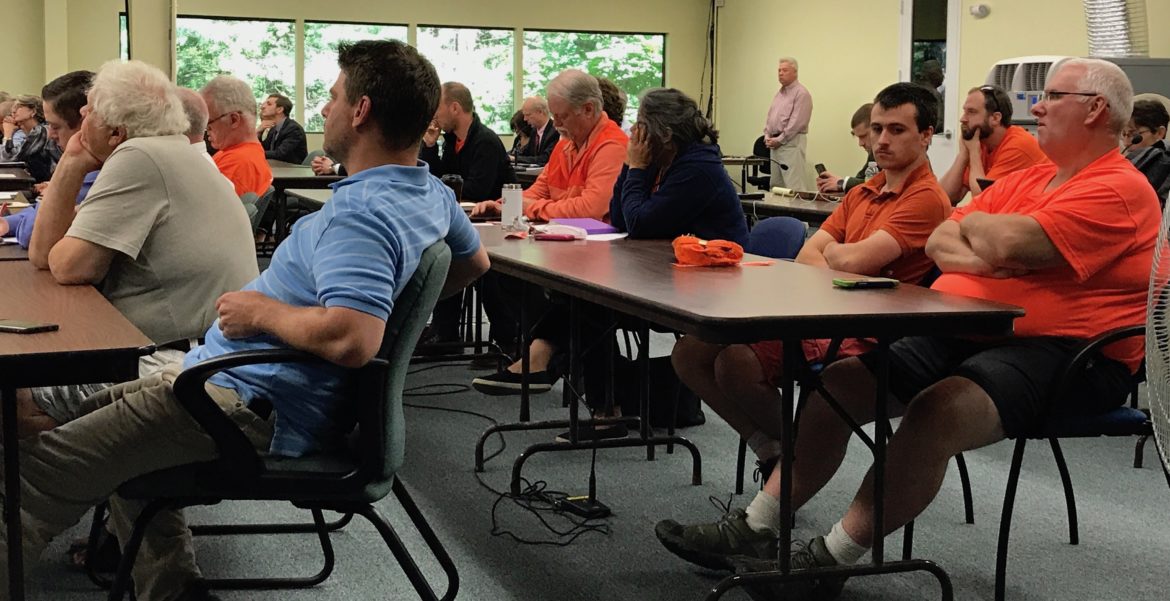 A line of orange shirts indicating their opposition to the Northern Pass Transmission project sit in a row at a public hearing before the Site Evaluation Committee Thursday in Concord.

CONCORD — One person described Northern Pass Transmission as a several-hundred-mile long extension cord from Canada to feed the electric appetite of southern New England without any sweetener for New Hampshire at a public hearing Thursday before the Site Evaluation Committee.

The controversial project also had its supporters who said it is the only mechanism in the next few years that will reduce the region’s high electric costs and bring companies back to the Granite State. Those assertions are challenged by opponents.

About 40 people spoke at the first of three public hearings scheduled on Northern Pass/Eversource’s proposed $1.6 billion, 192-mile, 1,090 megawatt transmission line to bring Hydro-Quebec power to the New England electric grid for people who aren’t intervenors, but have an interest in the matter. A fourth public hearing is expected to be added.

The hearings are part of the Site Evaluation Committee’s ongoing adjudicative hearings that will stretch into September. The committee must decide whether to approve or deny Northern Pass/Eversource Energy’s application by Sept. 30.

The opportunity to tell the committee what they thought drew people from as far away as Connecticut and as close as Concord with opponents outnumbering supporters by about two-to-one.

The opposition mostly centered on the environmental impact of the project as several people described the transmission line as a permanent scar on the face of New Hampshire that will harm the tourism industry as well as endangered and rare species of wildlife and plants and drive down property values.

Theodore Bosen, a retired attorney who is now a Berlin inn owner, said the view of the White Mountains is what draws people to his inn.

Northern Pass towers will be 40 miles away but they will be a blemish on that view, he told the committee.

“The view is what people come to New Hampshire for,” Bosen said. “There will be no significant future for the tourism industry in the North Country if you string something like this across the White Mountains.”

But supporters of the project said cheaper and more abundant electricity will spur the economy and help everyone, particularly large electric users such as large manufacturers and grocery stores.

Michael Skelton, president and CEO of the Greater Manchester Chamber of Commerce, said businesses need new sources of electricity and lower electric rates. Skelton was a media spokesperson for PSNH, now known as Eversource, from 2011 to 2014, according to LinkedIn. 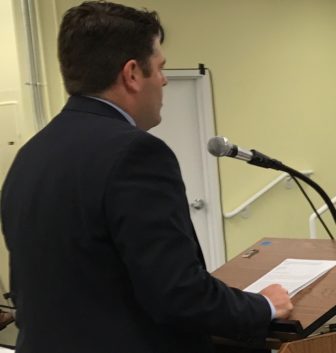 Michael Skelton, president and CEO of the Greater Manchester Chamber of Commerce, speaks in favor of the Northern Pass Transmission project Thursday before the Site Evaluation Committee.

“The key question to consider is, ‘Do the benefits outweigh the potential impacts?’ and the benefits unquestionably, yes, outweigh the impacts,” Skelton said. “This is the best large-scale option we have before us right now with real tangible benefits to our state.”

Several people said they do not object to additional hydro power, but do object to the 20th century approach to building the line, all but about 60 miles on overhead towers. The line will be buried through the White Mountain National Forest and then from Bethlehem to Bridgewater along state roads, including down Main Street in Plymouth.

Engineer and environmentalist Geoff Daly of Nashua said he opposes the project, saying as proposed it would be an “enormous environmental disaster,” destroying wildlife, vegetation and farmland.

He said the technology is available to make the system safe from ice storms and other severe weather, which would reduce maintenance and repair costs while accommodating telecommunication cables in the same tunnel.

New tunnel boring technology used in other countries would be cheaper and create good jobs in New Hampshire, he said, while saving the state’s forests, wildlife and farms.

Thursday’s hearing reflected the division as two state Representatives spoke on opposite sides of the issue.

Rep. Herb Richardson, R-Lancaster, said the silent majority in the North Country favors Northern Pass because it will bring jobs, new tax revenues for towns along its route and an economic development fund.

Richardson, who serves on the House Science, Technology and Energy Committee, said New England grid managers are nervous about the energy supply with six generating plants closing along with the Vermont Yankee nuclear plant. He said Northern Pass will provide clean, affordable energy for years.

But Rep. Brad Bailey, R-Monroe, said the North Country is an economically distressed area that depends on the tourism industry. The project will put a scar on the state and drive away jobs, he maintained, and will not lower electric rates in a meaningful way.

There are other options such as Granite State Power Link, which would use existing right-of-ways to bring the same hydro power from Quebec power to New England.

Likewise, two residents of Deerfield were at odds over the project. The transmission line would end in Deerfield, where it could connect the Canadian hydro power to the New England grid.

Suzanne Steele of Deerfield said her community voted against the project several years ago, but soon after that vote an information meeting was held and the town parking lot was filled with out-of-state cars.

She said one-third of the entire state could be unreasonably impacted by the transmission line.

“It boils down to trust,” Steele said, and while they are good people proposing the project, they are more interested in profits than the best interest of the state.

“Please follow the criteria and just say ‘No,’” Steele urged the committee.

Deerfield resident Meredith Briggs said 10 generations of her family have lived in town.

“I would rather cut out my tongue and dig out by heart with a spoon than damage the town I love,” she said. “I strongly believe in this project. I believe it creates jobs, tax relief and electricity. If we work together I’m sure we can reach a solution we can all live with. It is my backyard too.”

Several Yale students traveled to Concord to oppose the project saying they hope to convince the university’s Committee on Investment Responsibility to end the lease with Northern Pass to cross the Bayroot parcel the school’s endowment owns.

Elias Estabrook, who grew up in Concord and Dover, cited Yale’s history of investing in destructive projects.

“Yale’s investment in Northern Pass — by leasing land to Eversource — would follow a similar pattern of putting profits over local and global ecosystems and indigenous rights,” he told the committee.

On Wednesday, Eversource extended its lease to use the land for 93 years. The lease would have ended July 1 if Eversource had not made its payment.

Estabrook said after the hearing he still has hope he and others can convince the investment committee “to do the right thing.”

Travis Luksza of Dunbarton said he has had to go out of state to find work in his field, but now works for Eversource. He said he hopes the project will provide more job opportunities for others to have good paying jobs and better benefits.

The next public comment hearing is Thursday, June 22 at 9 a.m.

The committee continues adjudicative hearings on the project Friday with an environmental panel answering questions from intervenors in the project.