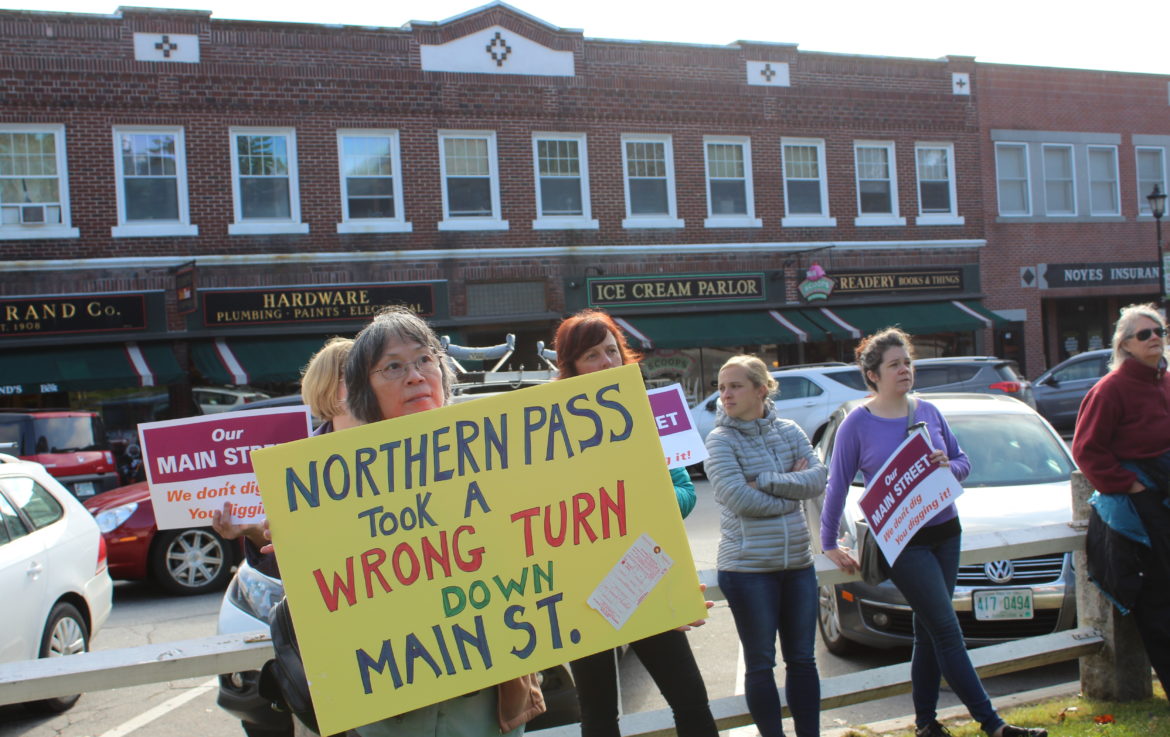 UPDATED: Northern Pass spokesman Martin Murray responded to InDepthNH.org at 10:20 p.m. Tuesday saying many people met the Site Evaluation Committee members at the court house and followed them the entire tour. “From my perspective, most of the folks along Main Street were quite aware of the committee’s arrival and walking tour,” Murray said.

“The site tour today was very successful. It allowed the committee members to view and understand the effort the project has taken to limit potential impact by placing the project underground, through Plymouth and into Bridgewater – and, to utilize existing rights of way for the section of the project from Bridgewater to Deerfield,” Murray said.

A couple hundred people gathered on the Plymouth Town Common Tuesday to protest Northern Pass as members of the Site Evaluation Committee climbed off a bus nearby to walk the stretch of Main Street where part of the proposed 192-mile transmission line would be buried.

People of all ages gathered to say no to Northern Pass and enjoy the warm, sunny autumn morning. Some brought their kids; others walked their dogs. Many wore bright orange shirts or hats and carried orange anti-Northern Pass signs. Most took no notice as evaluation committee members walked along Main Street.

Walt Palmer of Franconia came to fight the $1.6 billion project that would bring Hydro-Quebec electricity from Pittsburg to Deerfield, then on to southern New England. Sixty miles of the project would be buried, including through downtown Plymouth, if the SEC approves the plan.

“Northern Pass will go right through the middle of our farm,” Palmer said.

“It’s an abomination.  It’s a destructive project. It’s unneeded and not beneficial to New Hampshire.” 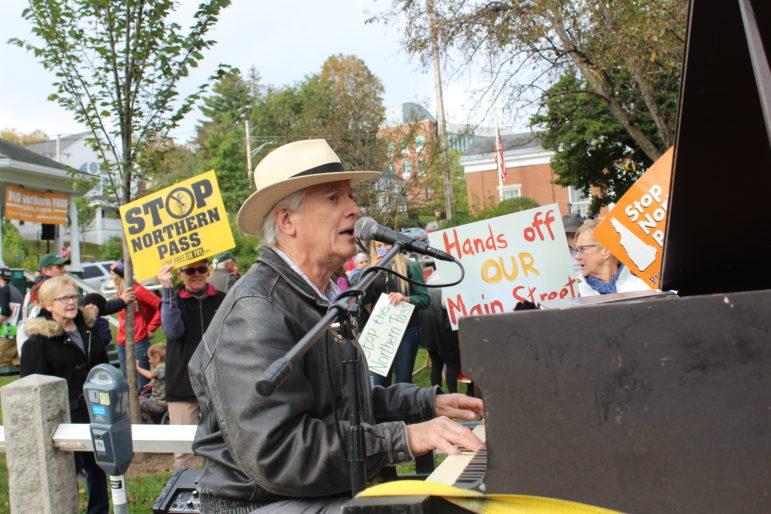 Tuesday was set aside by the Site Evaluation Committee for a bus trip for the seven-member committee, Northern Pass officials and some intervenors to travel from Plymouth to Deerfield with stops along the way to show areas that would be impacted.

It was part of the adjudicative hearings that have been ongoing since April and will continue through December. The committee will decide by a majority vote whether to approve Northern Pass/Eversource Energy’s application to import 1,090 megawatts of electricity from Hydro-Quebec.

Members of the Site Evaluation Committee did not interact with the group and quietly walked in pairs along Main Street.

Well-known Plymouth businessman Alex Ray was disappointed that he didn’t get to see the committee members as they passed. He wanted to at least hand them a piece of paper on which he had jotted down his thoughts about the project.

Ray did speak to the crowd from the gazebo, asking them to communicate one-on-one with their friends and elected officials and he stressed the importance of voting.

“Those guys didn’t even want to hear us today,” Ray said of the committee. “I was looking forward to saying, ‘Can you take this little piece of paper home with you’ because you can’t talk to them here today, but I wanted to one-on-one them,” Ray said.

That may be hard, he said. “But we can do it. We can and if we do it, we can get it to hell off Main Street if it does happen. That’s my focus today,” Ray said. 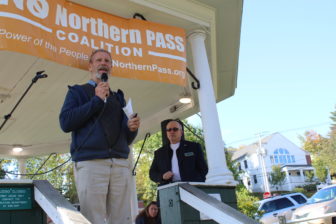 Ray owns the Flying Monkey Movie House and Performance Center on Main Street in Plymouth and founded the family of Common Man restaurants around the state. He is also a partner in other ventures, including the Welcome Centers off I-93.

“There are other choices for sure if Northern Pass ever comes to fruition,” Ray said. “Money talks and that’s what’s going to happen. If it happens, let’s keep it off Main Street. That’s my number one push.”

There are better alternatives in Plymouth, he said.

“We’ve got Green Street. We’ve got I-93, a railroad track. Bury it in the towers. That’s really the path they want to take,” Ray said.

Rep. Suzanne Smith, D-Hebron, told the crowd that in early 2016, a number of state representatives and senators sought to intervene in the Northern Pass proceedings, but was denied.

“We have not stopped,” Smith said. On July 30, we submitted 104 names of legislators and former legislators who are opposed to Northern Pass because of what it will do to our economy, our tourism, and the aesthetics of the state. Yes, I would like to visit New Hampshire and see the towers – not,” Smith said.

“I want to thank all the legislators who signed on in opposition to Northern Pass and all of the people here today who have been fighting all these years of the crazy plan of this arrogant company,” Smith said.

District 1 Executive Councilor Joseph Kenney spoke to the crowd, focusing on his disappointment that the U.S. Forest Service was in favor.

Eighty percent of Northern Pass goes through towns that he represents on the Executive Council.

“That’s our forest,” Kenney told the crowd. That allows it to go through Sugar Hill, Franconia and Bethlehem and North Woodstock. “In my judgment those areas are sanctuaries,” Kenney said. 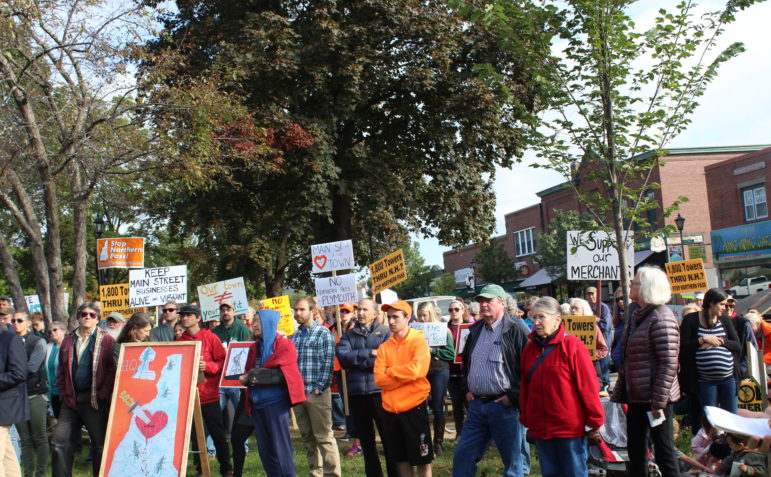 A quote from the Forest Service supervisor was blatantly political, Kenney said. The supervisor said the intensity and duration of the project and its effects are more than outweighed by the benefits associated with bringing additional hydro-power to New England, Kenney said.

“The reality is the U.S. Forest Service should not enter the politics of the project. It should just give its data and recommendations and move on,” Kenney said.

Jan and Bruce Ahern of Plymouth also came to the Common to just say no to Northern Pass.

“If they tear up this street, the shoppers will never come back and that’s my concern,” said Jan Ahern.

“I’m here to express my opposition to the project as it is currently proposed,” Darrow said.

Rep. Steve Rand, D-Plymouth,owns the hardware store across the street from the Common. Lawnmowers were on sale at 20 percent off. He, too, spoke to the crowd opposed to Northern Pass.

State Sen. Bob Giuda, R-Warren, said Northern Pass has been pressing forward despite intense resistance from the public and businesses.

“I think we are seeing, according to my email, the emergence of a new movement in New Hampshire in which the right of self-determination of towns and cities is going to be moving forward,” Giuda said. “We are not a home rule state.”