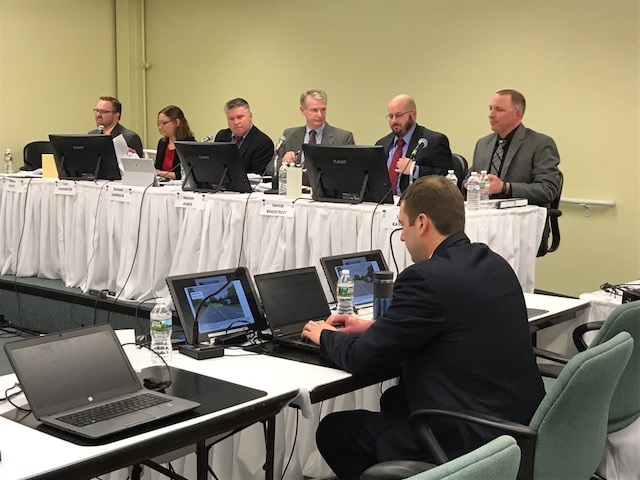 The buried transmission line will go under Main Street in downtown Plymouth, through Woodstock, Franconia and Easton, according to the latest plans to move 1,090 megawatts of Hydro-Quebec power along a 192-mile route from the Canadian border to Deerfield.

The $1.6 billion project will take two to three years to build if it is approved by state regulators who are currently in the midst of more than 30 days of adjudicative hearings on Northern Pass. The committee is expected to issue a decision in September.

Construction season coincides with the biggest influx of tourists to New Hampshire and in Plymouth it also overlaps the beginning and end of the academic year for Plymouth State University.

Counsel for the Public Thomas Pappas noted the area has many driveway cuts, shops, restaurants, businesses, government buildings and the university, and is heavily traveled by vehicles, bicycles and pedestrians.

“This is probably the heaviest traveled section of the underground portion and biggest tourist area,” Pappas noted, and Samuel Johnson, the lead project manager agreed.

He did say burying the line below the utilities would take additional time.

Pappas suggested the work in downtown Plymouth would take between 12 and 18 weeks to complete, but Johnson said three months was probably more accurate.

Johnson said they had discussions with Plymouth officials about the impact construction would have on the community, and offered alternatives.

“They chose not to pursue this after about a two-month period of developing plans,” Johnson told the committee.

While about 20 parking spaces will be lost during construction, he said, there are large municipal parking lots within 100 feet of Main Street.

Johnson said letters have been sent to businesses but as yet there has been no personal contact with business owners along the route.

Once the construction schedule is developed and mitigation such as night work and alternative routes are determined, they would begin reaching out, he said.

“We believe once we have that in hand,” Johnson said, “we’ll have much more productive conversations with each of the business owners.”

Under questioning from Counsel for the Public Pappas, project officials said they would need town approval for a detour over local roads to bypass the roundabout on Main Street and Holderness Road, which connects the downtown to Interstate 93.

Lynn Farrington, a traffic engineer advising Northern Pass on the project, said an alternative detour using I-93 has been developed, but is much longer and less convenient.

Pappas spent Tuesday morning questioning Northern Pass officials about the buried section of the transmission project between Bethlehem and Bridgewater, often noting the work would require closing one lane of the two-lane highway.

Pappas focused on areas where specialty drill equipment will tunnel through the ground under highways and water bodies, noting large sections of roads would have to be restricted to one lane for about one-quarter mile in some sections.

He noted one section of drilling underground would be in front of the Woodstock Fire Station where there would be lane restrictions on both sides of the facility although the road in front of the station would remain two lanes.

Farrington said when possible, they plan to utilize sidewalks and street parking spaces to have enough space for two lanes of traffic.

But Pappas noted that would eliminate parking on both sides of the road.

About 60 miles of the 192-mile route will be underground, mostly through the White Mountain National Forrest and areas entering and exiting the federally-owned land.

Project construction is expected to be the topic for the remaining two days of hearings this week.