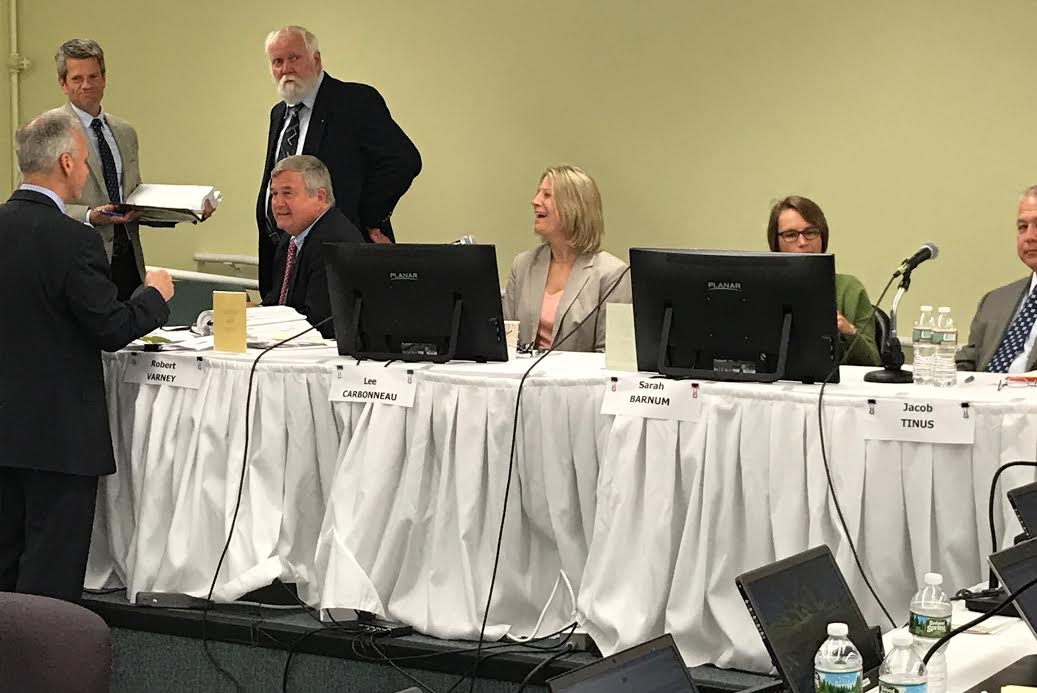 CONCORD — State regulators may be considering an economic trigger for the Northern Pass Transmission project that could ultimately determine whether the project goes forward.

Committee Vice Chair Kathryn Bailey suggested the committee might consider conditioning its approval on whether the project will be able to participate in the forward capacity market developers believe will potentially lower electric rates for New England ratepayers.

“As a committee member, I want to be really sure the savings you’re projecting are really robust,” Bailey said to economist Julia Frayer of London Economics International LLC. “One way to do that is to clear the capacity market.”

In order to participate in the forward capacity market, the project has to provide information about the project’s costs to the Independent System Operator for New England. The operator then determines what price will allow the developer to recover costs and a reasonable return on investment.

If the per megawatt cost is higher than the price generators receive in the forward capacity market for their future energy obligations, then the project would not be able to participate in the bidding or “clear the capacity market.”

The forward capacity market is intended to provide market reliability. Power generators bid at a yearly auction to provide a certain percentage of their generating capacity to the market in three years.

This year New England generators received more than $2 billion for future sales and the cost will increase next year to $2.7 billion before declining due to lower natural gas prices.

Bailey asked Frayer how a conditional certificate would affect developers of the project and she said she couldn’t speak for Eversource, Northern Pass or Hydro-Quebec, but from her point of view just selling energy “is not as convincing” as also participating in the forward capacity market.

Bailey asked Frayer if she is confident Northern Pass would qualify to participate in the forward capacity market.

“I am confident this will clear the capacity market,” Frayer said, but warned such a condition may create unintended negative consequences in the future.

The SEC also heard from a panel of environmental experts who advised Eversource on the impacts associated with the proposed project to bring 1,090 megawatts of Hydro-Quebec electricity to the New England grid.

An attorney representing the Counsel for the Public noted the project will impact three endangered plants and four endangered insects, yet the mitigation plans address only the Karner blue butterfly and wild lupine essential to its survival.

Attorney Doreen Connor questioned if the project proposes to do enough to protect the rare and endangered plants and insects noting plans often are not following the best management practices to conserve the species such as avoiding any impact by burying the distribution line in areas in Concord and Pembroke.

The Karner blue butterfly and several other endangered butterfly species depend on wild lupine that is abundant in the current utility right-of-way that Northern Pass will use.

The project has purchased a seven-acre parcel that will be used to mitigate impacts to the butterflies and plants by construction on the new transmission line.

The land includes seven acres in the pine barrens in Concord and 87 acres in Pembroke. The capital area land is part of 1,627 acres of conservation land the project has purchased to mitigate environmental impacts, mostly in the North Country.

But Connor was concerned that little is known about the number of endangered butterflies or other possible areas of endangered plants except for the Karner blue and the wild lupine.

Lee Carbonneau, senior principal scientist with Normandeau Associates, said there is a pine barrens management plan proposed that was developed in consultation with US Fish and Wildlife, NH Fish and Game and the National Heritage Bureau.

“It is a habitat approach, it will be restored and a mitigation site will be created with suitable habitat,” Carbonneau said. “That is a way to address those species whose specific reductions were not quantified.”

Connor questioned if the plan was complete, and Carbonneau said it was submitted with the project’s most recent mitigation plan.

Connor also raised concerns about the project’s effect on bats, deer and moose and what will be done to mitigate the impacts.

Carbonneau said environmental monitors will track construction sites and will work with the contractors if they are not following protocols.

The public will have the first of at least three opportunities to voice their opinions on the project that stretches from the Canadian border to Deerfield on Thursday.

More than 115 people have signed up to speak on the controversial project that opponents say will hurt the state’s tourism industry and the state’s environment, lower property values and disrupt businesses.

Speakers will have three minutes to make their case at the public hearing that begins at 9 a.m. at 49 Donovan Street in Concord.

Analyst: Customer Using 300 kw Would Save $1.50 a Month With Northern Pass