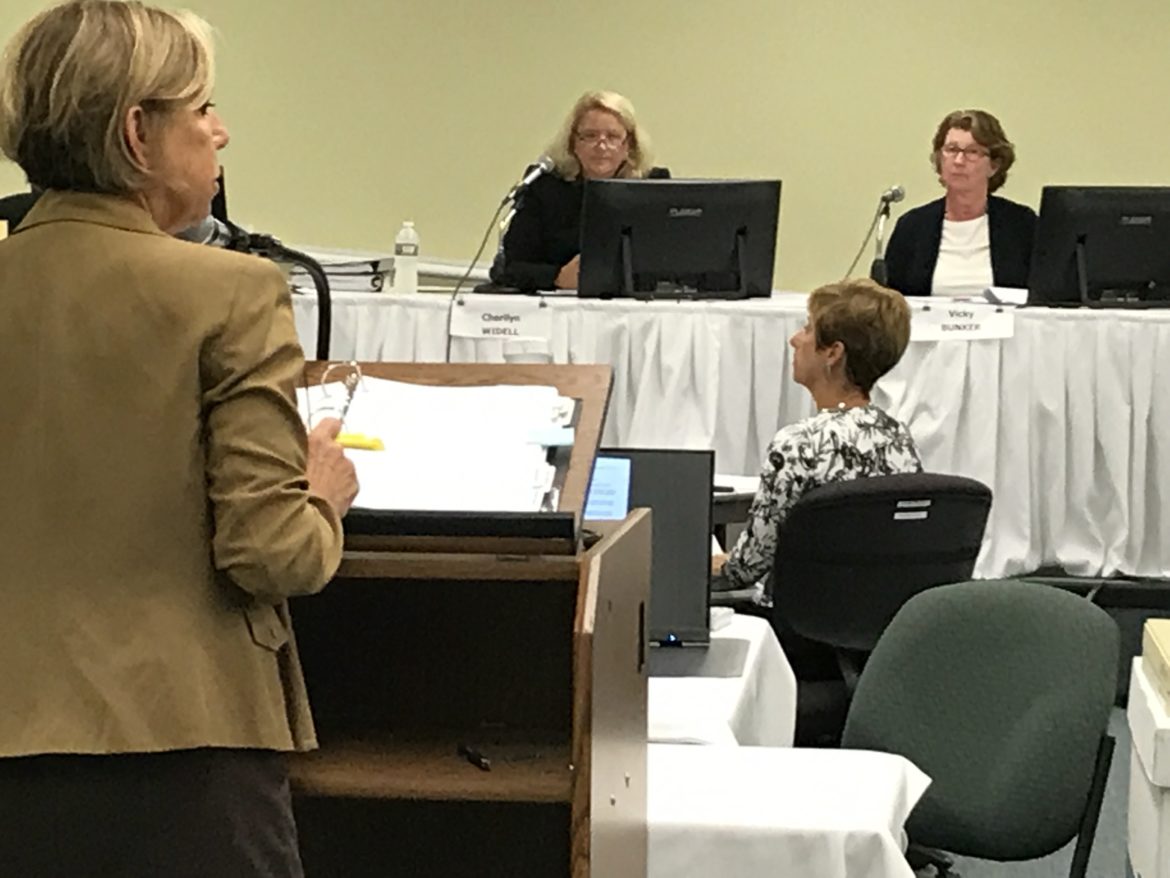 CONCORD — The local experience, credentials and conclusions of the historic preservation expert Eversource hired to assess the impact of the Northern Pass Transmission project were questioned Tuesday when adjudicative hearings resumed after a three-week break.

Both Counsel for the Public and the attorney for the Society for the Protection of New Hampshire Forests questioned the conclusions and assessments made by Cherilyn Widell of Widell Preservation Services LLC of Chestertown, Md., on the impact of the 192-mile, high-voltage transmission line from Pittsburg to Deerfield.

The attorneys also noted the Division of Historical Resources recently submitted an 11-page letter by senior historian Richard Boisvert noting much more work needs to be done as the original assessment missed a number of historic properties, historic and cultural districts, as well as architecturally significant properties and historic town centers.

The letter notes much more work will need to be done as the applicants and state and federal agencies work through the federal historic preservation process to mitigate and avoid impact to historic properties.

Society for the Protection of NH Forests’ attorney Elizabeth Boepple noted Widell’s work to assess Northern Pass’s impact on historic and cultural resources was her first in New England, and all of her other experience was in California, in the south and in mid-Atlantic region.

And Boepple asked Widell if she had ever done an assessment on a utility project that stretched for 192 miles and she said she had not.

“So your sole experience in New England as an historic preservation consultant is for this one client on this project and the Seacoast Reliability Project,” Boepple asked.

“This is not crazy science, it’s been done over and over and over again and began in the 1960s,” Widell said, and “we do it very carefully and thoroughly.”

Boepple noted in pre-filed testimony that Widell said the project’s impact would be minimized because nearly 100 miles of the line would be in existing utility right-of-ways.

Widell said it would, but the transmission lines have been in place for at least 60 years and in some cases 90 years. And the lines were often constructed on low-lying areas which helps to minimize the visual impact.

“That does not say there is none,” Widell said. “But that is exactly what we reviewed over and over again. That is exactly the type of things we looked at.”

Boeppe noted that near Widell’s home in Maryland she volunteers her expertise to testify on a proposal to say adding a new cell phone tower near a rural, residential historic district would have an unreasonable impact on that community although only 15 percent of the tower would be visible.

Widell said each property needs to be looked at, the characteristics and the setting. “And that is what we have done in a very careful manner over and over and over again.”

But Counsel for the Public Peter Roth took issue with the methods Widell and others hired to assess the project’s impact used and how thoroughly the evaluations followed state and federal guidelines.

Widell has repeatedly said she believes the project will not globally have an unreasonable adverse impact on historic structures along the project’s route.

“I am very much convinced there will not be an unreasonable adverse impact on those historic resources,” she said, but noted she has identified six properties where mitigation will be needed to minimize the visual impact. The Division of Historical Resources has identified several additional sites it believes will also need to be addressed through the federal preservation process.

Roth focused on Whitefield’s downtown commercial square saying Widell did not analyze or evaluate the visual impact to the district, which is eligible for national historic designation.

Instead, he maintained she shortcut the process to determine the square’s significance and integrity while doing a “quick and dirty” analysis of the visual impact.

Widell said the square’s views are not a defining characteristic and said it has already been determined to be eligible for the national registry.

Roth listed the criteria to determine a project’s adverse impact on a historic area, but stated nowhere does Widell’s work show that has been done.

“Rather than determine the project would not diminish the integrity of King’s Square,” Roth said, “you say the buildings face one another so view is not a distinguishing characteristic.”

She said the first step is to identify the defining characteristic of a historic property and that is what you use to determine if there is any adverse impact. In the central business, there are not significant views, she said.

The experts’ assessment on the project’s impact on Weeks State Park and the Rocks Estate were noted by a number of questioners.

Widell said there would be some adverse impact, but it would not be unreasonable.  Roth and Boepple disagreed, noting both properties had significant views, with Roth noting Widell found no unreasonable impact on historic structures anywhere in the state.

Widell said the park is considered to be part of a cultural landscape that will be considered under the federal preservation process.

But Concord attorney Danielle Pacik said the Department of Energy has not received the cultural landscape forms and not reached any findings.

The reports will not be made available to the parties until the department has determined its finding, she noted.

Hearings continue Wednesday but will end at 3:30 p.m. A public comment period will be held from 5 to 8 p.m. at 49 Donovan St., Concord.

No End In Sight For Hearings on Northern Pass’ Controversial Plan