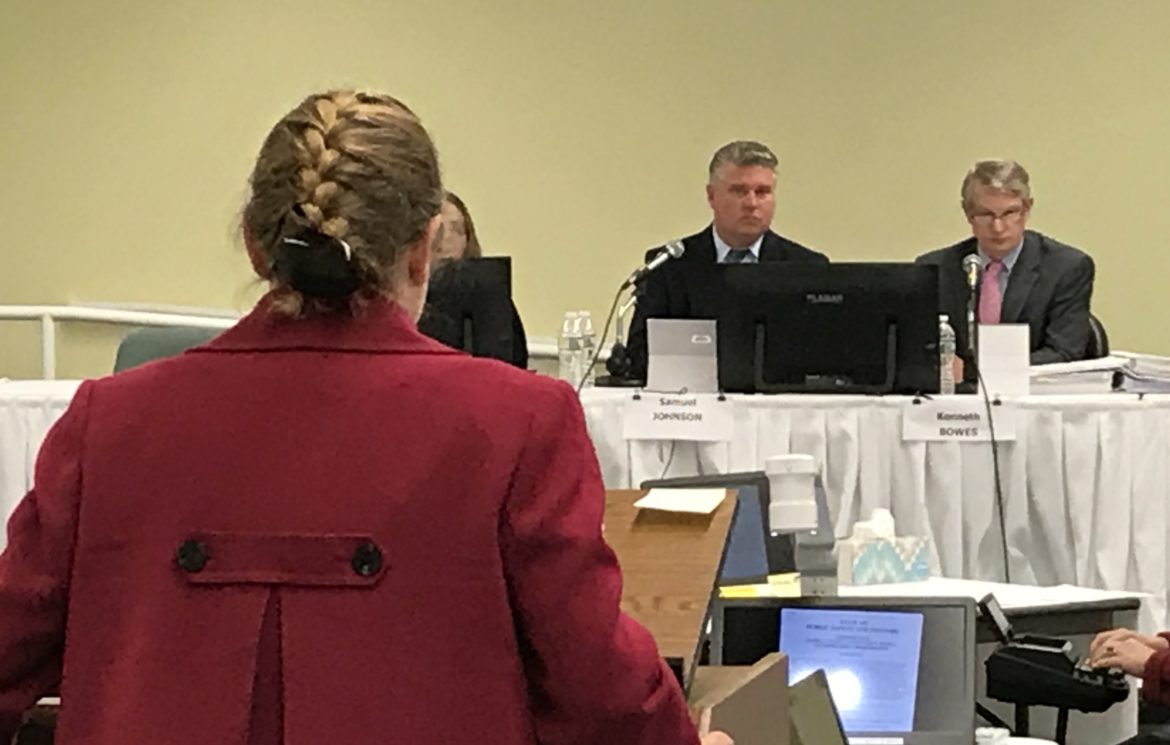 CONCORD — Landowners along the buried section of the Northern Pass Transmission project may not know the final line placement until state transportation officials decide where it may be placed under state roads.

At Monday’s adjudicative hearing on the $1.6 billion project stretching from Pittsburg to Deerfield, Grafton County Attorney Lara Saffo pressed project officials to reach out to abutting landowners in areas where the layout changed. At this point, 60 of the 192-mile line are supposed to be buried underground, with most of that from Bethlehem to Bridgewater.

Saffo, who represents the Grafton County Commissioners in the proceedings, asked Eversource Vice President of Engineering Kenneth Bowes to send landowners new survey reports for the state right-of-way road boundaries so they will know if their properties would be impacted by design changes.

Bowes said he would consider her request after the Department of Transportation decides on requests to bury portions of the 1,090 megawatt line under sections of state roadways.

Project developer Eversource needs the exception requests because the state Utility Accommodation Manual forbids burying utility lines under state roads and recommends they be as close to the right-of-way edge as possible.

“Private landowners left a public hearing at Loon Mountain understanding the line would go under the road and not into adjoining land and the application says that,” Saffo said, “and now you do not want to include landowners until a final approval of a different design?’’

Bowes replied he would want to know the DOT’s decision and any attached conditions before sending out the information. He also said he does not know the scope and scale of such a mailing, and wants to know that before committing.

“The plans shown at a specific public hearing were current at the time,” Bowes said, “with the best information available.”

Saffo asked if a landowner wants to know what will happen on his land, should he consider the entire state right-of-way to be fair game for the project.

Bowes urged landowners to reach out to Eversource and officials will show landowners the initial design, the exception request if there is one and the “highly probable design” based on what the DOT has decided to date.

“We want to be able to show them something more concrete than ‘that makes sense, that is where it will go,’” said Samuel Johnson, lead project manager.

But Saffo said if a landowner objects and developers move the line or location, that will impact an adjoining property owner.

“Most property owners are concerned about what happens from their front door to the pavement,” Saffo said. “Their home is their primary asset.”

Bowes said that is true almost everywhere. “We’re not proposing any taking of property or buildings,” he said, noting the work would be done within the state right-of-way or on property the company already owns.

As part of its application, Eversource asks the Site Evaluation Committee to authorize the DOT to review and decide any exception requests for burying the line under town-owned roads along the 8-mile section of new line in Pittsburg and Stewartstown.

Committee member William Oldenburg, who represents the DOT on the panel, said his agency may not want to take on that responsibility for local roads.

Bowes said resources may be an issue for towns and having the DOT make the decision would provide consistency along the entire route. And he said some provisions would be needed so a town could not delay the project by refusing to act on a request.

He said the agency has put the issue aside until the SEC decides whether to delegate its jurisdiction to the DOT.

Bowes said the developer would be willing to indemnify the state and towns for any additional costs associated with the request.

Committee counsel Michael Iacopino said there are other options that could be considered such as hiring an outside contractor at the company’s expense to oversee the work on town roads or for the SEC to decide and enforce it.

Attorney Robert Baker said he assumes the developers have not submitted the maps to local municipalities for their review, comment or determination, and Bowes said that is correct.

If the SEC determines local boards will need to approve work done to bury the line under town roads, Baker asked, how much longer would that process take than submitting the requests to the DOT?

Bowes said it would add another month to the process. He expects the process to move fairy quickly once the additional surveying work is done.

The agency wants the developer to do additional work to better define the state right-of-way boundaries in order to determine a number of exception requests, saying in many cases the information submitted by Eversource involved approximations.

The company submitted about 190 exception requests, with 118 currently under discussion including 20 that have been approved with conditions. Agency work on the requests has been suspended until the survey report is done in about five to seven weeks.

The project to bring Hydro-Quebec electricity to New England was first proposed seven years ago. The SEC recently delayed making its final decision for five months pushing its deadline until the end of February, 2018.

The committee added 31 more adjudicative hearings to be held at 49 Donovan St., in Concord from October through the end of the year.

If it receives all its permits, Johnson said Monday that construction could begin in April.

On Tuesday, the committee will visit project sites from Plymouth to Deerfield. Adjudicative hearings resume Friday.