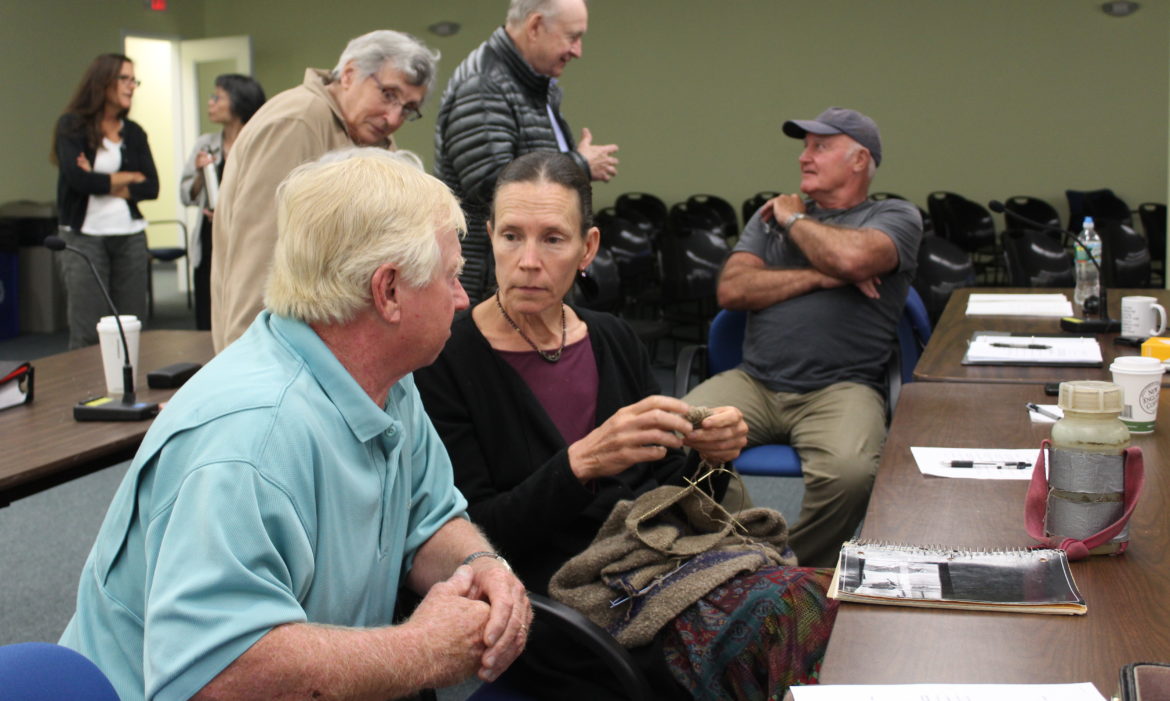 On Wednesday, the Site Evaluation Committee held a scheduling conference in Concord. From left seated are Brad Thompson, Kris Pastoriza and Dr. Campbell McLaren. Standing from left are Susan Schibanoff and Peter Grote.

CONCORD – Kris Pastoriza of Easton has to hope she can get the days off from her job as a breakfast cook to fight Northern Pass, but it is getting harder to plan as the possibility looms of adding additional dates to the already lengthy hearing process.

“You have to put things on hold and you have to juggle your schedule and hope people give you a day off to show up,” Pastoriza said during a break Wednesday at the Site Evaluation Committee’s scheduling conference. “Sometimes you can’t show up.”

That makes it harder for intervenors to ask the right questions without knowing what the witnesses said before during the quasi-judicial proceedings, she said. Many of the intervenors – including individuals, businesses and municipalities – travel long distances to the Concord hearings.

There have already been 27 full days of trial-like hearings before state regulators in Concord on Eversource’s high-voltage transmission line proposal to bring Hydro-Quebec electricity 192 miles from Pittsburg to Deerfield. 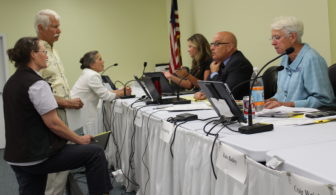 Intervenors ask questions during a break in the scheduling conference for Northern Pass hearings in Concord on Wednesday. Seated from left are attorneys Iryna Dore, Michael Iacopino and SEC administrator Pamela Monroe.

Fifteen more hearings are already scheduled from the end of August through the Sept. 30 deadline for the Site Evaluation Committee to decide whether to approve or deny the plan.

Dr. Campbell McLaren, also of Easton, said he can’t schedule work at all as a travelling physician because he needs to make sure he will be available to testify against the project. Otherwise his testimony will be rejected, he said.

As Michael Iacopino, counsel for the Site Evaluation Committee, questioned participants Wednesday on how much time they will need to make their case, it became apparent that either more hearing days may be needed or the decision deadline pushed back – or both.

“We definitely need more days,” Iacopino said during a break. But whether they will be added before the deadline or the deadline is extended will be up to the committee, he said.

A committee vote would be needed to push back the deadline, he said, and only if members believe that it was in the public’s interest.

Martin Murray, spokesperson for Northern Pass, has been adamant against pushing back the deadline.

“We understand the difficult nature of coordinating individual schedules and have made a number of attempts to work with officials and intervenors in hopes of adjusting the schedule to ‘avoid undue delay and assure the prompt and orderly conduct of the proceeding,’ including a recent motion to add more hearing days before the September 30 deadline and to extend hearing hours,” Murray said. The motion was denied.

“We remain confident that the SEC will make every effort possible to return a timely decision and we expect to receive all necessary state and federal permits by the end of the year,” Murray said.

“It’s wishful thinking that the SEC would do a blanket rejection,” Woodburn said during a recent phone interview.

But SEC approval wouldn’t necessarily signal the end of the process, Woodburn said.

“I happen to believe the Massachusetts RFP is critical. That’s the real game going on,” Woodburn said.

There are also several federal permits that Northern Pass must obtain, which Murray says he expects will be in place by the end of the year.

Woodburn was referring to the Massachusetts Clean Energy RFP. A Massachusetts law passed last year required the solicitation of bids for a total of 9.45 million megawatt hours of clean energy to help reduce carbon emissions.

Northern Pass recently submitted two bids to the Massachusetts RFP, but the winner won’t be announced until Jan. 25, 2018.

Woodburn said the “poor” towns along Northern Pass’ proposed route like Whitefield have already lost out to “rich” ones like Sugar Hill and Plymouth where the powerlines would be buried.

There is a great deal of distrust up north for Northern Pass, he said, citing a complaint he looked into recently from a project opponent that an SEC tour of the North Country route was ahead of schedule. As a result protesters showed up in Franconia after the bus had come and gone.

As one of the lawmakers who advocated for reforming the SEC process, which includes more opportunity for public comment, Woodburn said he is not sure it helped.

“I advocated for reform, but I’m not sure the reforms have made the process better,” he said. “Nobody can say they didn’t have the opportunity to address to committee.”

Woodburn said the wealthy and vocal communities get treated better than the poorer communities. “The plan we have today is those who shout the loudest and have the most resources have burial,” he said.

“New Hampshire is a great place to be rich and a very different one to be poor and middle class” because of the state’s regressive tax structure, Woodburn said.

If it gets approved, the SEC should look carefully at how to mitigate losses to the places most harmed, he said.

In June, Northern Pass filed a motion seeking extra hearing dates and longer hearing days that was turned down.

Several municipal groups argued at the time that with 1,000 properties affected by the project, there were many intervenors.

A motion filed by Steven Whitley argued that intervening parties do not have the same “unlimited resources” as Northern Pass.

He said other attorneys working for the applicant occasionally attend the hearings and assist in the proceedings at the Site Evaluation Committee, including Mark Hodgdon and Benjamin Hanna, “as well as other unknown associates and numerous support staff.”

Many intervenors in this case are pro se and/or are represented by one attorney who is responsible for handling all aspects of the case, he said.

The Aug. 30 hearing will end at 3:30. From 5 to 8 p.m. that day, the committee will take written and oral statements from the public.

To make an oral statement, people must send an email by Aug. 21 to marissa.schuetz@sec.nh.gov and include name, address, position on the project, and whether special accommodations are needed.

If there is extra time, people who haven’t signed up will be able to speak.

There are still two more witnesses for Northern Pass to finish making its case, and 146 intervenors as individuals or serving on panels to make their case after that.

SEC Attorney Iacopino said he will first have to find out the availability of SEC members to add hearing dates. Any change in the Sept. 30 decision deadline could only happen by a vote of the committee, he said.