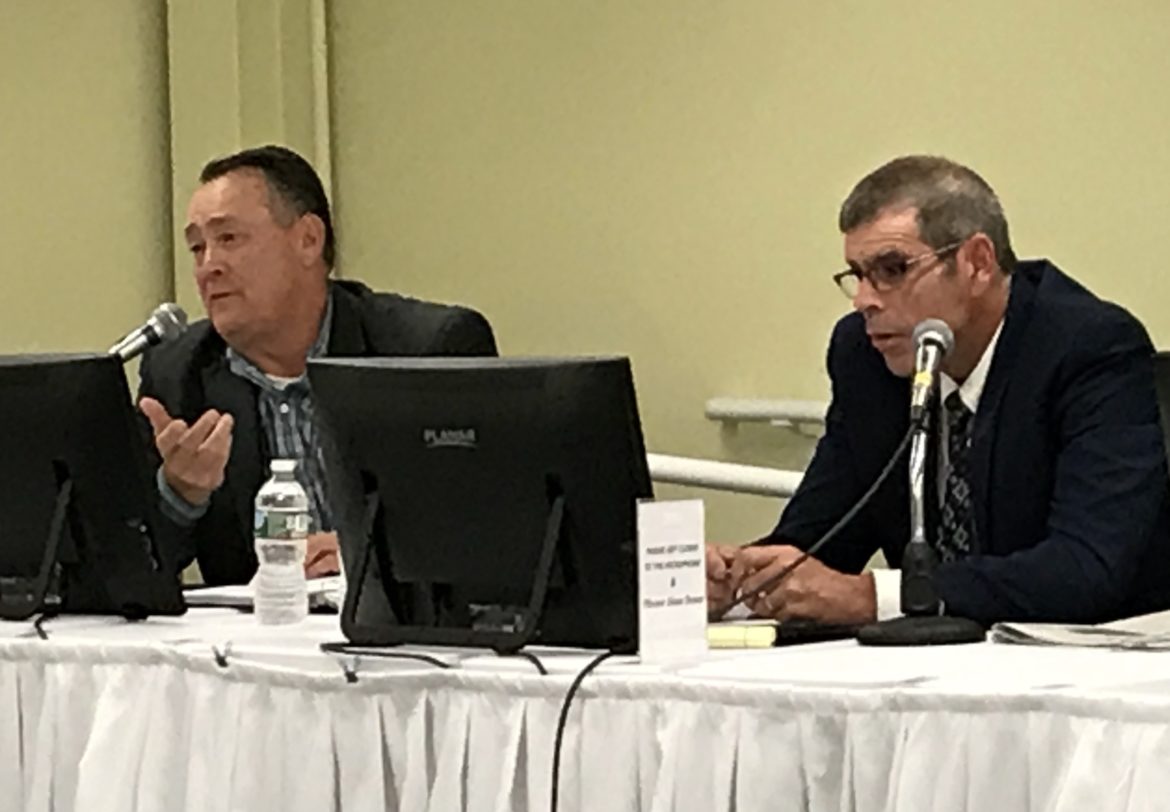 Representatives from two electricians’ unions testified Monday that Northern Pass construction will be a boon to their members.

Tiler Eaton, representing IBEW 104 whose members do outside electrical work, estimated 75 to 85 percent of his local members would work on the project during the construction period. Local 104 has about 500 members, he said, and about 700 more in Massachusetts.

Joe Casey, representing IBEW 490 whose members do inside electric work, said he expects about 50 percent of the 300 local members would work on the project.

“This Northern Pass project will be the best project that everyone will want to work at in New England,” Casey said. “This is desired new construction we all look forward to. We won’t have any problems manning this one.”

Under a new Project Labor Agreement between the union and project developer Eversource, unionized New Hampshire workers would be the first hired, followed by Massachusetts union workers and then non-union workers from New Hampshire.

Was the agreement changed at Northern Pass’s request, Pappas asked, and Casey said the two parties mutually agreed to the changes.

He said the unions did discuss the bid with Eversource during negotiations and moving Massachusetts union workers into the second priority.

Casey said the old agreement was approved in 2013 and since that time, many working conditions have changed and the document needed to be updated.

Eaton said the largest New Hampshire company that could have provided non-union workers has been purchased by the general contractor for the project which employs union workers. “We got about a 100 member bump,” he said.

Attorney Bob Baker noted the labor agreement exempts many workers including those in logging, road construction, environmental and geothermal testing, and drivers of Eversource vehicles.

Many specialized services such as splicing the cable and flying helicopters to set poles are also exempt under the agreement, Baker noted.

“We had said we wanted to ensure the people of the North Country were part of this project, the stuff they do everyday,” Eaton said. “We want them to be part of it while we are not saying they must join a union.”

But several questioners noted there is no guarantee Eversource has to hire local people for logging, clearing land or driving trucks.

Eaton said he was 99.9 percent confident Eversource intends to hire local people. “We believe they will because that is part of the understanding,” he said.

He and Casey said the agreement gives the unions the leverage to help local workers. “We want to make sure employees who work on the  project are treated fairly and paid fairly.”

The 1,090 megawatt project was first proposed seven years ago. The Site Evaluation Committee recently delayed making its final decision for five months. Instead of making a decision at the end of this month, it will now be delayed until the end of February, 2018.

Hearings continue Tuesday on the project.