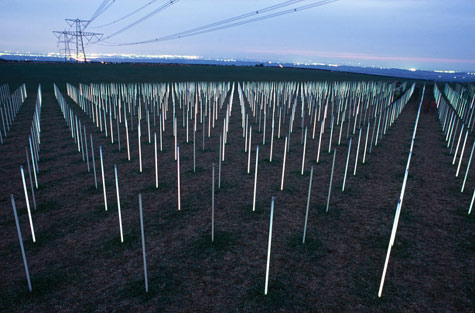 Critics of Dr. William Bailey’s testimony at last week’s Northern Pass hearings that the project poses no threat to public health and safety call him a “hired gun” out to serve only the interests of the controversial 192-mile high-voltage transmission line proposed to run from Pittsburg to Deerfield.

Dr. Denis Henshaw, a retired professor of Human Radiation Effects at the University of Bristol in England, called Bailey a “professional denialist” after reviewing his testimony that is posted on the state Site Evaluation Committee’s website.

In fact, the truth about the dangers associated with high voltage transmission lines is the exact opposite of the impression Bailey tried to convey in his testimony, Henshaw said. “I find it incredible there isn’t some properly argued evidence at this New Hampshire hearing.”

It’s not about taking sides on various transmission projects, he said.  “The truth is EMF (electromagnetic fields) are bad for you. That’s what the evidence says,” Henshaw said.

Henshaw and others questioned how Bailey could tout powerline safety after he served on an international panel 16 years ago that unanimously found electromagnetic fields pose a possible leukemia risk to children.

Bailey and Dr. Gary Johnson, both employees of Exponent, Inc., testified last week for Northern Pass/Eversource Energy before the state Site Evaluation Committee that will ultimately approve or deny Northern Pass’ application for the $1.6 billion project.

“Dr. William Bailey is an internationally recognized expert in the potential effects of electric and magnetic fields, and Dr. Gary Johnson has extensive experience with the audible noise, radio noise, and ozone that may be produced by high voltage power systems. Both experts are highly qualified to assess the Northern Pass project and provide objective testimony to the SEC. An important factor in the decision to retain the services of Exponent Inc. was the company’s recognition for independence and integrity,” Murray said.

Murray also said it wouldn’t be proper to interview Bailey and Johnson “as active expert witnesses in an ongoing adjudicative process.”

Dr. David Carpenter, a public health physician who serves as director of the Institute for Health and the Environment, said studies that show a link to childhood leukemia from electromagnetic fields were almost all funded by the government or independent agencies, while the ones that found no association were paid for by the electric industry.

He believes Bailey relies on publications funded by the electric utility industry. “That is such a blatant conflict of interest in my judgement, that those studies do not deserve attention,” said Carpenter, who is also a professor of environmental health sciences at UAlbany’s School of Public Health.

The World Health Organization has said exposure to magnetic fields from AC transmission lines is a known possible human carcinogen and found strong evidence that there is an increase in leukemia in children exposed to high magnetic fields, Carpenter said.

Childhood leukemia is the best documented, but there is also a lot of evidence of a link to brain cancer and breast cancer, Carpenter said.

Studies show beyond about 300 meters, there is no elevated risk of leukemia, he said. The farther away, the better, he said. Buried lines are very safe, he said, referring to AC lines.

According to Northern Pass’ website, the transmission line would carry DC, or direct current, from Pittsburg to Franklin, then AC, or alternating current, in the more heavily populated areas from Franklin to Deerfield through Concord. The transmission lines would bring 1,090 megawatts of hydroelectricity from Hydro-Quebec through New Hampshire to the New England grid.

Attorney Roth questioned Bailey at last week’s hearing about a public meeting in Holderness on March 14th of last year, saying Bailey quoted the World Health Organization in saying “that the evidence does not confirm the existence of any health consequences of exposure to low level electromagnetic fields.”

Roth pressed Bailey as to why he didn’t go on to explain from the WHO web page that there are gaps in what is known. He asked Bailey to look further down the WHO page where it said: “A number of epidemiological studies suggest small increases in risk of childhood leukemia with exposure to low frequency magnetic fields in the home.” 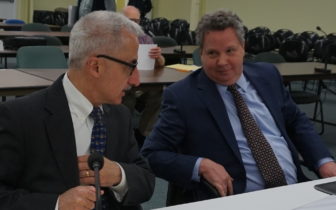 Attorneys Tom Pappas, left, and Peter Roth, counsel for the public, are pictured at the Northern Pass hearings last week.

Roth said: “Now, you didn’t quote that in your testimony or provide that to the people in Holderness, did you?”

More than two dozen quasi-judicial hearings on Northern Pass are planned through July starting Monday, May 1. The state Site Evaluation Committee will decide by Sept. 30 whether to approve or deny Northern Pass’ application.

Dr. Henshaw, the retired professor at the University of Bristol, said he first came across Bailey at the Beauly to Denny (Scotland) Powerline Enquiry in 2005. Henshaw represented the objectors as an expert witness.

“The trouble with Bailey is that his science is so very weak, unsound and flawed,” Henshaw said.

As to Bailey’s testimony in Concord about health effects of transmission lines, “It’s like getting in a time machine and going back 20 years when knowledge was very primitive,” Henshaw said.

While much of the attention relative to health effects is relegated to AC lines, there is also a lot of evidence that electrical fields from DC lines have the same effects as magnetic fields, Henshaw said.

The DC lines are not true DC because they contain fluctuations in the currents being carried known as “dirty electricity,” which generate magnetic fields, and less research has been done on them, Henshaw said.

Henshaw also brought up a scholarly paper that was published in April in which Bailey is listed as an author. It asks the contributors to disclose outside interests, but doesn’t show Bailey disclosed any interests.

“Bailey actually gives his address as Exponent. I find that incredible,” Henshaw said. “His address is Exponent which specializes in representing industry.”  The publisher of the paper didn’t immediately respond to an email inquiry.

Louis Slesin, PhD, editor and publisher of Microwave News based in New York City, Tweeted about the April article circling Bailey’s name, the words “no competing interests” and “Exponent” under author’s details.

“Bailey’s been a hired gun ever since I can remember,” Slesin said. “He’s there to protect the interests of the client. I’ve seen him in action many times,” Slesin said. 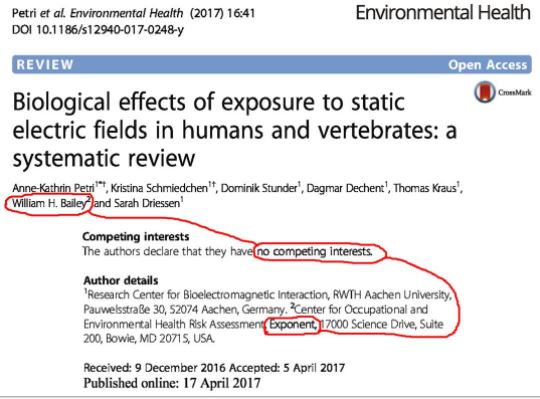 Slesin, too, noted Bailey’s participation in the 2002 study. “He was there when the decision was made to classify it as a human carcinogen.” The decision was unanimous, he said.

Slesin wrote about Bailey in a Microwave News post on Nov. 26, 2013 when Bailey was a consultant to EirGrid, the Irish state-owned power line company, at the time.

Slesin wrote: “Bill Bailey of Exponent, a consultant to EirGrid, was flown in from the U.S. to sit in the studio audience and support (CEO) Slye. The scientific evidence, he said, does not demonstrate a health risk from exposure to EMFs encountered in daily life.”

Dr. Stanton Glantz of the UC San Francisco’s Center for Tobacco Control Research and Education, has followed the work of Exponent, Inc.

“(Exponent experts) have worked for tobacco companies, chemical companies, just about anybody you can imagine. They basically specialize in coming up with scientific looking reports that serve the needs of their clients,” Glantz said. “They did a lot of work for the tobacco industry contesting the evidence that second-hand smoke was dangerous.”

Exponent also did a lot of work for Toyota, he said, referencing a Los Angeles Times article. “If you cast things as your expert opinion, you can get away with a lot of stuff. You can make a lot of money.”

There’s a small number of firms that specialize in science denialism and obfuscation, Glantz said. “They are one of the bigger ones,” he said of Exponent, Inc.

Maureen Quinn, an intervenor with the non-abutting Ashland-Deerfield property owners group, is a semi-retired public health nurse who retired as a captain in the U.S. Public Health Service, eight of those years working with children who suffered from various forms of cancer.

She questioned Bailey about a number of studies that show a 1 1/2 times to a doubling of the risk of childhood leukemia associated with powerline magnetic field exposure. While the science can’t explain why it happens, the numbers should make people in New Hampshire wary, Quinn said.

“I just really think it’s important that people understand we could be potentially putting people’s lives at risk for something that is not necessary for regional energy needs…
“We don’t want to be putting people at greater risk when there are alternatives and we are not meeting a critical need,” Quinn said.