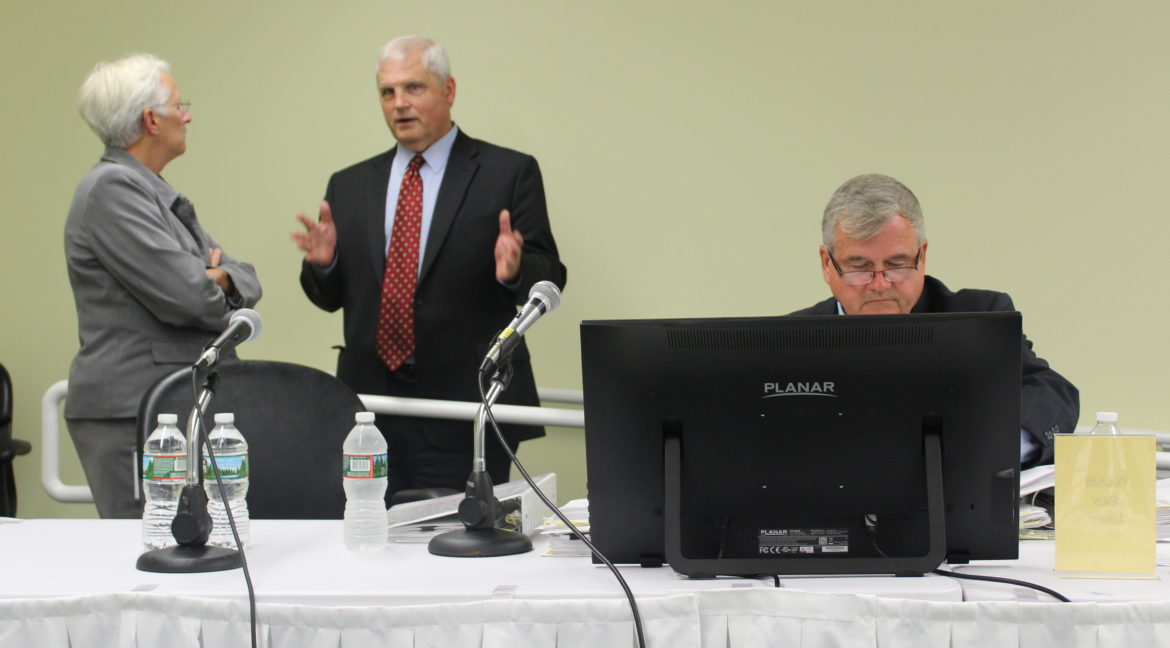 The intervenor group from Pittsburg, Clarksville and Stewartsown submitted this video as pre-filed testimony, but Northern Pass doesn’t want it shown during the adjudicative hearings that are ongoing in Concord.

Still, there has been no decision on whether a video showcasing the breathtaking natural beauty of the North Country – much of it taken by a drone-mounted camera along portions of the proposed 192-mile route – will be shown to the current subcommittee decision makers. (see above)

The seven-member SEC subcommittee, including chairman Martin Honigberg, will ultimately decide by majority vote whether the state green lights the $1.6 billion plan to bring Hydro-Quebec electricity from Pittsburg to Deerfield, then on to the southern New England grid.

Still no ruling, either, on whether the subcommittee will order Northern Pass/Eversource to turn over to the public counsel the unredacted bid it submitted to the Massachusetts Clean Energy RFP, along with other legal wrangling that goes on long after the lights are turned off at the end of hearing days at 49 Donovan St. in Concord.

Varney is the president of Normandeau Associates of Bedford, which has been hired as Northern Pass experts. He previously served as the New England Regional administrator for the Environmental Protection Agency and commissioner of the state Department of Environmental Services.

“(There will) be no significant impact, permanent impact associated with the operation of the project,” said Varney.

There will be temporary impacts during construction, he said. “Based on the information I reviewed, I think they can be carried out in a reasonable way with minimal impact on adjacent land uses,” Varney said.

Under questioning by Thomas Pappas on behalf of the Counsel for the Public on Monday, it took a number of questions to get to whether Varney analyzed any one business or farm in any of the 31 communities that would host the project if it is approved.

Pappas: “You looked at the impact on each of the 31 municipalities that host the project. Is that right?”

Varney: “Yes, in a holistic way going from north to south for the entire project.”

Pappas: “I understand you didn’t do an analysis of any specific location within any of the towns. Is that right?”

Varney: “We describe the uses that were prevailing land uses along that corridor and looked at distances associated with various land uses as well.”

Jason Reimers, an attorney representing the Society for the Protection of New Hampshire Forests, asked Varney if he did his analysis on orderly development in 2015 after Normandeau Associates had worked for Northern Pass for five or six years on environmental matters. Varney said that was true.

Reimers: “About how much money had Northern Pass paid Normandeau for its work?”

Reimers: “Can you ballpark it?”

Reimers: “More than a million?”

Varney: “I can’t recall. There was a lot of field work done in a short period of time. I can’t recall which year that was.”

Varney said his hourly rate was less than $600, but he wasn’t sure how much less.

Visual impact expert Terrence DeWan was asked on his last day of testifying Monday why he included the Mountain View Grand Resort in Whitefield as a scenic resource even though technically there is no public right of access for non-guests.

He previously testified that private property and attractions like Santa’s Village wouldn’t be considered scenic resources because they charge a fee.

“There are a few places like (Mountain View Grand Resort) which I think are iconic in the state of New Hampshire,” DeWan said.

Although the public has to pay to enjoy some of the resort’s amenities, they can still walk around, sit on the front porch and feel welcomed, DeWan said.

A subcommittee member asked DeWan if the resort’s owner couldn’t ask people to leave the porch since it is private property.

The Mountain View Grand Resort opens its arms to the public, DeWan said.

He was then asked how that would differ from other places where people go to spend the night.

“That’s an interesting question that we debated long and hard …,” DeWan said.

Hearings will continue Tuesday, Thursday and Friday this week, with four more next week, then 31 additional hearings from October through December. Intervenors will begin making their case after Varney is finished testifying for Northern Pass.

Visual Expert: Exactly Where 52 Miles Of Northern Pass Would Be Buried Still Unknown