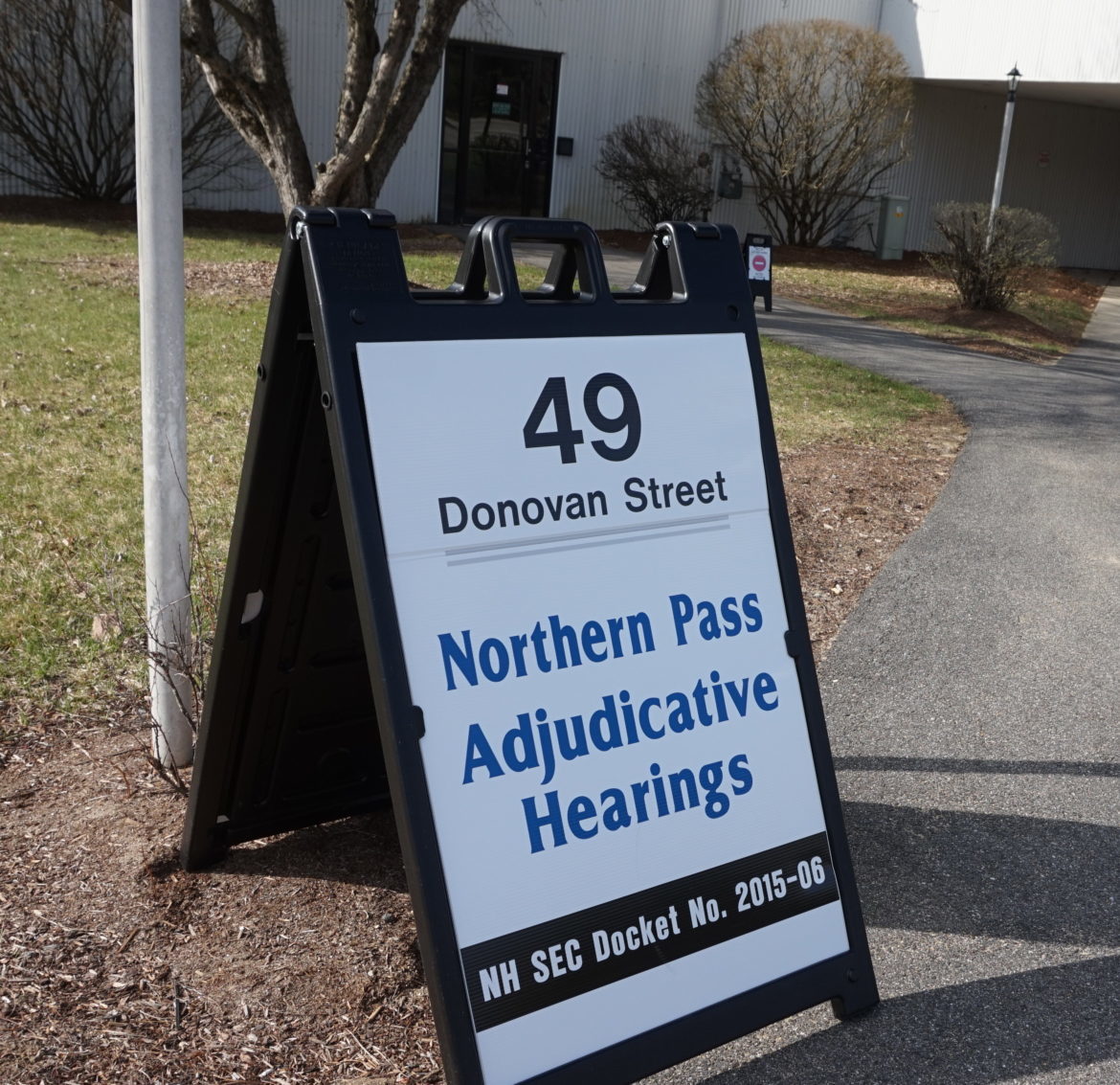 Sign in front of 49 Donovan St. in Concord where the adjudicative hearings for Northern Pass before the state Site Evaluation Committee are being held.

CONCORD — State regulators decided Thursday to postpone their final decision on the $1.6 billion Northern Pass Transmission project for five months and extend adjudicative hearings until the end of the year.

The Site Evaluation Committee originally had a Dec. 18, 2016, deadline to make a decision, one year after it deemed Eversource’s application for the 192-mile, high-voltage transmission line complete, but last year moved that deadline to Sept.  30, 2017.

After 30 days of adjudicative hearings on the project, the Site Evaluation Committee has not heard from all of Eversource’s witnesses with more than 100 yet to be heard from the Counsel for the Public and project intervenors.

SEC chair Martin Honigberg called the committee’s Sept. 30 deadline unrealistic and a Dec. 31 deadline was proposed, but Peter Roth, Counsel for the Public, suggested a more realistic deadline would be Feb. 28, 2018.

“We still have an enormous number of witnesses and we don’t know the available dates in October and November and then the holidays,” Roth said. “The end of February is a more comfortable time period in light of what we heard today.”

But Eversource’s lead attorney, Barry Needleman of McLane, Middleton Professional Association, noted the committee was already well beyond its statutory deadline of December 2016.

But he agreed — given the work that remains — a deadline extension is needed.

The committee articulated why it is in the public’s interest to extend the deadline, and another critical interest is that of the applicant who deserves to have the proposal considered and decided in a timely manner, Needleman said.

He said the company would like “clarity” as soon as possible as would many of the people participating in the process.

Roth and others noted it would take an estimated 39 days to complete the testimony and cross-examinations of witnesses for the Counsel for the Public and other intervenors, but Honigberg said all of the planned “friendly cross-examination” is unrealistic and not needed.

“Many (witnesses) know little beyond the boundary of their properties,” he said. “There needs to be some reasonable limits placed on friendly cross-examination. To go on for days and days and days is unrealistic and unreasonable.”

The committee has about 30 days available for hearings before the Dec. 31 deadline. The deadline for legal briefs is the end of January.

The committee does not have hearings scheduled for next week but has scheduled four days of hearings a week during the final three weeks of September.

Passionate People From Concord to Clarksville Speak Against Northern Pass