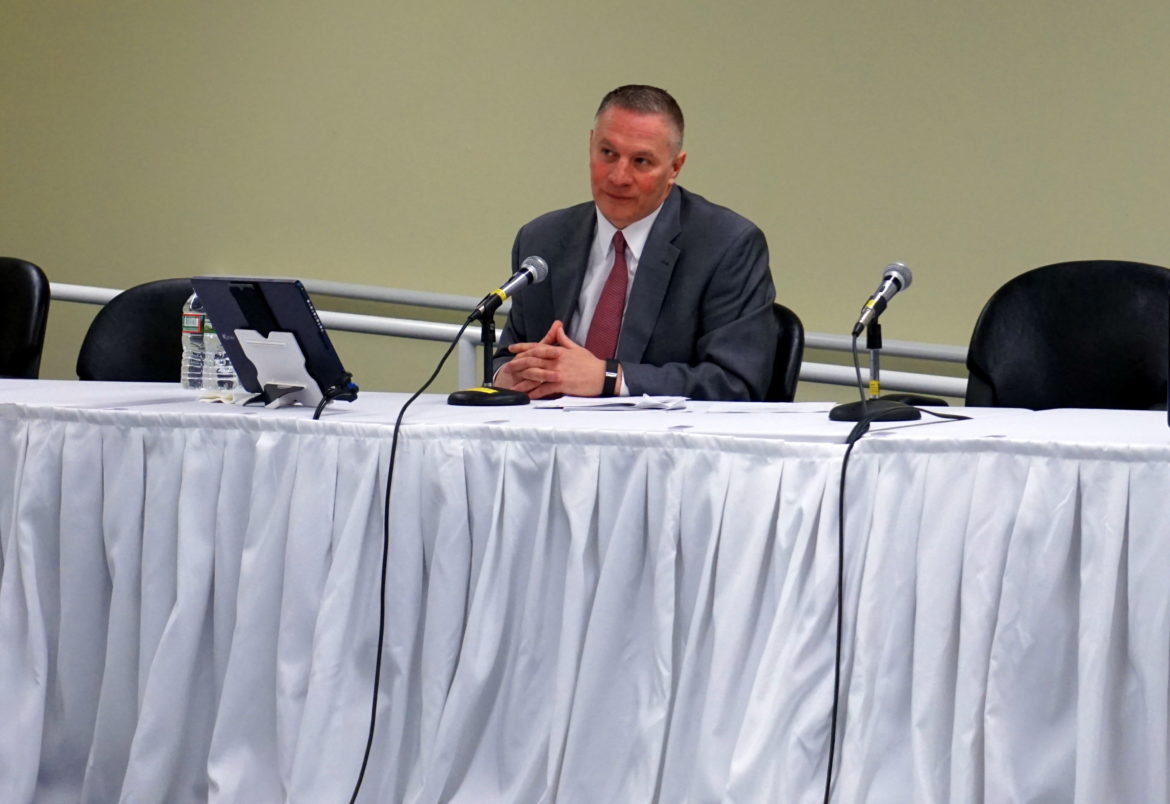 Eversource NH's president William Quinlan testifies at the first hearing before the Site Evaluation Committee in Concord on the Northern Pass project in 2017.

CONCORD — Testifying on Thursday, Eversource executive William Quinlan said there is a “highly unlikely” scenario in which New Hampshire ratepayers could bear some of the costs of Northern Pass.

“There is a scenario, but it is very remote, very unlikely,” Quinlan said.

The cost would be very low and Eversource is committed to not pursuing such a course, Quinlan said.

Quinlan was responding to a question from attorney Steven Whitley about Northern Pass’ status as a public utility and his statement that New Hampshire’s ratepayers would not have to pay for building the line.

Quinlan also said Eversource Energy researched what it would cost to bury the entire 192-mile Northern Pass transmission line proposed from Pittsburg to Deerfield, but decided the extra $1 billion price tag was just too much.

Quinlan said 60 miles will be buried as he testified under oath as the first witness in the first day of trial-like hearings that will ultimately determine whether the state approves or denies the controversial $1.6 billion project. 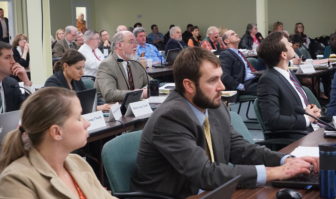 Hearing room at 49 Donovan Street in Concord was crowded Thursday as the final trial like phase of the Northern Pass hearings got underway.

Quinlan was also asked for details about the $5 million in loans to Balsams Resort developer Les Otten.

“The loan to the Balsams of about $5 million is truly a loan. It could be paid back or converted to equity,” Quinlan said.

Jason Reimers, the attorney representing the Society for the Protection of New Hampshire Forests, asked if the $5 million was in any way conditioned on the Balsams or Otten voicing public support for Northern Pass, or for not publicly disparaging the project.

“I don’t know the answer to that,” Quinlan said.

Quinlan said he did know that the loans were not contingent on Northern Pass moving forward, adding there were some conditions, but they were relative to progress being made at the Balsams.

About 100 people, many of them intervenors in the project, attended the hearing before the state Site Evaluation Committee on Thursday, with some wearing orange shirts to show their opposition.

By a majority vote, the committee will ultimately decide whether the state will approve or deny the plan to bring 1,090 mw of hydropower from Canada’s Hydro-Quebec.

Quinlan was the first witness to testify under oath with a half dozen lawyers and citizens cross-examining him throughout the day. The hearings are expected to continue through July at a large conference room at 49 Donovan St. in Concord.

Quinlan also testified about Eversource’s Forward NH Plan. It was pointed out that the plan was only filed with the New Hampshire Secretary of State last month even though it had made early commitments, including $5 million in loans to Otten.

The $200 million Forward NH Fund is based on Eversource’s contribution of $10 million a year for 20 years to support economic development, community betterment, tourism and clean energy innovation.

Quinlan was asked if it was true that what most people complained about on his listening tours was the visual impact of the tall towers.  He said that wasn’t the case.

It depended on the stakeholders, he said. The benefits to New Hampshire were mentioned a lot, along with the visual impact, Quinlan said.

Attorney Tom Pappas, counsel for the public, questioned Quinlan about a press release from Hydro-Quebec saying it wouldn’t pay a penny for the line and that Americans would pay.

“Is Hydro-Quebec saying that American consumers will pay for Northern Pass through electric rates?” Pappas asked.

Quinlan responded: “I can’t speak for what Hydro-Quebec is saying here.”

Quinlan explained the initial costs would be borne by Northern Pass Transmission, which would recover the costs from Hydro-Quebec’s using the transmission lines. 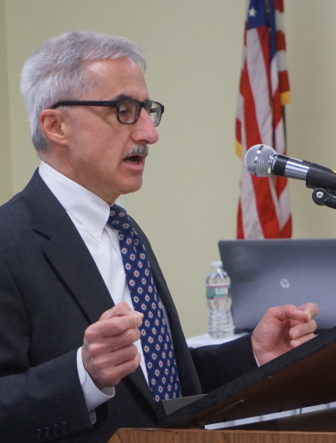 Quinlan also testified that the $80 million estimated savings to New Hampshire’s electric consumers are estimated now to be only $62 million, mainly because of cheap natural gas prices.

In a highly volatile market, that could decrease further, Pappas said.

“It can’t go much lower,” Quinlan said, “It’s difficult to see a scenario where it could go lower.” Quinlan pointed to the anticipated retiring of power plants.

Pappas said that Roger’s Campground in Lancaster was provided an electric vehicle charger from the Forward NH Fund conditioned on agreeing to support the project and to not disparage it in the press.

Quinlan also said under cross-examination that there are no documents legally binding Northern Pass to the $200 million it guarantees over 20 years for the Forward NH Fund.

“It is our corporate intention,” Quinlan said.

Phil Bilodeau briefly cross-examined Quinlan on a more personal note. Bilodeau’s backyard is close to the Deerfield substation where the project will end in New Hampshire.

“Do you own a home?” Bilodeau asked Quinlan.

Bilodeau quizzed him on what he would expect if a gas station suddenly moved into his neighborhood.

Quinlan said that could be viewed as a positive thing.

Northern Pass spokesperson Martin Murray said he was pleased to be at this stage of the proceedings.

“It’s been an incredible process and gratifying to get to this point, which is totally fact-based,” Murray said.

There are a lot of benefits to New Hampshire, he said.

“This is a great opportunity and important for the people of New Hampshire,” Murray said. He passed out a fact sheet touting the benefits to New Hampshire.

“Northern Pass is designed to bring a reliable source of competitively priced, clean, renewable hydropower into the region…,” the fact sheet said.

Northern Pass, through its Forward NH plan, will bring considerable benefits to New Hampshire for a total of approximately $3.8 billion in economic development and jobs programs, energy savings, tax revenue, an increase in New Hampshire’s GDP, as well as significant environmental benefits, according to the fact sheet.