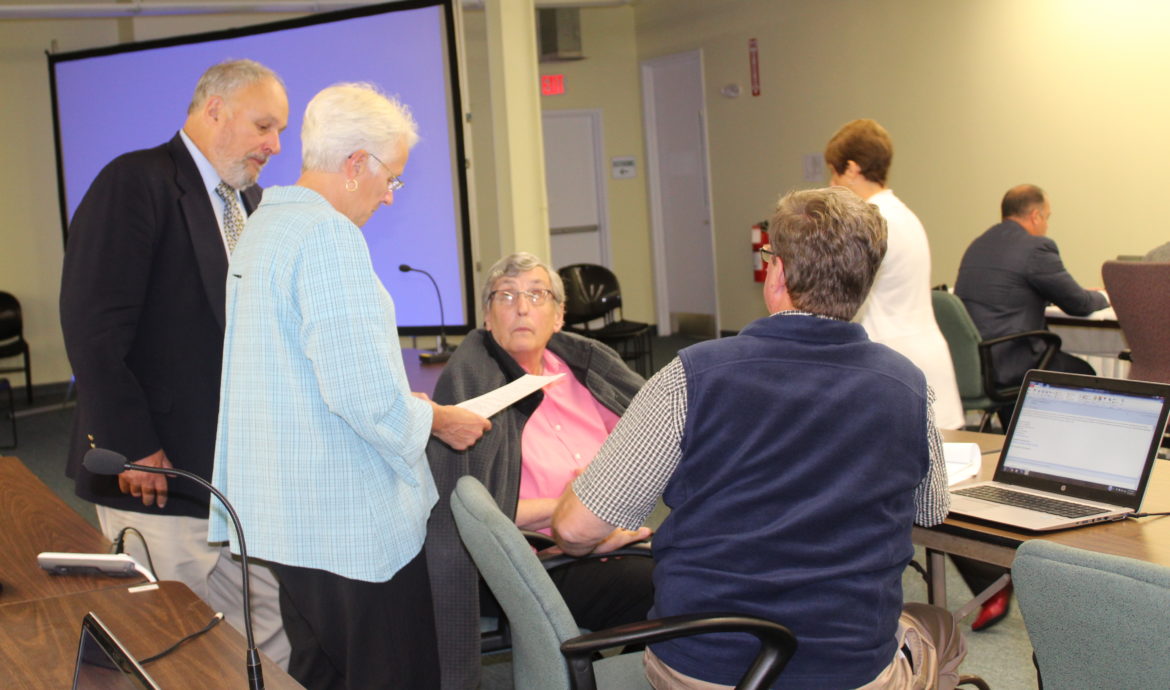 Standing are Pam Monroe, administrator of the Site Evaluation Committee and attorney Bob Baker. Seated are Will Abbott of the Society for the Protection of New Hampshire Forests and intervenor Susan Schibanoff at Tuesday's Northern Pass hearing in Concord.

CONCORD – Over Northern Pass’ objection, Site Evaluation Committee Chairman Martin Honigberg has ordered the project to recall its construction experts for limited cross-examination about “purported inaccuracies” and exceptions it is seeking from the Department of Transportation.

Tuesday’s order grants a motion filed by the Grafton County Commissioners in part by recalling the panel, but denied their request to suspend the adjudicative hearings in the meantime, saying they have already pushed ahead the committee’s final decision deadline to March 2018.

The Grafton County Commissioners, who are intervenors opposed to the project, filed the motion five weeks ago noting that Northern Pass filed numerous “exception requests” with the state Department of Transportation.

The requests ask to deviate from the requirements of the DOT Utility Accommodation Manual, which governs the installation and operation of underground utility structures, according to Honigberg’s order.

The commissioners also said that during a mid-summer meeting with DOT officials Northern Pass was notified that field reviews revealed several locations identified in the requests “had existing facilities that were incorrectly shown/described or not shown on the plans,” Honigberg wrote.

The commissioners also argued that DOT representatives raised concerns about the accuracy of existing facilities and the right-of-way as presented on the project maps, he said.

“In order to properly assess whether the (SEC) subcommittee has been provided with sufficient information regarding the exception requests, it is fair to require (Northern Pass) to recall all of the witnesses that participated on the construction panel for cross-examination on the limited issue of the progress of DOT’s review process,” Honigberg wrote.

“In addition, while the applicant claims that the plans as filed are sufficient for the subcommittee to exercise its review, there is new evidence indicating potential inaccuracies in the underground construction plans filed with the subcommittee,” Honigberg wrote.

Honigberg went on: “Considering that this information became available to the intervenors following examination of the applicant’s construction panel, it is fair and reasonable to require the applicant to recall its construction panel witnesses to address any inconsistencies discovered as a result of a review of the exception requests.”

Northern Pass/Eversource’s proposal to build a 192-mile high-voltage transmission line from Pittsburg to Deerfield has been the focus of the quasi-judicial hearings since April. Northern Pass plans to bring 1,090 mw of electricity from Hydro-Quebec through New Hampshire to the New England grid in the $1.6 billion project.

Robert W. Varney, a former Site Evaluation Committee chairman, who also served as commissioner of the Department of Environmental Services and EPA regional director, is due back to finish testifying as Northern Pass’ expert on orderly development on Thursday after leaving Tuesday’s hearing early because of illness. He is president of Normandeau Associates of Bedford.

Varney: “I formed an opinion about the project as a whole and my opinion was that it represented orderly development for the region.”

Reimers: “You didn’t form an opinion about any particular community?”

Varney: “No. The SEC decision relates to the entire project.”

Reimers: “If for the sake of argument the impacts are minimized in areas of existing rights of way such as in Franklin, you would agree that minimizing the impact in Franklin has no relation to whether the project would unduly interfere with the region in Pittsburg, Clarksville and Stewartsown, wouldn’t you?”

Varney: “My opinion was based on the project as a whole.”

Honigberg has also ordered Cherilyn Widell, president of Widell Preservation Services in Chestertown, Maryland, to return for further testimony as well on historical resources relative to the project.

Kris Pastoriza, a member of the Easton Conservation Commission, was annoyed by the schedule changes and what they will mean for intervenors.

“Typical of the SEC process in the NPT docket, that intervenors are supposed to shift their schedules with a day or two of notice because of Applicant/SEC shortcomings, like an incomplete application that the SEC accepted, a political decision that now leads to the need for witness panel recalls,” Pastoriza said.

She went on to say: “Sununu is driving a project he knows nothing about. Have you ever seen him at a hearing?”

Pastoriza was also concerned “that the confidential cultural landscape reports, two large binders, were yesterday, for the first time, available to intervernors: left in the court reporter’s room for anyone to look at.”

She was referring to a room at 49 Donovan St. in Concord where the hearings are being held.

“Presumably they are draft documents not yet approved by (Department of Energy), yet intervenors are supposed to read them (at 49 Donovan, in our free time) to be ready to question (Cherilyn) Widell, NPT’s historical witness, next week,” Pastoriza said.

For much of Tuesday afternoon, the Site Evaluation Committee’s administrator Pam Monroe and attorney Michael Iacopino were scrambling to change the adjudicative hearing schedule.

Scheduling is no easy task since there are about 22 intervenors – individuals, businesses and groups with legal status to participate in the quasi-judicial adjudicative hearings.  And many of the various experts live out of state and have already moved on to other projects.