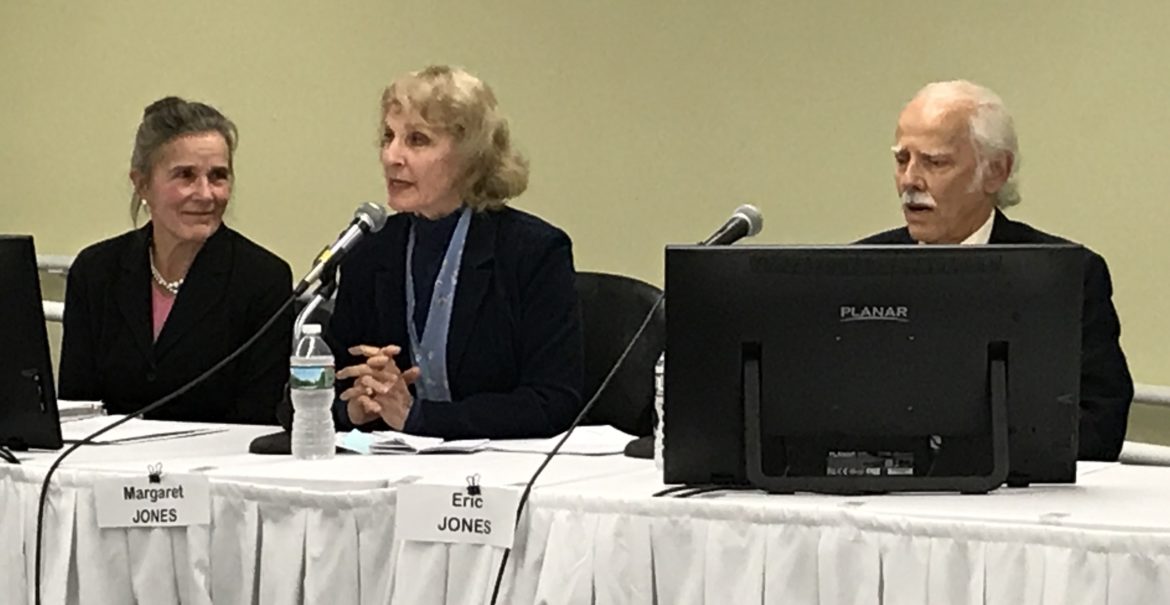 Northern Pass Transmission project intervenors from left to right, Susan Percy of Stark, and Eric and Margaret Jones of Glencliff, testify Wednesday before the Site Evaluation Committee's adjudicative hearing on the $1.6 billion, 192-mile project from Pittsburg to Deerfield to bring Hydro-Quebec electricity to New England.

CONCORD — Intervenors affected by the Northern Pass Transmission project told state regulators on Wednesday how the new high-voltage lines would adversely impact their lives and properties.

The intervenors ranged from a couple abutting the current Deerfield transmission substation that will be expanded to connect the project to the New England grid to a couple who own large tracks of wetlands in the North Country, hoping to preserve the land for centuries to come.

Eversource, the developer of the $1.6 billion, 192-mile transmission line from Pittsburg to Deerfield, presented its case for the project with experts and supporters from April to the first week of October. Now the Counsel for the Public as well as intervenors and opponents are presenting their arguments.

“You have been listening to four months of experts and others who had something to gain from their testimony,” Attorney Arthur Cunningham, representing the Percy Lodge and Campground in Stark, told the Site Evaluation Committee. “My clients have everything to lose.”

The owners of the newly developed lodge and campground, were among those testifying in opposition to the project on Wednesday.

Eric and Margaret Jones of Glencliff own 750 acres of land in Northumberland and Stark bisected by the existing right-of-way that would hold the new transmission line.

Their land is part of a 2,300-acre area that is the largest fresh water wetlands in the state from Northumberland down to Lancaster, Eric Jones told the committee.

Wetlands cover much of the property, he said, and an important part of the watershed that drains into the Ammonoosuc River and then into the Connecticut River. About 90 percent of the right-of-way is wetlands, he added.

When attorney Tom Pappas, representing Counsel for the Public, asked Jones to explain how the damage would be permanent, Eversource’s lead attorney Barry Needleman objected saying Jones was not a wetlands expert.

SEC chair Martin Honigberg allowed Pappas to have Jones establish his credentials. But when he began asking questions again about impacts to wetlands, Needleman objected again and Honigberg agreed prompting Pappas to ask if someone has to be an expert to testify and Honigberg said, “No.”

Jones also questioned why the state Department of Environmental Services approved mitigation a plan to replace destroyed wetlands that does not include constructing new wetlands in the same area instead of other locations around the state.

“Most people do not buy wetlands. We want wetlands to save for you folks and your kids,” Jones noted. “If our mission is stopped or blocked, why aren’t we compensated? Everyone is compensated but the property owner.”

He and his wife bought the property primarily to “regrow old growth,” by attaching easements that prohibit logging or development for several hundred years.

“While everyone else is chopping things down,” Jones said, “We are going in the opposite direction.”

Philip and Joan Bilodeau’s home on Nottingham Road in Deerfield abuts Eversource property where a new substation will be built to connect Northern Pass to the New England power grid.

Philip Bilodeau said a small substation abutted the property when they bought it 40 years ago and has been expanded since then but will more than double in size as part of the project.

Their home has a back porch where they sit and watch wildlife, he said, while a forest and hill shield their view of the current substation.

Eversource intends to level the hill and cut much of the vegetation, he noted, and construction plans include working six days a week from 7 a.m. to 7 p.m. for 18 to 24 months.

The area is rural, Bilodeau said, while construction will bring heavy equipment, trucks and more traffic, noise and probably blasting.

“We enjoy the wildlife we see now, turkeys and such,” he said. “All the construction will clearly displace any wildlife in the area and replace their habitat forever.”

Committee member Patricia Weathersby asked Bilodeau if there were any conditions the panel could place on the project to address their concerns.

“I can’t see any conditions you could impose on building a 16-acre substation that it would not impact us,” Bilodeau said.

Eversource had hoped to have all federal and state permits by the end of this year with construction to begin next year and the transmission line finished by the end of 2020. The Site Evaluation Committee is not expected to make a final decision on the high-voltage transition line until the end of February 2018.

If it receives all of its permits, project officials said last month that construction could begin in April.

Adjudicative hearings on the project continue Friday with the showing of a 21-minute video called “Negative Impacts of the Northern Pass Transmission Line” featuring North Country people speaking against the project. (see below)