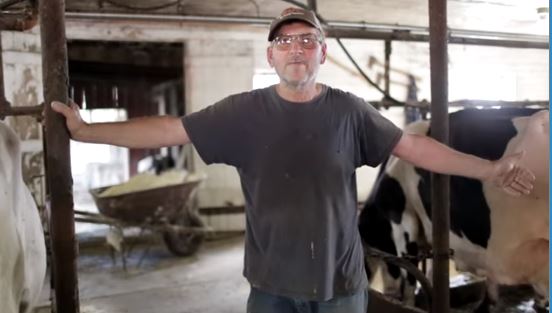 Stewartstown's dairy farmer Rod Mcallaster was featured in an anti-Northern Pass video that will be shown on Friday Oct. 20 at the Northern Pass adjudicative hearing in Concord.

Rod Mcallaster milks 80 cows twice a day on his Stewartstown farm, but he’ll be heading south to Concord next Friday to a Northern Pass hearing to testify that he was indeed featured in a video opposed to the project.

State regulators ruled against Northern Pass and ordered the video be shown at the adjudicative hearings, but said all 10 people featured in it must be available for cross-examination as lawyers for the project had insisted.

It will be quite an outing for the 65-year-old Mcallaster. This will be his first trip to Concord; he’s been too busy with the farm and chores to have ever driven farther south than Littleton.

“The whole project in general stinks,” Mcallaster said in a phone interview Friday night. “Having to go down there is small price to pay if we can stop it.”

So he and nine other people who are featured in the 21-minute video called “Negative Impacts of the Northern Pass Transmission Line” will journey south for Friday’s adjudicative hearing on Northern Pass’ application before the Site Evaluation Committee subcommittee hearing the case.

They don’t really have a choice. 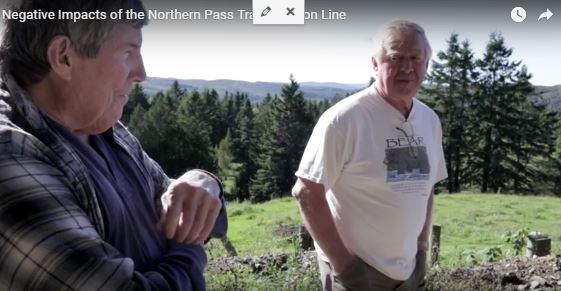 John Harrigan, left, and Brad Thompson, are pictured in a screen shot from Tim Shellmer’s video.

Northern Pass attorneys opposed showing the video at the adjudicative hearings, but subcommittee chairman Martin Honigberg issued an order earlier this week clarifying a prior ruling.

“The Applicant acknowledges that its motion to strike the video was denied, but argues that the video should not be shown during the adjudicative hearings,” Honigberg wrote. “The Applicant argues that, similar to pre-filed testimony, to promote timely and orderly conduct of these proceedings, the Subcommittee should independently review the video and limit the Intervenors’ testimony during adjudicatory hearings to cross-examination.”

There have been more than 45 adjudicative hearings on Northern Pass’ application so far and more are scheduled through the end of the year.

The video will be presented to the subcommittee in public in the hearing room at 49 Donovan St. immediately prior to the cross-examination of the Intervenors that participated in the video, he added.

The video was submitted by Brad Thompson, who commissioned the video by Tim Shellmer, for intervenors from Pittsburg, Clarksville, and Stewartstown, and Group I North.

“The purpose of making this video:  we felt a need to educate the Site Evaluation Committee on the natural beauty of the North Country—where there presently are no transmission lines/no right of way for Eversource—and the negative effect on tourism that the Northern Pass project will clearly have on the North Country towns of Pittsburg, Clarksville and Stewartstown,” Thompson said.

Outdoor writer John Harrigan, who is featured in the video, said he hopes the public and media attend Friday’s hearing. He wants the subcommittee members to see parts of the proposed transmission line they wouldn’t have been able to see during a bus tour.

“This is such a strange story,” Harrigan said. “We argued it should be shown because the Site Evaluation Committee has not been able to visit some of the more pristine areas that they really should see.”

Tim Shellmer used a drone to shoot vast areas of the North Country during fall foliage last year where the line would be built to bring electricity from Hydro-Quebec to southern New England. He videotaped interviews with the 10 people who are now called to testify Friday.

John Amey, 67, also has to milk cows twice a day, but he and his wife Cindy-Lou will both be at Friday’s hearing because they were both in the video.

Amey said it’s going to be an expensive day because they will have to hire someone to do the morning milking.

“We can’t enjoy the frivolity in Concord because we have to be home by 5:30 to milk the cows. There are 100 animals here and we have lots to do to prepare for winter,” Amey said.

Everybody in the video has to be at Friday’s hearing for it to be a valid event, he said. “There’s a lot of pressure on the group, but we all have to be there or that evidence (the video) will be thrown out,” Amey said.

Thompson said: “Most everyone has the long drive from Pittsburg, Clarksville, Stewartstown or Colebrook.”

Northern Pass lawyers requested that all the participants be present when the video is shown, as this is considered testimony, and they needed to be available for cross-examination by both sides, Thompson said.

“It’s now obvious that the applicant feels very threatened by this video, as they have tried twice —unsuccessfully—to strike it from being shown,” Thompson said.

It’s a compelling story, said Thomson, who along with his wife, Daryl, are regulars at the hearings.

“We feel these people will have an impact.  The folks in this video are the heart of the North Country and exemplify why this project cannot be built,” Thompson said.

“They are the reason we have been fighting so hard for the past seven years.  We are proud to be their voice.”