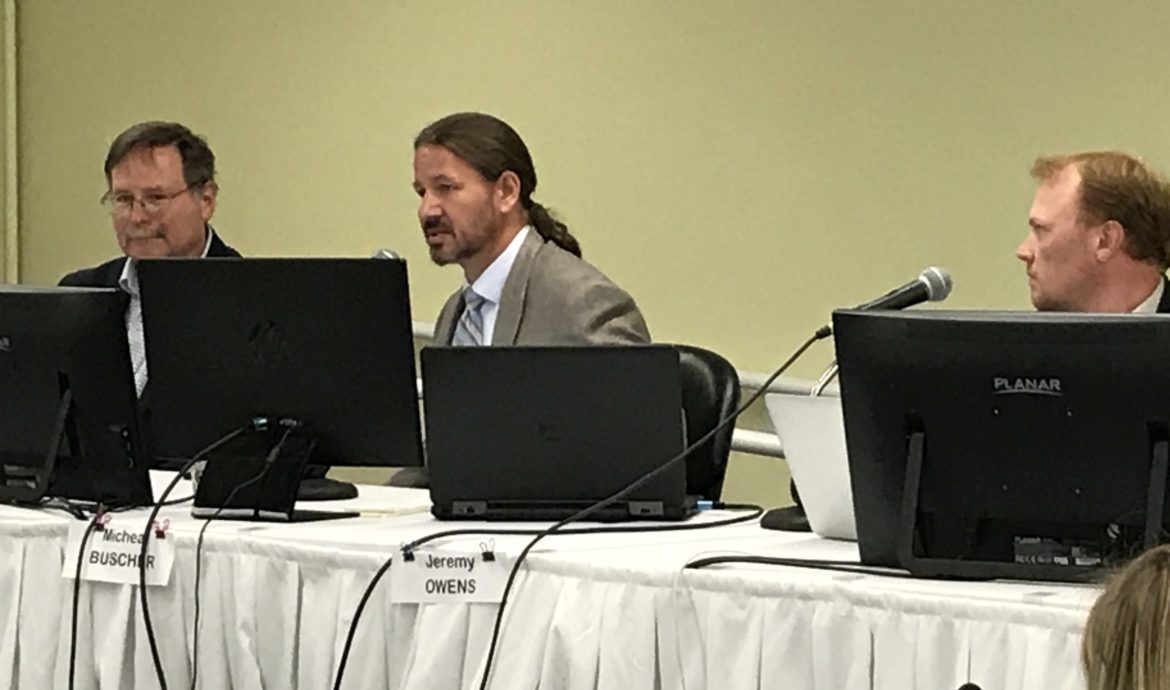 CONCORD — Not enough has been proposed to reduce or eliminate the scenic impacts of the Northern Pass Transmission project, a consultant told the Site Evaluation Committee Monday.

Michael Buscher, president of T.J. Boyle Associates of Burlington, Vt., hired by the Counsel for the Public to review a report done for project developer Eversource on the scenic impacts, said one of the main reasons his company found the project would have unreasonable adverse impacts on scenic resources was the lack of mitigation.

One of the easiest ways to block views of power lines is vegetation and there is little use of that along the project route, or reconfiguring and consolidating new and existing lines on fewer towers, or lowering the height, or changing locations or using less visible material for the towers and wires, he said.

“Reasonable mitigation we would expect to be part of this project was not being followed so the project has unreasonable impact,” Buscher said. “We believe other things could be done.”

Hired by Eversouce, Terrence J. DeWan and Associates of Yarmouth, Maine, found the project would have little to no impact on scenic resources in the state although the firm did find some specific sites would be unreasonably harmed.

Buscher and his associates said the Maine firm did not consider public roads or small water bodies to be scenic resources although the greatest impact will be to people driving on public roads. DeWan considered scenic byways in its analysis, but not other roads.

“It’s the one location where the public has the greatest exposure to the project,” Buscher said. “To have that as a scenic resource is critical.”

Eversource lead attorney Barry Needleman questioned if Buscher had gone beyond SEC rules to include railroad bridges or roads in general. The scenic resource is what needs to be considered, not the view from the resource, he said.

But Buscher said his company used some discretion. When looking at resources impacted along scenic byways, the issue is the view not the asphalt, he noted.

Needleman said one scenic byway considered by DeWan was the Moose Path Scenic Byway which is 98 miles long through the far northern section of the state.

He said the project is only intermittently visible for a mile to a mile-and-a-half along the route. A driver going 50 miles an hour would only see the transmission line for a minute to a minute-and-a-half.

But James Palmer of T.J. Boyle said duration would change for someone biking or walking along the roadway. Duration is not the only consideration, he noted.

He said in every instance the project’s impact on the scenic resources is minimal compared with their overall use.

Bear Brook is the largest state park in New Hampshire with 10,000 acres and 40 miles of trails, he said, with more than 90 structures visible when the leaves are off the trees.

In most of the park, the project is not visible, he said.

Buscher said the overlooks are “celebrated situations” within the park which makes them more important.

Whether or not the scenic view from the Mountain View Grand Hotel should be considered a scenic resource was debated extensively Monday.

DeWan included pictures and simulations along the road to the hotel as well as from the hotel’s porch and found little visual impact from the project.

Buscher said his firm reviewed that information and from other locations at the hotels like rooms and the spa tower to take a more general look at the overall impact.

Is there public access to the rooms and spa tower, Needleman asked.

Buscher said the public can rent rooms and anyone can go up on the front porch.

Committee member Christopher Way, representing the Department of Business and Economic Affairs, noted the hotel could be seen as private property you have to pay a fee to enter, but Palmer said a person also has to pay a fee to use a state park, which is considered a scenic resource.

“Paying a fee to go into a state park is fairly different than the ability to go to a grand hotel,” Way said.

“It’s not the fee per se but how much the fee is?” questioned Palmer. “The money part is a difficult criteria to define public access.”

Another committee member William Oldenberg, representing the Department of Transportation, asked how many unreasonable impacts would it take to not build the project.

“It could be one,” Buscher said, “One single unreasonable effect could be so adverse as to stop the project.”

Craig Wright, representing the Department of Environmental Services, asked could the impact not be considered significant and still prevent the project from going forward.

“That would be highly unlikely,” Buscher said. “But that is all speculation.”

Eversource had hoped to have all federal and state permits by the end of this year with construction to begin next year and the transmission line finished by the end of 2020. The Site Evaluation Committee is not expected to make a final decision on the 192-mile, high-voltage, $1.6 billion transmission line to bring Hydro-Quebec power to New England until the end of February.

If it receives all of its permits, project officials said last month, construction could begin in April.

Anti-Northern Pass Video To Be Shown At SEC Hearing; Featured Foes Must Testify