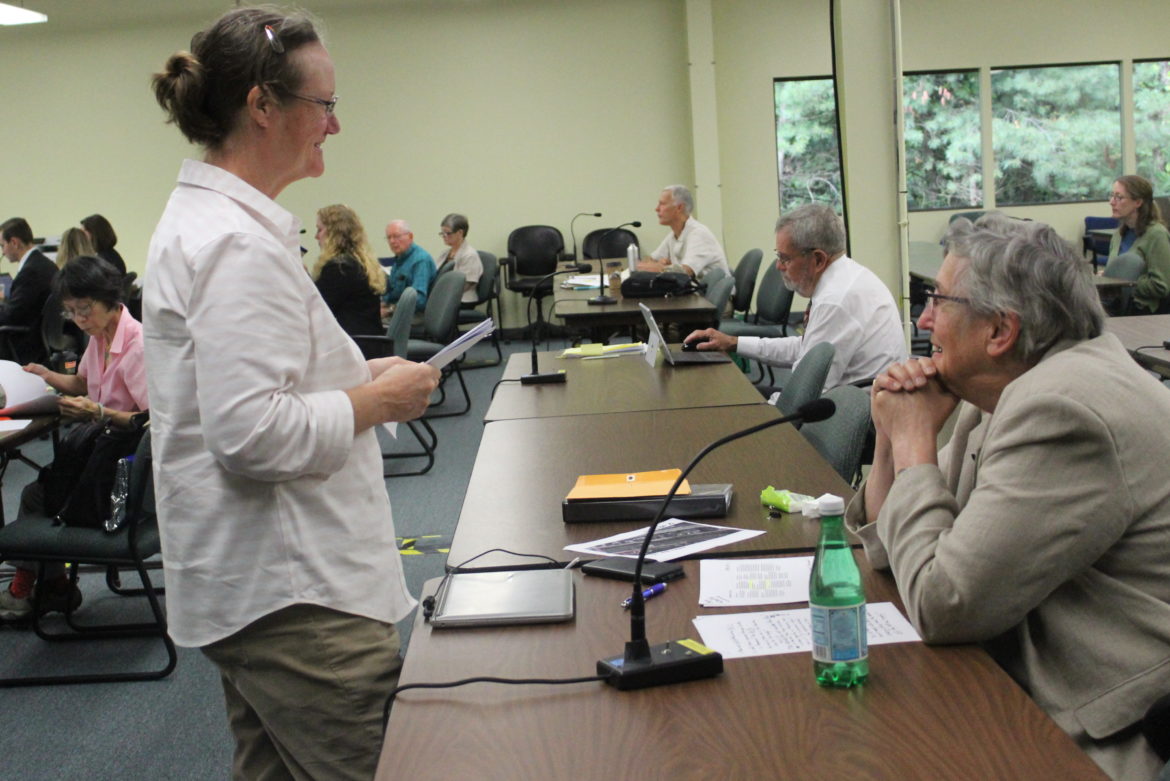 CONCORD — Northern Pass’s expert on the visual impact of the proposed 192-mile, high-voltage transmission line says he still doesn’t know which side of the road 52 miles of the project would be buried from Bethlehem to Bridgewater.

Terrence J. DeWan testified Friday that when he did his visual assessment two years ago, he believed the buried portion would be under the roadway.

But that has changed, according to Grafton County Attorney Lara Saffo, representing the Grafton County Commissioners, who are intervenors in the case. Saffo said that option is off the table, although the applicant is still seeking exceptions. All but 60 miles of the line from Pittsburg to Deerfield would be overhead lines.

Saffo: “Do you know which side of the road (line burial) is going to be on?”

DeWan: “Based on conversations with design engineers, that’s a decision that’s not been made yet.”

Saffo asked DeWan if he knew that it would take space beside a road for the equipment needed to bury the line. Wouldn’t that require clear cutting trees and stone walls to make room for the equipment? she asked.

Saffo: “How do you do an aesthetical impact assessment if you don’t even know what side of the road it’s going to be on, never mind how far into the road you’re going?”

DeWan: “Based on the information that’s been provided to us….”

Saffo (interrupted): “Which is that they don’t know what side of the road it’s going to be on yet.”

DeWan: “As far as I know, the final engineering has not been done.”

All of the adjudicative hearings that started in April have focused on Northern Pass/Eversource experts laying out their case in favor of the $1.6 billion project to bring Hydro-Quebec electricity through New Hampshire to southern New England.

Their experts have been cross-examined by intervenors that include citizens whose property will be impacted, businesses, the appointed lawyers representing the public, and organizations such as the Society for the Protection of New Hampshire Forests.

On Friday, Martin Honigberg, chairman of the Site Evaluation Committee subcommittee that will decide whether to approve Northern Pass’ application, made it clear there will be little patience for any duplication of questioning, even by non-lawyer intervenors going forward.

Honigberg pressed several intervenors to get to the point of their questions faster and scolded one woman, Charlotte Crane, near the end of the day Friday for taking too long.

Crane is the spokesperson for non-abutting property owners with overhead lines proposed from Ashland to Deerfield. It took her more than four hours to finish questioning, Honigberg told her, much longer than planned.

“This is unacceptable,” Honigberg said before ending with “Miss Crane, please return to your seat.”

It wasn’t the only time Honigberg appeared exasperated by the pace of questioning on Friday. The subcommittee has had to put off its decision for five months – to Feb. 28, 2018, and added 31 more hearing days from October through the end of December because the hearings are taking more time than planned.

Gretchen Draper of New Hampton and Max Stamp of Bristol both attend most of the hearings representing the Pemigewasset River Local Advisory Committee, intervenors opposed to Northern Pass.

“Is there anything you want to do that is different from what Mrs. Draper did?” Honigberg asked.

Stamp finished his question. Honigberg said he was speaking to all of the groups. “We’ve gotten a little lax in requiring groups to specify what areas they want to cover, but that laxity is done,” Honigberg said.

“We lapse into covering the same topics with different people from the same groups and it’s not going to happen. It’s inefficient and we don’t have the time or the luxury.”

During a break, Stamp conceded it is probably fair to try and tighten up the questioning, but Draper said she didn’t like it.

“I really feel pretty outraged by the idea that people representing the public like us have to jump through other hoops – maybe cut down, maybe not be able to speak our piece,” Draper said.

Most people don’t feel comfortable coming to the adjudicative hearings in Concord, she said.

“I have been spending all this time listening to the spin of Northern Pass experts with so many people wasting our time because they basically didn’t know New Hampshire,” Draper said.

Honigberg ordered each intervenor to produce a list of each witness or witness panel that they intend to cross-examine and include layers of information by Sept. 22.

“This order creates an enormous and onerous burden on each intervenor…,” Menard wrote. Thirteen intervenors concurred with her motion, she said.

The committee will determine whether an intervenor’s cross-examination would be necessary to obtain “a full and true disclosure of facts.”

Northern Pass spokesman Martin Murray said in an email that he expects the applicant will file an objection to the Menard’s motion and they have 10 days from the date of the motion to do so. Menard’s motion was filed Thursday.

Menard said intervenors must also fully participate in hearings before the Site Evaluation Committee, review and determine every fact and position the intervenor intends to present, and review prefiled testimony and other information relating to every remaining witness.

Her motion goes on to say intervenors must also determine whether every “position” in their testimony is consistent with their own and if it is adverse to their own, identify and state all of the reasons.

“(Honigberg’s) order on friendly cross-examination is unfair, unreasonable and unjust. And it undermines due process for the intervenors,” Menard said.

It would also give an unfair advantage to Northern Pass with its “stable of lawyers,” Menard said.

“Adaptability, flexibility, and surprise are the very core of cross-examination,” Menard wrote, but Honigberg’s order forces intervenors to provide an exact roadmap of their case.

Intervenors are not delaying the process, she said.

“They are earnestly and legitimately engaged in the review of an unprecedented, complex project that spans 192 miles and involves multiple forms of construction in a varied landscape,” Menard said.

She proposed that Honigberg modify his decision and order the parties to reassess and resubmit any change in their time requests every two weeks going forward.

“This would allow parties to reduce the time needed based on cross-examination questions that have been asked. It also provides (Honigberg) with a more accurate view of the timing of the proceeding,” Menard wrote.