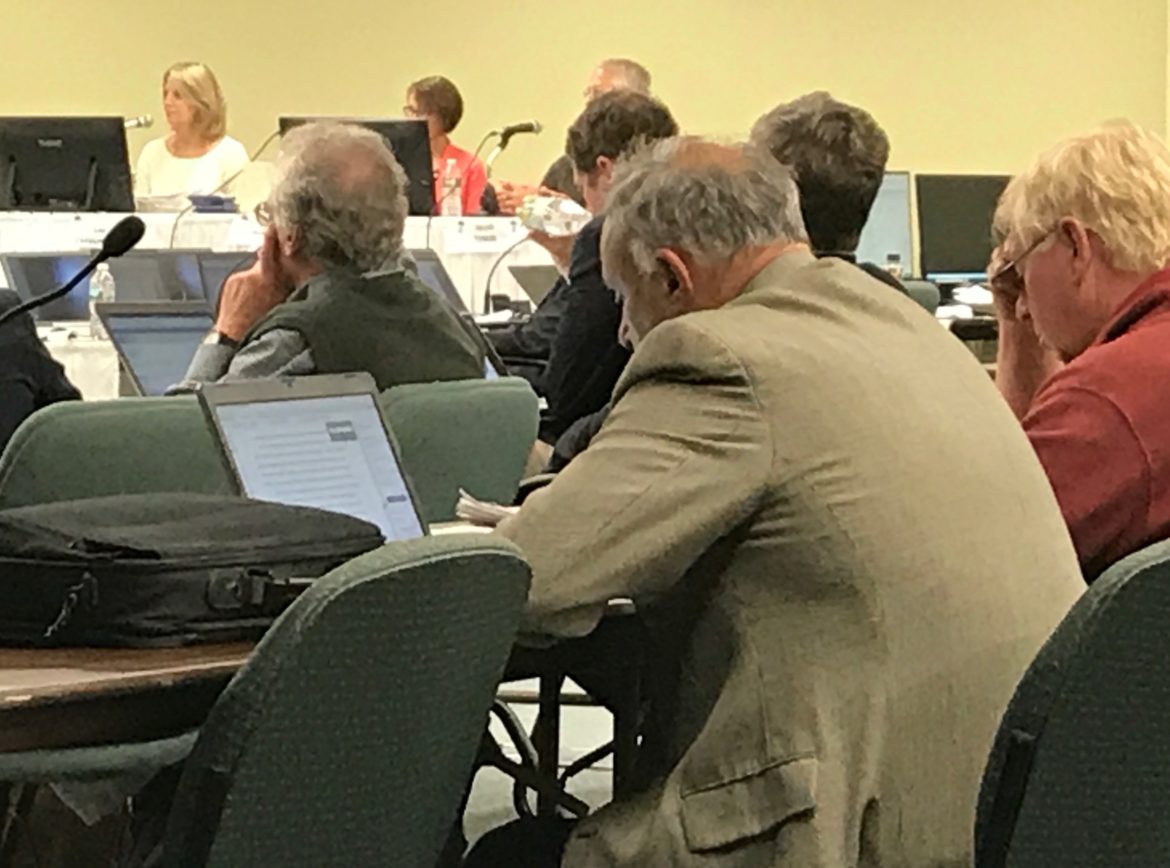 CONCORD — Several members of the Site Evaluation Committee questioned whether more could be done to minimize harm to wetlands by the Northern Pass Transmission project.

Committee member William Oldenburg, Department of Transportation assistant director of project development, showed one section of the planned transmission line in Dixville and suggested the proposed access road could be relocated to avoid two wetlands and minimize the effect on another.

But Lee Carbonneau, assistant project director for Normandeau Associates, hired by Eversource, said for construction, the access road needs to be as straight as possible to avoid structures, noting steep slopes are also problematic for equipment.

“It is a balancing act between making sure not to eliminate what turns out to be the best access for the contractors and minimizing their options,” she said.

Carbonneau said some minor changes may be made in the field, but if they are significant, the Department of Environmental Services would have to review the effect on wetlands.

Oldenburg noted the underground section of the line is being redesigned to ensure the line and slice vaults are not under the roadway. Yet, he said many sections have wetlands in the right of way or adjacent to it.

“I’m guessing there is a lot more temporary and even permanent impact to wetlands,” Oldenburg said, “if these lines are buried off the road.”

Environmental project manager Jake Tinus from Burns and McDonnell Engineering, said about 50 percent of the 60 miles of buried line have been examined and only one wetland will be temporarily impacted by construction.

“We are committed to study the remainder of (the buried line) and will report our findings,” said project spokesman Martin Murray, adding there is a provision to ask for an exemption to move the line under the roadway, and that may happen to avoid the potential impact on the wetland.

With the potential for more wetlands impacts, Oldenburg questioned whether the project’s mitigation plan is sufficient.

Carbonneau said the mitigation plan includes more than what is needed. She said that allows some flexibility during construction.

She said if the impact is greater than 20 percent than what is permitted, the Department of Environmental Services requires the developer to resubmit its application and start over again.

The SEC members questioned the panel extensively about the environmental monitors who are expected to ensure protocols, best management practices, and restrictions are followed.

According to the developers, there are four main areas of construction and each will have a supervisor with field monitors who answer to them.

Carbonneau said there would be a greater need for people to monitor such things as erosion, sediment control, wetlands impact and water quality, but less need for wildlife and botany specialists who would travel from site to site as needed.

There would be two teams of monitors – one hired by Eversource and another team hired by contractors.

The monitors are credentialed, Tunis said, and they have to follow certain ethical standards, but “the teeth is with the DES.”

Following the requirements and restrictions is easier than taking short cuts, said Carbonneau. If an egregious event occurs, construction can be shut down until the problem is fixed, she said, and that would have a greater impact on construction and the project’s schedule.

Deputy Director of the Department of Resources and Economic Development Christopher Way asked what assurances there are that the environmental requirements will be followed.

On projects she has monitored, Carbonneau said, if the project manager empowers the monitor before the workers that they have the power to stop work, “that solves almost every problem.”

Way asked if there were 30 or so people in the state who have the skills to be environmental monitors.

Tinus said there are a couple hundred individuals who are properly credentialed to do the work in the state.

The Site Evaluation Committee will not meet again until July 18. The committee must decide by Sept. 30 whether to approve or deny the application submitted by Northern Pass Transmission/Eversource Energy.