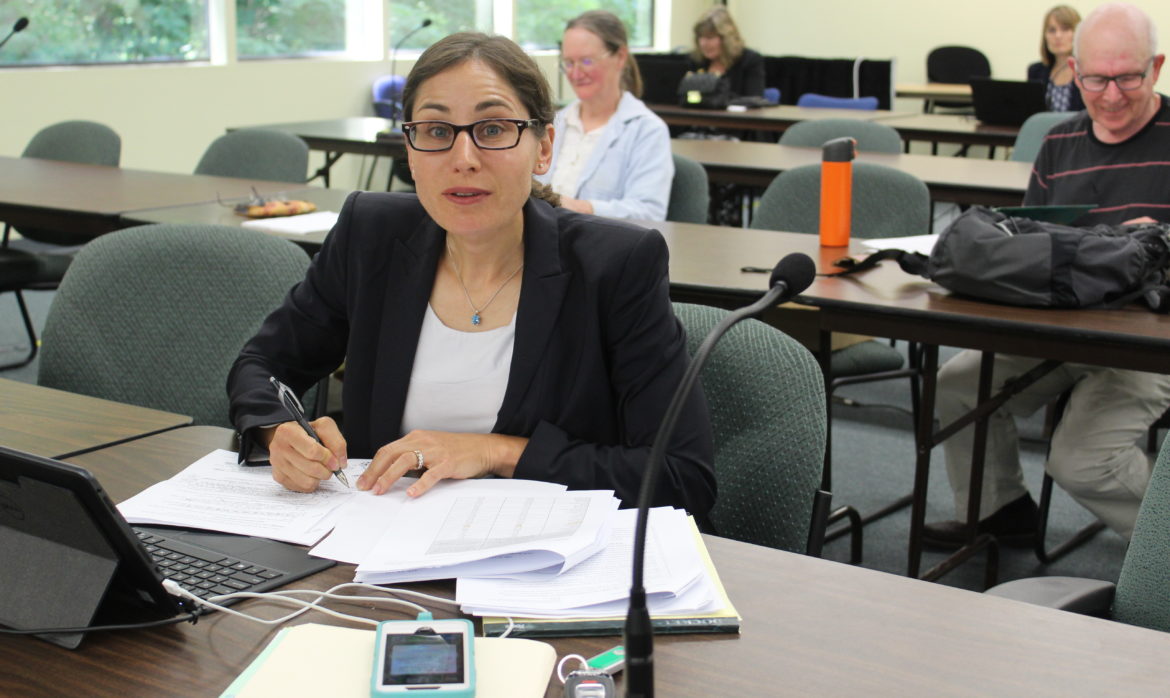 Concord and Bridgewater property owners would see the least relief from Northern Pass tax payments to the 31 host communities if the proposed 192-mile transmission line is built from Pittsburg to Deerfield, according to testimony at Friday’s adjudicative hearing.

Under cross-examination from Concord’s Deputy City Solicitor Danielle Pacik, Northern Pass tax expert Dr. Lisa Shapiro conceded that Concord residents who own a home assessed at $100,000 would see a $20 reduction in their tax bill in the first year of operation. Bridgewater residents with the same assessment would see a $17 reduction.

“Is fair to say all other things being equal the $20 or $10 will be reduced over time?” Pacik asked.

Shapiro conceded after some discussion that that was likely.

Some municipalities see much higher potential reductions than Concord because of the amount of taxable property in Concord, Pacik said.

Deerfield homeowners with a $100,000 assessment would fare much better with a $370 reduction in their tax bill; Woodstock $400; Franklin $750 and $830 in Stewartstown, according to Shapiro’s supplemental testimony.

Pacik also questioned Shapiro about the selection of commercial property to mitigate interfering with the Karner Blue butterfly habitat.

Pacik asked Shapiro if the property would have earned more tax dollars over time if it was developed for business purposes instead of remaining unbuildable forever.

Shapiro said that was not necessarily true if for instance it was developed for gambling purposes and required more city resources by way of police protection.

Shapiro responded to detailed questions Friday at the Site Evaluation Committee adjudicative hearing about the taxes the $1.6 billion project plans to pay to the host communities if it wins state and federal approval.

Shapiro is the chief economist at Gallagher, Callahan & Gartrell in Concord. She was hired by Northern Pass to provide information on the estimated property tax payments to New Hampshire’s host communities.

According to Northern Pass, infrastructure associated with the project to import electricity from Hydro-Quebec would increase the local tax base across 31 host communities by about $1.5 billion.

Using the estimated Northern Pass net book value as fair market value for tax purposes, the project would pay an estimated $564 million to $692 million in total New Hampshire property taxes over the first 20 years of operation, according a project fact sheet.

“And that amount of money hasn’t swayed your opinion one way or another?” Whitley asked.

Whitley questioned her about the fear some communities have that any tax benefit would be offset by the cost of fighting Northern Pass if it disagreed with their property assessments.

Northern Pass volunteered to take a pledge that it wouldn’t do so as long as the municipalities used the method the project approved of to assess them.

“Would it surprise you that some people saw that as a threat?” Whitley asked.

Shapiro said that she was surprised by that and it was not the intent.

Since 2009, Eversource has filed 260 separate tax year abatement appeals, Whitley said. Shapiro said she wasn’t aware there was that number.

Some host communities have been involved with tax disputes with Eversource, Whitley said, and Northern Pass didn’t contact them to find common ground on an assessing method.

He went on to say that Deerfield paid $22,000 on legal expenses for such a fight and $30,000 to an appraiser. Defending abatement cases reduces any net benefit from tax payments, he said.

The Site Evaluation Committee wrapped up its questioning of Northern Pass environmental expert Bob Varney on Friday asking if he “believes in climate warming” and whether people help cause it.

Varney answered yes to both questions.

Next week, there will be a brief lull in the adjudicative hearings, but two extra days of bus tours will be held for committee members at Counsel for the Public Peter Roth’s request along the northern portion of the proposed route.

The adjudicative hearings will resume on Monday, July 31 with Jim Chalmers testifying about whether the project will impact property values and through Thursday of that week, then on to historical resources, then a break until Aug. 29.

The Site Evaluation Committee is scheduled to make its decision whether to approve Northern Pass/Eversource Energy’s application by Sept. 30.

Pessamit Innu, Lawmakers, Citizens, Businesses All Have Their Say on Northern Pass