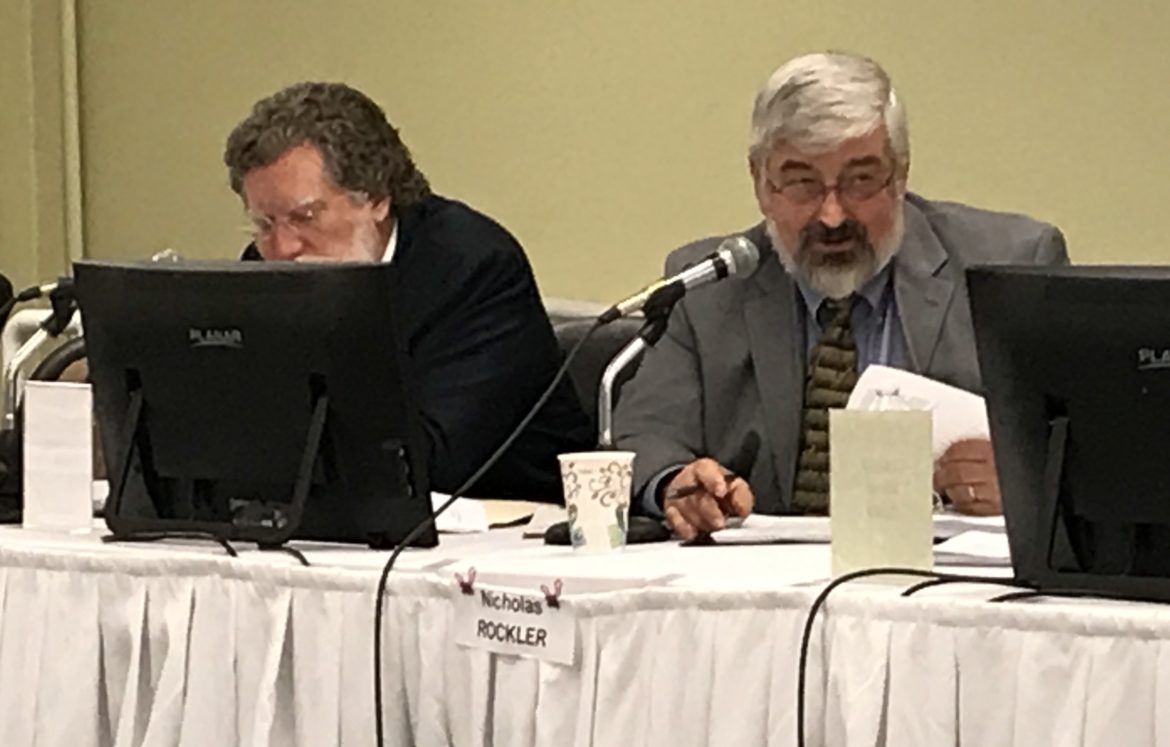 Dr. Nicolas Rockler, on the right, and Thomas Kavet of Kavet, Rockler & Associates, LLC of Williamstown, Vt. testify at adjudicative hearings before the Site Evaluation Committee Friday on the economic benefits of the Northern Pass Transmission project. The company was hired by the Counsel for the Public to review information provided by project developer Eversource.

CONCORD — The second half of the regulatory war over the Northern Pass Transmission project began in confusion Friday as the opposition opened its case before the Site Evaluation Committee in the months-long proceedings.

Eversource’s final witness Les Otten, who is redeveloping the Balsams Resort, was grilled about the timing of the project’s economic development fund’s $5 million loan and his support of the transmission line. Then the hearing quickly ground to a halt.

Under questioning by Tom Pappas, representing Counsel for the Public, Otten testified that his company has received about $25 million in deposits for future residences at the $143 million Balsams project.

Otten acknowledged that he received an “investment loan” from Northern Pass’s Forward NH Fund of up to $5 million in February 2016 that he called “extraordinarily important to the Balsams redevelopment. It’s a very depressed area of the state and (the loan) is a big help to get redevelopment moving.”

Pappas asked if there was any documentation to follow or agreements the Balsams had to do in order to receive the loan.

Otten said he did agree to provide testimony in support of the project and supplemental testimony and to testify before the committee.

“So as part of receiving funding NPT or Forward NH you are required to testify,” Pappas asked, and Otten agreed.

Attorney Jason Reimers, representing the Society for the Protection of New Hampshire Forests, pressed Otten on when he went public with his support for the Northern Pass project.

Prior to the loan, had Otten publicly supported the project? Reimers asked.

“I don’t have a recollection,” Otten said. “I spoke when asked about Northern Pass and I talked to the (North Country) Chamber of Commerce prior to that date.”

Reimers asked when that was and Otten said it was a couple of months before the loan.

Otten said he had discussed the project with former Eversource President Gary Long in 2014 and knew about the Forward NH Fund in late 2015.

During Pappas’s questioning, Otten acknowledged that he did not have to provide financial information or other documentation to receive the loan, nor is there a re-payment schedule, but he did say the money does have to be repaid.

After Otten finished testifying, Committee chair Martin Honigberg sought to set the ground rules to prevent a process that could move the hearings past the December deadline. The hearings have already had to be extended for another three months.

“All those adverse to the applicant’s witnesses are not all the same, but are all on the same side trying to do the same thing. We cannot have multiple people doing the same thing,” Honigberg said. “I am very concerned if people continue to do what they have been doing for this part of case.”

The issue of friendly cross-examinations has been raised several times by Eversource and last month Honigberg issued an order requiring intervenors to report which witnesses they intend to question and on what issues.

Intervenors had said they would need 235 hours to cross-examine “friendly witnesses,” which would require an additional 39 days of hearings. The SEC added 31 more days of adjudicative hearings during October, November and December.

Attorney Steven Whitley was questioning Dr. Nicolas Rockler and Thomas Kavet of Kavet, Rockler & Associates, LLC of Williamstown, Vt., when Honigberg said, “I have not heard anything that sounds like cross-examination that would help the committee.” That launched a half hour discussion of what would and would not be acceptable going forward.

Honigberg said he did not want interveners rehashing pre-filed testimony by the witnesses, enhancing their resumes or seeking opinions of witnesses to testimony about the applicant’s witnesses’ earlier testimony.

Northern Pass attorney Barry Needleman said, “We are the party with the burden of proof and we should have the last word. If other witnesses come on and rebut testimony, I’m not sure that is fair.”

“We should not be rebutting the rebuttal,” he said.

But several intervenors said they have tried to coordinate so there would not be overlapping questioning on the same topic.

Attorney Pappas noted that the recent re-appearance by Eversource’s construction panel produced a lot of new information that rebuttal witnesses had not considered in their pre-filed testimony.

Honigberg said going forward those issues would be determined question by question and issue by issue, but he did not want to see intervenors expanding what has already been filed unless there are changes that need to be made.

The $1.6 billion, 192-mile, 1,090 megawatt project to bring Hydro-Quebec electricity to New England was first proposed seven years ago. The SEC recently delayed making its final decision for five month pushing its deadline until the end of February, 2018.