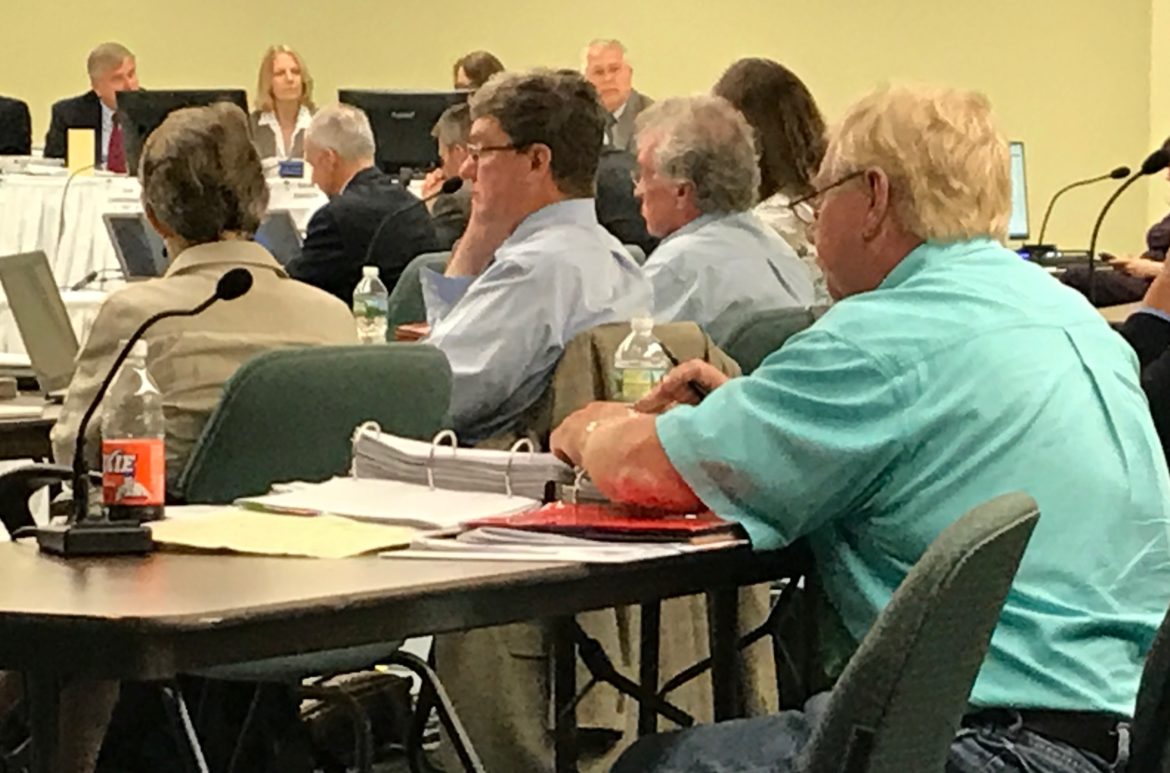 CONCORD — Intervenors in the Northern Pass Transmission project to bring Hydro-Quebec electricity to New England, questioned environmental scientists hired by Eversource about the thoroughness of their review.

Attorneys claimed the scientists failed to identify all the wetlands impacted by the project and questioned if restoration efforts would allow the areas to function as they did before construction of the $1.6 billion, 1,090 megawatt, 192-mile transmission line between the Canadian border and Deerfield.

The adjudicative hearings before the state Site Evaluation Committee are expected to continue into September before regulators determine if the project moves forward.

At Tuesday’s hearing, attorney Amy Manzelli, representing the Society for the Protection of New Hampshire Forests, questioned if the disturbed wetlands would be restored to pre-construction conditions.

Lee Carbonneau, assistant project manager for Normandeau Associates, said where there will be temporary impacts to wetlands, the area would be regraded to match the original condition and seeded to reestablish vegetation native to the wetland to “set the stage of restoration of all functions and values.”

She said a mitigation plan preserving more than 1,600 acres has been developed to address permanently damaged wetlands.

But Manzelli noted there are no site specific plans to address wetlands damaged temporarily by construction, and Carbonneau said that is true but an overall plan has been developed and environmental monitors on the sties would determine exactly what would be needed to restore the areas.

Manzelli said the Department of Environmental Services will sign off on the restoration of a site if 75 percent of the vegetation has been reestablished in two years.

“That 25 percent may never be reestablished,” she noted, and no one would know unless the area is monitored.

But Carbonneau said the company is required to monitor the site the third year after construction and has to provide periodic monitoring reports.

Until DES approves the restoration effort, she said, work would continue to restore the wetlands. “The DES has the final word,” Carbonneau said.

Manzelli noted there are 1,400 restoration sites that will need to be monitored but the precise location, vegetative mapping or photos have not been catalogued.

Carbonneau said enough information has been provided to the DES to adequately restore the wetlands and meet all federal and state standards.

Another attorney claimed the company failed to delineate thousands of square feet of wetlands along the transmission line’s right-of-way through Concord.

Deputy City Solicitor Danielle Pacik said the city of Concord hired a respected wetlands scientist who found 40 areas Normandeau Associates missed or that will suffer permanent instead of temporary damage due to the construction.

She said Dr. Rick Van De Poll said Normandeau failed to identify 65,947 square feet of wetlands that will be temporarily damaged by construction and 720 square feet that will have permanent impacts.

Pacik said one area is a vernal pool that he recently visited again after he identified the areas in the winter months.

Carbonneau said Van De Poll did his field check in winter and not during the time of year to assess vernal pools. She noted the Army Crops of Engineers checked their work and two scientists can disagree about the exact delineation of an area.

Pacik said if the area is a vernal pool, the sensitive area should be avoided during construction.

There is no reason to revise their maps, Carbonneau said, adding the pool would be dry by summer and no transmission line structures are proposed within the area.

“You have no plans to go back out and check the area?” Pacik asked, and Carbonneau said they did not, but would go into the field to reflag the wetlands boundaries before construction begins.

“There is no question in my mind that we have done an adequate delineation job on this project and that has been affirmed by the Army Corps of Engineers,” Carbonneau said.

By granting the licenses, the PUC found the crossings will not interfere with the public’s use of the land and waters.

The adjudicative hearings on the project proposed by Eversource will continue Friday beginning at 9 a.m. with the environmental panel. Site Evaluation Committee members are expected to question the panel Friday.

On Thursday, the second of four public comment hearings will be held between 9 a.m and noon with about 40 people expected to address the committee.