Northern Pass was found to have an adverse visual impact on the Weeks Estate and State Park in Lancaster, but not enough to remove it from the National Register of Historic Places.

CONCORD — Counsel for the Public Peter Roth questioned how Eversource preservation experts pared over 1,284 historic and culturally significant properties impacted by Northern Pass transmission lines down to six at Thursday’s adjudicative hearing on the project.

Project developer Everource said the experts’ assessments will be used to help avoid and minimize impacts to historic resources.

A preservation expert retained by Roth suggests the list should have been larger as did initial work by the state Division of Historical Resources in reviewing the Northern Pass application. 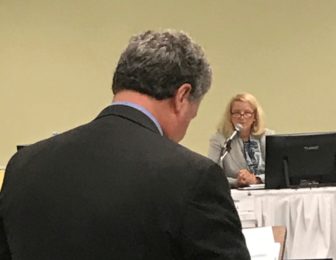 But Cherilyn Widell of Widell Preservaton Services of Chestertown, Maryland, who oversaw the work for Northern Pass, said her work along with Preservation Company of Kensington produced a broader net.

What method was used to pare the list,  Roth asked Widell.

She said the first step is to identify all the potential properties in the “Area of Potential Effect” along the line’s route from Pittsburg to Deerfield, which was 1,284.

Then a computer program determined if the transmission line could be seen from the properties. Another criterion is that the structures have to be at least 50 years old.

That reduced the number to 194, Widell said, and those properties were visited and their future impact analyzed.

Roth asked if properties were eliminated from consideration simply because there was no view of the transmission line, and initially Widell said other criteria were involved but after repeated questions acknowledged some were eliminated on that criterion alone, but could not say how many.

After the 194 properties were analyzed further, the number of properties with adverse impacts was 12, but has since been reduced to six although some of the 12 are now included in rural large historic and agricultural districts.

Roth said the process Widell and Preservation Company used should have first determined if the property was historically or culturally significant and retains its “integrity” before the visual impact is considered, but Widell disagreed saying they did the research to determine whether properties were eligible for the National Register of Historic Places.

Roth cited a Dec. 2, 2015, letter from the Division of Historical Resources saying the paring of properties  was done more through “visual assessment and consultants’ judgement than an understanding of significance.”

Widell said Preservation Company has been doing historical inventories in the state for more than 30 years in many communities affected by the proposed power lines.

She said work with project engineers to change locations and types of poles have reduced many of the adverse impacts initially noted.

But Roth questioned if the adverse impacts have truly been avoided or minimized if larger structures will be installed closer to the edge of the right-of-way.

Widell said the plan uses 90 miles of a decades old corridor, much of it through forests on low-lying lands which helps to minimize visual impacts.

Roth noted Widell testified burying 60 miles of the project will help minimize the adverse effects, but the work to bury the line underground could impact historical properties.

“Are you saying having a big (slice vault) box buried in the front yard of a historical property will not have an effect,” Roth asked. Widell said it could.

Roth also noted the project will have an adverse impact on a number of historical and cultural districts such as North Road in Lancaster and Northside Road in Stark that could make them ineligible for the National Register.

A status hearing on the 1,090 megawatt transmission project to bring Hydro-Quebec electricity to New England will be held Wednesday. Adjudicative hearings will resume Aug. 29.