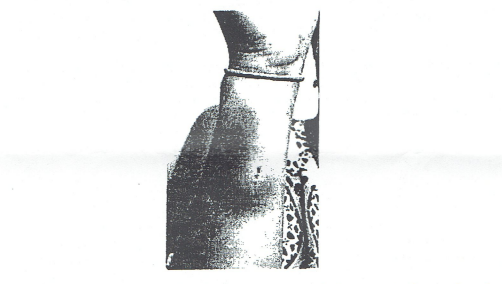 Screen shot of photo in the unsealed affidavit.

Photo of alleged bite mark on Emily Stone Jacobs' arm on June 13, according to unsealed affidavit.

Newly unsealed documents say Sen. Jeff Woodburn admitted in his journal that he kicked the dryer and broke a door at Emily Stone Jacobs’ home, but allegations that he bit, hit and threw a plastic cup at her came from Jacobs and photos of the alleged bite mark bruises.

Woodburn, 53, a Whitefield Democrat, has pleaded not guilty to nine misdemeanor charges involving domestic violence against Jacobs, chairman of the Coos County Democratic Committee who is running for Coos County Treasurer.

Judge John Boyle’s order was made public Monday finding in favor of the Berlin Sun that Woodburn’s arrest warrant and affidavit in support of the warrant should be unsealed in the 1st Circuit District Division – Lancaster Court.

“… the Court finds that the State has not met its burden to demonstrate that there is a compelling interest to keep the Arrest Warrant and Supporting Affidavit, sealed,” Boyle wrote.

Details of the interview investigator Todd Flanagan of the attorney general’s office conducted with Jacobs on July 25 are contained in the affidavit. Jacobs’ name and some identifying information such as addresses were redacted, but Boyle noted that her name was already in the public domain as was much of the information in the affidavit.

Flanagan wrote: “The victim articulated an up-and-down relationship, in which she and Mr. Woodburn would often argue and would separate for periods of time. She described him as very controlling.”

Jacobs had possession of Woodburn’s diary/journal and told Flanagan about the entries Woodburn made admitting to breaking her door and dryer.

“She said she did not see any entries with respect to the assaults but she indicated that she has not reviewed the entire diary/journal,” Flanagan wrote.

While Jacobs was willing to turn over Woodburn’s journal, the state took custody of it only after obtaining a search warrant, the affidavit stated.

In a journal entry dated Aug. 12, 2017, “Woodburn stated that after an argument with the victim, in which she threw his clothes out onto the lawn, ‘I responded by kicking the door off the dryer, we have not communicated since that night, I feel bad about the whole thing.’”

Jacobs also told investigators that on Christmas Eve, she was wrapping Christmas presents when she and Woodburn got into an argument.

“The victim stated that during the argument Mr. Woodburn had struck her in the stomach with his hand. After she was struck, the victim said to him, ‘You just punched me in the stomach’ and he reportedly replied something to the effect of ‘oh did I hurt you…I’m sorry’ in a mocking manner,” Flanagan wrote.

The affidavit said Woodburn wrote about breaking Jacobs’ door after returning to her home on Dec. 24, 2017.

“He wrote that in leaving he had forgotten his wallet and stated ‘I banged on the door and she didn’t respond or let me in! I became enraged and kicked the door in busting up the framing around the door.’”

Woodburn then went to his home in Whitefield, according to the affidavit.

“A review of the diary/journal also revealed an entry on December 25, 2017, in which Mr. Woodburn stated, ‘Mind is sad and focused on my failure to control my anger.’ He added ‘I’ve had a few explosive moments with the victim)..it’s becoming regular and it scares me,’” Flanagan wrote.

“He added in the journal entry, ‘It’s so embarrassing-upsetting. It just keeps repeating itself in my brain…52 years old I need to grow up! I risk so much and hurt people who I should be loving,’” Flanagan wrote.

Jacobs met with Flanagan, Senior Assistant Attorney General Geoffrey W.R. Ward and Jacobs’ attorney Patricia LaFrance on July 25. Jacobs signed a proffer letter that day indicating she agreed to discuss allegations against Woodburn as long as her statements wouldn’t be used against her and she told the truth.

The “proffer” letter doesn’t say what crime Jacobs allegedly committed, but in Woodburn’s motion for discovery, his lawyer Donna Brown said Jacobs recorded Woodburn without his knowledge, which is a misdemeanor in New Hampshire. It also mentioned Woodburn’s journal that Jacobs said he left at her house.

Flanagan summarized his interview with Jacobs in the affidavit in which she detailed the allegations:

She and Woodburn argued in August 2017 and he threw a cup of water at her and the empty plastic cup. “She was not injured during this incident,” Flanagan wrote, adding that Woodburn was still upset and kicked the dryer door.

On Dec. 15, 2017, she and Woodburn were returning to her home from a Christmas party in Lancaster when he wanted to get out of the car. She pulled over and they argued.

“The victim said that Mr. Woodburn then proceeded to bite her left hand in the area of the palm and wrist as she reached for his phone,” Flanagan wrote. “She was able to get him to calm down and they continued home. The victim stated that she had difficulty using her left hand following the assault.”

Jacobs provided investigators with copies of photos of the bruise which were dated on her cell phone as having been taken on Dec. 19, 2017. “The photos depict fairly significant bruising to the left palm and wrist,” Flanagan wrote.

Jacobs provided photos taken on her cell phone June 10 and June 13 after another alleged incident, according to the affidavit.

“The photos did appear to be consistent with a bite mark, to include what appeared to be three small puncture wounds, possibly from teeth,” Flanagan wrote.

Jacobs gave written consent for investigators to conduct a forensic download of her cell phone, to include text messages, phone calls, photos and video stored on the phone, the affidavit states.

“A review of this information served to corroborate some of the details that the victim reported. For instance, photos depicting the bruising from the bite mark on or about June 9, 2018 were located on the phone,” Flanagan wrote.

The Woodburn affidavit and arrest warrant were unsealed and made public Monday after Berlin Sun managing editor Barbara Tetreault successfully argued that they should be unsealed.

Tetreault argued in a motion to unseal and at a closed-door hearing Sept. 21 in 1st Cir. District Division-Lancaster that court records are presumed public unless the party seeking nondisclosure demonstrates special circumstances to keep them closed.

Senior Assistant Attorney General Ward had asked the court to seal the records and argued they should remain so because the investigation was ongoing and could be compromised if made public.

Judge Boyle ruled in favor of the newspaper and took note of the fact that much of the information in the documents, including the alleged victim’s name, was already in the public domain.

“Notwithstanding this Order, and all of the information that is already in the public domain concerning this case, the Court recognizes the Constitutional principle that the Defendant is presumed innocent; that no allegations have been proven; that the Defendant has a right to a fair trial; and that trial should be held in a court of law and not in the ‘court of public opinion,’” Boyle wrote.

Woodburn’s trial has been scheduled for Dec. 17.

Sept. 12: UPDATE: Kelley Won’t Seek Recount in Race Against Sen. Woodburn After All