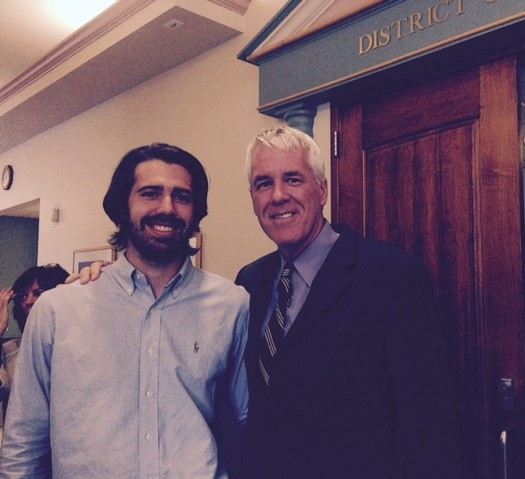 State Sen. Jeff Woodburn, right, is pictured with his son, John, at the 1st Circuit District Division -Lancaster on Monday.

LANCASTER – State Sen. Jeff Woodburn spent the afternoon before the primary in a locked courtroom Monday as the Berlin Sun argued records detailing domestic-violence allegations against him should be unsealed and the state argued they should remain confidential.

Judge John F. Boyle closed the hearing to the public, including the press and about a dozen family members and friends supporting Woodburn, 53. The Democrat from Whitefield previously pleaded not guilty to the nine misdemeanor charges against him.

Woodburn chatted with his attorney Donna Brown and supporters before the hearing, but declined public comment.

“I will be making a statement tomorrow after the election,” Woodburn said.

A bailiff locked the courtroom door in the 1st Circuit District Division – Lancaster after the parties entered. Boyle didn’t explain why the hearing was closed. He denied a last-minute motion filed by InDepthNH.org to be heard on the matter before closing the court.

“Today’s hearing pertains to the Berlin Sun newspaper’s motion to unseal court documents,” Boyle wrote denying the motion. “Pursuant to the Petition of Keene Sentinel 136 NH 121 (1992), this hearing is in chambers with only counsel for the parties and petitioner present.”

As a result of his arrest, Woodburn faces a write-in Democratic challenger in Tuesday’s primary, Kathleen Kelley. She lives in Randolph with her husband Mark, who runs the family business White Mountain Lumber Company. Kelley is well-known in the district because of the work she has done on numerous local boards. David Starr is running on the Republican ticket.

After the hearing Monday, the Berlin Sun’s managing editor Barbara Tetreault, said no new information came out during the brief proceedings. Boyle expected to make his ruling on her motion to unseal by November, she said.

Tetreault argued in her motion to unseal that court records are presumed public, citing the U. S. Constitution, the New Hampshire Constitution and state Supreme Court precedent. It is up to the party seeking non-disclosure to make the case for secrecy, Tetreault wrote.

Senior Assistant Attorney General Geoffrey W.R. Ward had responded to the Berlin Sun’s motion to unseal the affidavit and arrest warrant, arguing they should remain sealed to protect the integrity of the investigation, which he said is continuing.

Woodburn was charged Aug. 2 with biting the alleged victim’s arm and hand, hitting her in the stomach, throwing a cup of water in her face, then throwing the empty cup striking her in the face, breaking her dryer by kicking the door, kicking the locked door of her home and trespassing.

In a news release the attorney general’s office issued the day Woodburn was arrested, the state identified the woman only as Woodburn’s “intimate partner.”

InDepthNH.org independently identified her as his former fiancee, Emily Stone Jacobs, chairman of the Coos County Democratic Committee who is running for Coos County treasurer.

Tetreault had argued that the Supreme Court in the Keene Sentinel case wrote that there has to be some “overriding consideration or special consideration, that is, a sufficiently compelling interest, that would justify preventing public access.”

Ward’s objection argued: “Release of this information would undoubtedly compromise the ongoing investigation, because the affidavit in particular reveals the nature, scope and direction of the State’s investigation of this criminal case.”

The sealed documents reveal facts that are known to only a few individuals, and release prior to the completion of the investigation would present a situation where potential witnesses could modify their testimony or otherwise negatively impact the investigative process, Ward wrote.