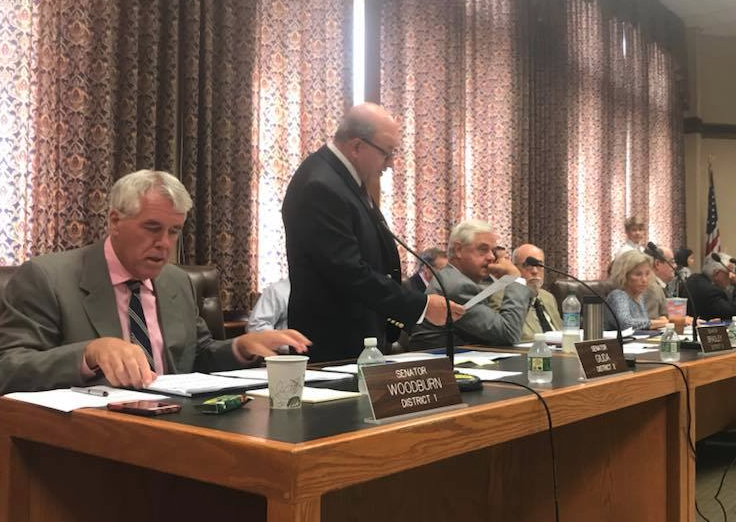 A letter from Senior Assistant Attorney General Geoffrey W.R. Ward to Emily Stone Jacobs’ lawyer indicates she agreed to discuss allegations against Sen. Jeff Woodburn as long as her statements wouldn’t be used against her and she told the truth.

The “proffer” letter to Jacobs’ attorney Patricia LaFrance doesn’t say what crime Jacobs allegedly committed, but in Woodburn’s motion for discovery, his lawyer Donna Brown said Jacobs recorded the Whitefield Democrat  without his knowledge, which is a misdemeanor in New Hampshire. It also mentioned Woodburn’s journal that Jacobs said he left at her house.

The motion, which was filed last week in 1st Circuit District Division – Lancaster, included the full proffer letter from Ward to LaFrance as an attachment on page 52.

“It is understood that after reviewing Ms. Jacobs proffered information the state will explore and evaluate the possibility of Ms. Jacobs cooperating with the state,” Ward wrote. “Therefore it agrees the state will not use any of Ms. Jacobs proffered information provided by her at the proffer against her in any criminal prosecution, except for crimes enumerated in RSA 641:1, 641:2, 641:3 and 641:4; or their equivalents in other jurisdictions, provided that this information is truthful. If Ms. Jacobs knowingly lies during this proffer, the state will be allowed to introduce any and all statements that Ms. Jacobs makes during this proffer or evidence provided by her at the proffer in any and all court proceedings…”

The statutes the letter references 641:1 to 641:4 include perjury, false swearing, unsworn falsification and false report to law enforcement.

Senior Assistant Attorney General Ward declined to comment about the proffer letter and would only say such letters are used for “myriad” reasons.

A proffer letter is an agreement between a prosecutor and a defendant or a witness that their statements won’t be used against them in prosecuting them for a crime, according to veteran defense attorney Nick Brodich of Concord.

“A proffer letter is used in criminal proceedings when a witness has concerns about his or her own criminal liability in testimony that will be provided to the prosecutor,” Brodich said.

Brodich is not connected to the Woodburn case, but agreed to explain what a proffer letter is. Ward wrote the proffer letter to LaFrance dated July 24 and Jacobs signed it the next day. On July 25, Jacobs met with LaFrance, Ward and an investigator, according to Brown’s motion.

“During this meeting, Emily Jacobs admits to recording Mr. Woodburn without his knowledge. During this interview, Ms. Jacobs claims that Mr. Woodburn left his journal at her house and does not admit to stealing it from Mr. Woodburn,” Brown wrote in the motion.

Jacobs, who was previously engaged to Woodburn, is chairman of the Coos County Democratic Committee and is running for Coos County Treasurer.

In court last week, Brown also filed a notice of Woodburn’s intent to argue self defense.

“The evidence at trial will show that the alleged victim, Emily Jacobs, repeatedly tried to block and/or restrain Mr. Woodburn from leaving her, including at one point her brandishing a knife, and that any force Mr. Woodburn used against Ms. Jacobs was necessary for him to use in order to leave or attempt to leave a volatile situation created by Ms. Jacobs,” Brown wrote in the motion.

Woodburn is running against Republican David Starr in the upcoming election.