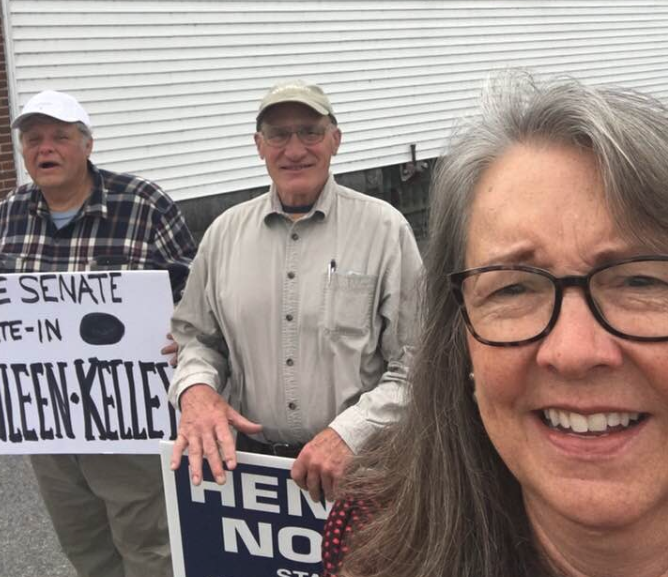 Kathleen Kelley of Randolph, right, is pictured on the campaign trail. She is seeking a recount in her primary race against Senate District 1 Sen. Jeff Woodburn, D-Whitefield.

UPDATE: Kathleen Kelley said she changed her mind later Wednesday and decided not to seek a recount when she got the official tally of 2,354 votes for Sen. Jeff Woodburn and 1,014 for her. She was told since it was such a split, the full cost of the recount would be on her.

State Sen. Jeff Woodburn declared himself the primary winner for the District 1 Senate seat Tuesday night, but his last-minute write-in opponent Kathleen Kelley of Randolph called for a recount Wednesday saying she noticed some anomalies in the unofficial totals. Kelley later changed her mind when she got official numbers showing a big win for Woodburn, which would mean she would have to pay for the recount.

“Due to the unusual event which gave rise to this write in campaign for NH Senate District #1, the team working on the Kathleen Kelley for Senate (campaign) has submitted a request to the Secretary of State’s Office for a recount.  The campaign team would like an accurate reflection of the will of the people in District #1 considering the circumstances,” Kelley sent in an email on Wednesday afternoon before getting the official results.

Her unofficial vote totals didn’t add up, Kelley said in a telephone interview. 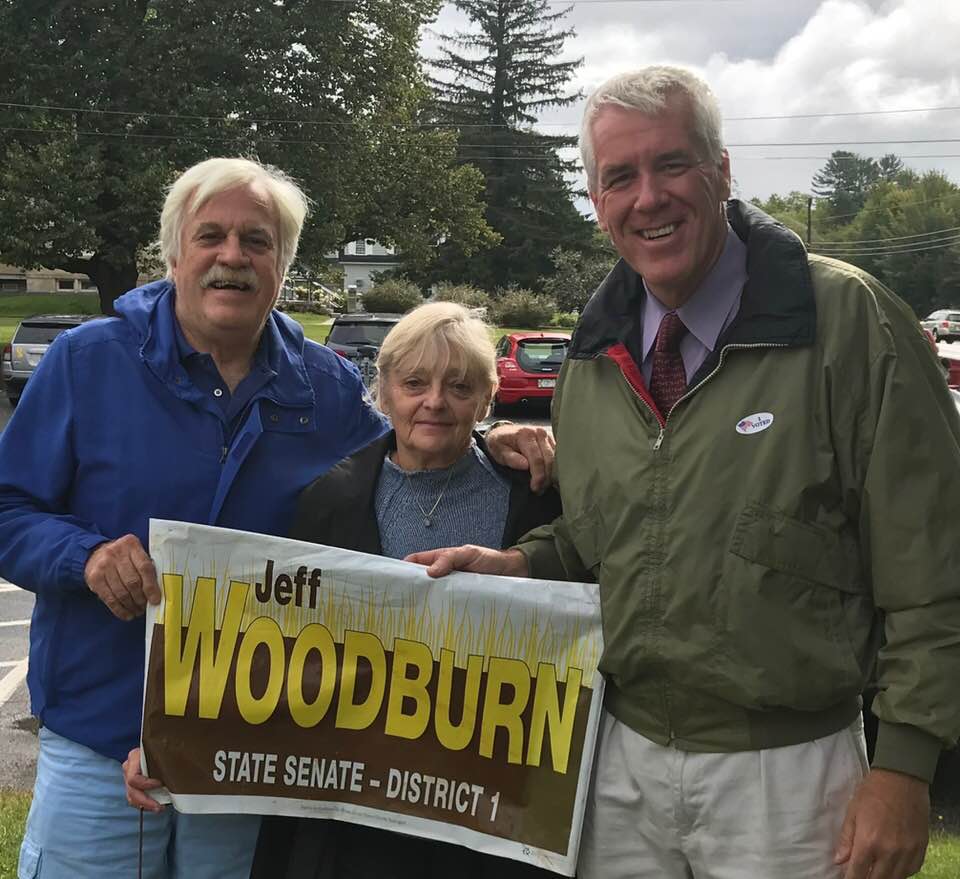 Sen. Jeff Woodburn is pictured on the campaign trail with Mike and Miriam Russell.

“There were write-in votes in every town except for a few and I know people in those towns who would have voted for me,” said Kelley. “The issue is, would there be enough to make a difference?”

Woodburn, 53, who has pleaded not guilty to nine misdemeanor charges involving alleged domestic violence, said that he knows he has the votes to win the Democratic primary and thanked supporters for standing by him.

“I have enough places to know I won big,” Woodburn said.

Late Tuesday, Woodburn posted on Facebook that he was up 65 percent with wins in Berlin and Jefferson and 61 to 39 percent in Gorham, Littleton and Whitefield.

Woodburn said: “A month ago, I suspended my campaign to focus on clearing my name and protecting my family. My friends in the North Country, who know me best, stood by me. Today, the people have spoken and I am grateful and humbled by their support.”

Woodburn a three-term state senator was considered a rising star in North Country and statewide politics until his arrest Aug. 2 when many party leaders called for him to step down. He did step aside as Senate minority leader, but vowed to continue fighting the allegations and representing his constituents.

Kelley is also well-known in the region for her work serving on many boards. She and her husband, Mark, run White Mountain Lumber in Randolph. She has served on the Randolph School Board and is a currently on the board of the North Country Education Services.

She stepped in as a write-in candidate three and a half weeks ago saying the North Country is facing too many serious issues to be represented right now by Woodburn. He would be too distracted fighting the charges against him to provide effective leadership, she said.

Kelley was concerned that the Democrats didn’t take a stronger public stand against domestic violence during the campaign.

That may have been complicated because Woodburn’s alleged victim, Emily Stone Jacobs, chairs the Coos County Democratic Committee and is running for Coos County Treasurer.

Kelley had asked Jacobs to temporarily step down to avoid any appearance of conflict, but she declined, Kelley said. Not tackling domestic violence head-on as a serious issue was a disservice to their constituents, she said.

“It’s a messy situation and I’m not the judge and jury,” Kelley said. “It is about maintaining respect for our constituents. I did the right thing and what I felt needed to happen.”

Woodburn was charged with biting the alleged victim’s arm and hand, hitting her in the stomach, throwing a cup of water in her face, then throwing the empty cup striking her in the face, breaking her dryer by kicking the door, kicking the locked door of her home and trespassing, all misdemeanors.

The state has withheld detailed information about the allegations against Woodburn, including not identifying the alleged victim by name. The Berlin Sun has argued that  court records in his case should be unsealed, but the state says they should remain confidential because the investigation is ongoing.

A court hearing was held Monday in Lancaster on the Berlin Sun’s motion to unseal the Woodburn affidavit and arrest warrant, but the hearing was closed to everyone except the parties in the case.