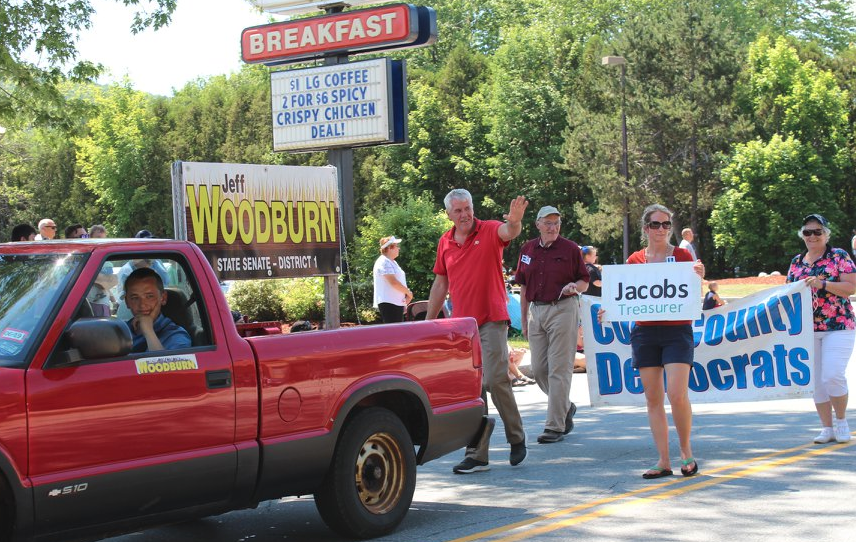 Sen. Jeff Woodburn, D-Whitefield, is pictured waving to the crowd walking next to Emily Stone Jacobs, who is running for Coos County treasurer, at the Gorham 4th of July parade. Last November, Woodburn announced his engagement to Jacobs.

It’s no secret in the North Country who accused state Sen. Jeff Woodburn, D-Whitefield, of domestic violence because she chairs the Coos County Democratic Committee and is running for county treasurer.

But Senior Assistant Attorney General Geoffrey W.R. Ward refuses to release her name citing New Hampshire’s Victim Bill of Rights, although he conceded there is nothing that specifically prohibits releasing the names of domestic violence victims or accusers.

Not only was Jacobs’ name left out of the news release the state emailed to reporters on Aug. 2, the arrest warrant and affidavit in Woodburn’s case have been sealed in 1st Circuit Court-District Division-Lancaster. Ward referred to her only as Woodburn’s “intimate partner.”

Ward wouldn’t say why the records are sealed or why the state filed a motion to seal them. The motion to seal is also under seal, Ward said. Although InDepthNH.org and New Hampshire newspapers generally don’t identify rape victims, the names of all other adult crime victims, including domestic violence, are usually public.

Berlin Sun managing editor Barbara Tetreault has filed a motion to have the Woodburn court records unsealed. She cited a New Hampshire Supreme Court case that places the burden to seal records on the party seeking non-disclosure.

Tetreault said with the Sept. 11 primary approaching, the public has a right to view the records. Woodburn faces a write-in candidate, Kathleen Kelley of Randolph, as a result of the criminal charges against him.

Woodburn’s arrest also breathed new life into the campaign of his Republican challenger, David Starr, who was viewed as a longshot before.

“Voters deserve to know the facts and probable cause used for Mr. Woodburn’s arrest before being forced to make a decision at the polls,” Tetreault wrote. The court has yet to rule.

“There’s not been a change from my perspective,” Ward said. “This is something we have tried to do in a number cases involving our practice to protect victims’ identities from disclosure as much as possible to respect their privacy in these matters.”

Ward recited the first part of the Victim Bill of Rights as his reasoning: “The right to be treated with fairness and respect for their dignity and privacy throughout the criminal justice process.”

Sealing affidavits and warrants is common practice in ongoing investigations to protect the integrity of the investigation, he added.

Woodburn, 53, of Whitefield, has pleaded not guilty, but has yet to address the allegations publicly.

Jacobs appears to have wide support on the Coos County NH Democrats Facebook page that has added the purple ribbon denoting domestic violence survivor to its profile picture. The page also added a TED talk video about why domestic violence victims don’t leave.

A New Hampshire Coalition Against Domestic and Sexual Violence Facebook post urges people to contact the Union Leader “to tell the newspaper to stop naming the victims of crime.” That after the story about Woodburn’s arrest mentioned his engagement to Jacobs.

Amanda Grady Sexton, the Coalition’s director of public affairs, said she was disappointed InDepthNH.org is publishing the alleged victim’s name and will “call out” the nonprofit news outlet for doing so. She said it is best journalistic practice to withhold the name of alleged victims in sex assault, domestic violence and child abuse cases and said a number of New Hampshire news outlets agree with her.

“The Concord Monitor, Seacoastonline, New Hampshire Public Radio and WMUR have all made a commitment not to publish the victim’s name in this case,” Grady Sexton said.

Releasing the names of domestic violence victims can put them in danger and cause them to be discriminated against in housing and employment, she said.

“There is no reason other than sensationalism and trying to sell papers and gain clicks,” Grady Sexton said.

Berlin Mayor Paul Grenier, also a Democrat, stands solidly in Woodburn’s corner. He questioned why Jacobs’ name wasn’t released by the attorney general and why court records are sealed.

“This whole things smells … This is disgraceful what’s happening,” Grenier said. “It was sealed at the request of the so-called victim and the real victim here is Sen. Woodburn.”

Grenier said Democrats were quick to call for Woodburn, who was seen as a rising star in Democratic politics, to step down because he’s “not liberal enough for the ultra-liberals.”

Jacobs continues to run Democratic committee meetings although she has been asked to step down, Grenier said. “Talk about super awkward,” Grenier said.

When the matter of Woodburn came up at last week’s committee meeting, Jacobs didn’t recuse herself, he said. “It was the elephant in the room. This is a circus beyond belief,” Grenier said.

Kathleen Kelley decided to run against Woodburn in the primary as a write-in candidate because there are so many important issues facing the North Country.

Kelley, who lives in Randolph with her husband Mark, who runs the family business White Mountain Lumber Company, is well-respected for her work on many local boards and currently serves on the board of the North Country Education Services.

Kelley spent the weekend campaigning, including five hours at the Moose Festival in Colebrook.

“I’m not judging Jeff at all,” Kelley said, adding they share the same position on many issues. “I know because of these charges he’s going to be busy. He’s going to be in court defending himself.”

She has worked closely with Woodburn and believes he has done a good job.

“It’s going to take time and effort and once this all gets behind  him – if it does – he will be able to come back into service to the North Country because he’s done a great job over the past six years.”

Having Jacobs chair the committee meetings has been an issue, she said. Kelley asked Jacobs to step aside temporarily to avoid any appearance of bias, but she declined, Kelley said.

Kelley agreed with Grady Sexton that the names of all crime victims should be confidential unless the victim chooses otherwise.

Correction: An earlier version of this story should have stated that Berlin Mayor Paul Grenier said Jacobs didn’t recuse herself from last week’s meeting.