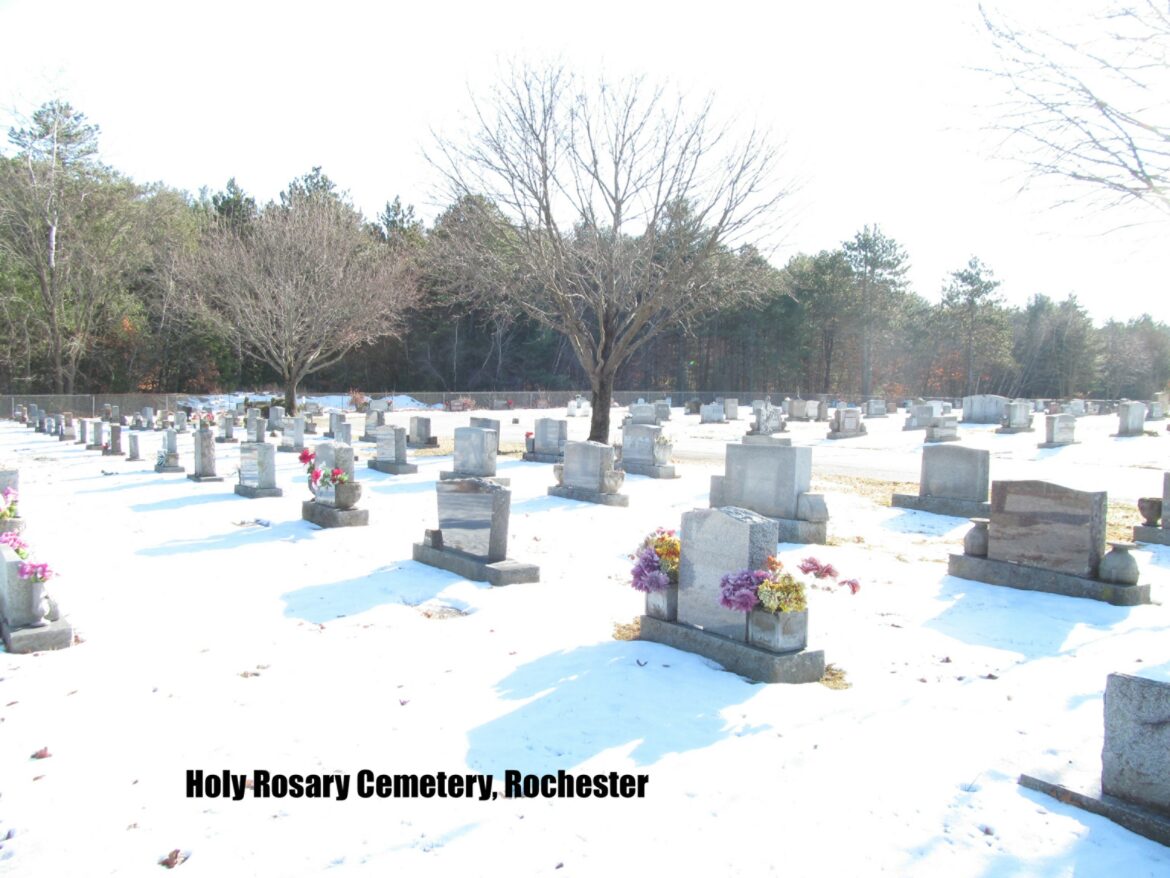 Holy Rosary Cemetery, also known as Saint Rosaire Cemetery, is located on Brock Street in Rochester. It is decorated with a fresh coat of snow on a recent winter day.

Opal L. Bronson, 83, of Jefferson, died Jan. 14, 2023. She served as Jefferson Town Clerk for 52 years, including the early years when she worked out of her home. She was a member of the Jefferson Christian Church, the Highlander Snowmobile Club, and the Jefferson Library, as an active fundraiser. (Bailey Funeral Home)

William E. Kingdon, 94, of Londonderry, died Jan. 14, 2023. A U.S. Navy veteran, he started in 1955 as a call fireman for the Salem Fire Department, where he was promoted through the ranks, becoming chief in 1972. He retired in 1980 and owned and trained horses at several local racetracks. He and his wife lived in Dade City, Fla., for 38 years, where they raised cattle and grew and bailed hay. (Peabody Funeral Homes & Crematorium)

Priscilla Lindquist, 93, of Hampstead, died Jan. 12, 2023. She worked for the town of Hampstead starting in 1963 as a bookkeeper and became the town’s first full-time employee in 1975. She served as administrative assistant to selectmen, retiring in 2003. She successfully ran for the select board and was reelected several times until retiring from public service in 2017. She was an active member of the Historic District Commission/Heritage Commission. (Peabody Funeral Homes & Crematorium)

Terrance A. and Margery W. (Walker) Houle, of Chichester, who were married nearly 70 years, died within two weeks of each other.  Terry, 90, died Jan. 4, 2023, and Marge, 87, died Jan. 16, 2023. Terry was a U.S. Navy veteran and was vice president and secretary of the board of directors of Concord Group Insurance Co.  Marge stayed at home with their children and in later years was a proofreader. They were both members of the Lions and Lioness Clubs for many years. (The Roan Family Funeral Home – Still Oaks Chapel)

Stuart H. Stinchfield, 87, of Wolfeboro, died Jan. 14, 2023. He worked for the family store, Stinchfield’s Market Basket, before taking over the business. He and his wife, Jean, re-invented the store as  Stinchfield’s Ben Franklin, retiring in 1998. He was a long-time member of the Morningstar Masonic Lodge, where he was a Master Mason. He was a Noble of the Mystic Shrine in the Bektash Temple and earned the Scottish Rite degree. (Baker-Gagne Funeral Home and Cremation Service)

Thomas N. Judge, 87, of New London, died Jan. 15, 2023. A U.S. Army veteran, he and his wife Marge raised their family in Newtown, Conn., where he spent 35 years as a teacher and an administrator in Westport, Conn. He was an artist in wood, collected sailing ships, toy cars, tractors and airplanes, and also restored old sports cars. (Chadwick Funeral and Cremation Service)

John A. Blake, 89, a lifelong resident of Swanzey, died Jan. 16, 2023. A woodworker for Frazier Furniture in Swanzey for 20 years, he retired in 1996. He was a member of the Swanzey Volunteer Fire Department for 41 years, retiring as a captain. (Cheshire Family Funeral Home & Chapel)

George William Somero, 80, a lifelong resident of New Ipswich, died Jan. 12, 2023. He was the New Ipswich road agent for many years, later working for Park Construction as a mechanic for 27 years. (Cournoyer Funeral Home & Cremation Center)

Wayne Morris Higgins, 80, of Rochester, died Jan. 12, 2023. A U.S. Navy veteran,  he was a senior chief dental administrative technician and collateral duty career information coordinator, retiring in 1987. He was an active member of the Jaycees in Groton and then the Rochester Jaycees.  He was made a lifetime member in 1993. He worked on parade floats, at the Rochester Fair, 4th of July fireworks, raising money for St. Jude’s and Children’s Christmas. He helped organize several Soapbox Derby rallies sponsored by the Jaycees and also organized the Buddy Car division. (R.M. Edgerly & Son Funeral Home)

Kirsten E. Acker, 15, of Salem, died Jan. 15, 2023. During her short life and in her yearslong fight with brain cancer, she touched many lives, achieving high honors in both 7th and 8th grade at Woodbury Middle School.  She was on the field hockey team, volunteered in clubs, and traveled with her family. Through the Make-A-Wish Foundation, she spoke at fundraising events including the Make-A-Wish Christmas Gala, a Salem High School Key club fundraiser, and Rafting for Wishes.  She helped organize the donation of comfort and activity bags for teens on the oncology and pediatric floors of Massachusetts General Hospital, receiving her Girl Scout Silver Award for her efforts. (Goundrey Dewhirst Funeral Home)

Patricia Catherine (Kirby) Lee, 91, of Temple, died Jan. 13, 2023. She was a registered nurse and worked as a visiting nurse and for a nursing home before raising five children. She was active in the Temple Historical Society, acting as secretary for many years. She was also a member of the Temple Drama Club, the Temple School PTA, the Friends of the Library, and the Ladies Aid Society. (Jellison Funeral Home)

Dr. John K. “Jack” Evans, 82, of Sharon, died Jan. 12, 2023. With a Ph.D. in education, he worked in the technology industry for a few years and then became a professor of business at Southern New Hampshire University for 33 years. (Jellison Funeral Home)

Norma Soledad Albano Ramirez, 69, of Manchester, died Jan. 18, 2023. She was one of Manila’s renowned jazz singers during the 1970s and 1980s, including lead singer of the Batucada band formed by Bong Penera.  Her signature song, “A Samba Song,” recorded in 1976, hit the international charts. She was born in Hawaii and studied at the University of the Philippines, College of Music. Batucada, a Brazilian musical expression with African roots, is a substyle of samba and refers to a percussive style, usually performed by an ensemble, known as a bateria. (Michaud Funeral Home & Crematory)

Roy Malool, 96, of Newport, died Jan. 15, 2023. He formed the private Roy Malool Family Foundation to fund Newport community projects, including the bronze bust of Sara Josepha Hale in the Richard’s Free Library park. In 2010, he donated a one-room schoolhouse in Dodge Hollow to the Lempster Historical Society. A veteran of the U.S. Merchant Marine,  he formed a company called Roymal Inc. in 1956, growing it into a global supplier of clear water-based coatings for the graphic arts industry. He served on the board of trustees of the Newport Hospital, Citizen National Bank, First Citizen Bank and Bank East, all of Newport. He was also a member of the board of Verlan Limited of Hampton, Bermuda, and Silver Springs, Md. He also served on the Library Art Center Endowment Fund Committee. (Newton-Bartlett Funeral Home)

Robert D. Leahy Jr., 87, of Peterborough and formerly of Keene, died Jan. 18, 2023. A U.S. Navy veteran, he worked for Markem Machine Corporation, serving as credit manager before retiring. He also worked for a decade in the Cheshire County Registry of Deeds office. He was a member since 1975 of the Keene Lion’s Club, serving as governor in 1993-1994. (DiLuzio Foley And Fletcher Funeral Homes)