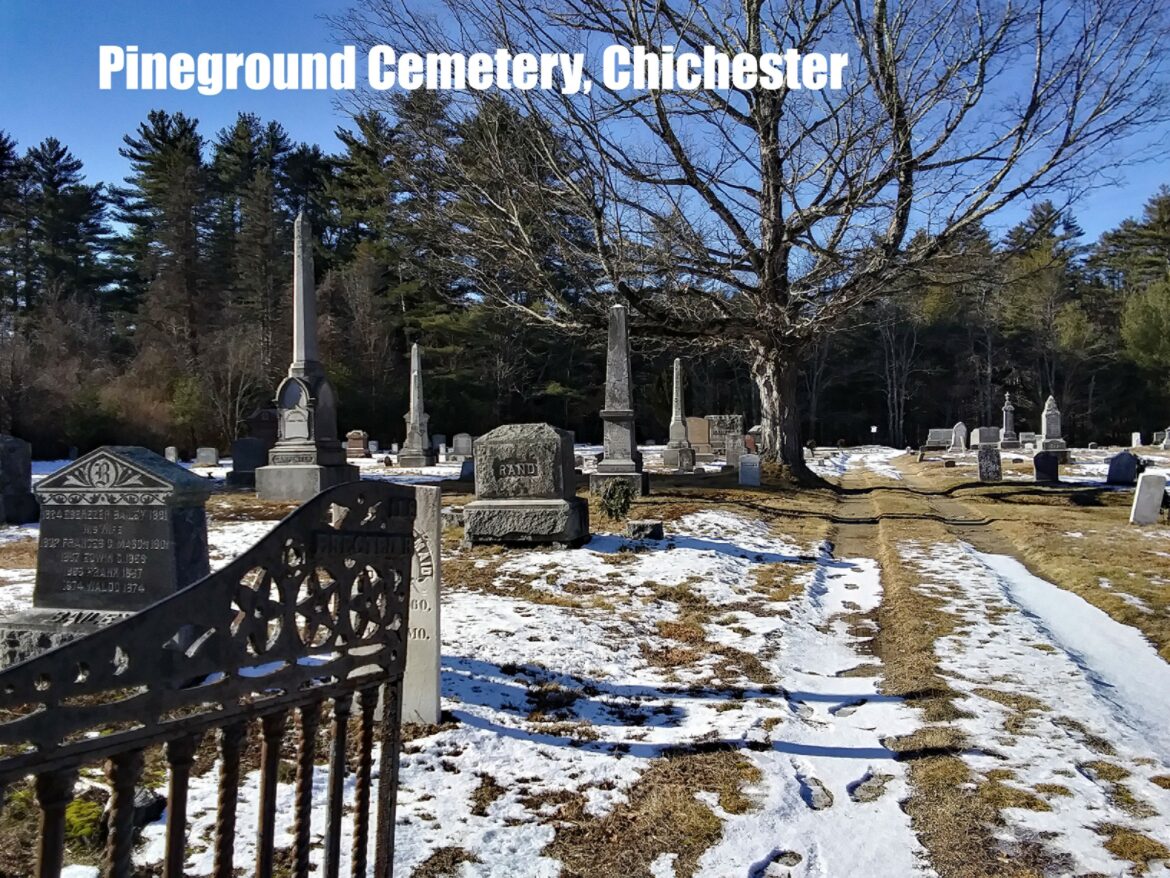 Pineground Cemetery on Route 28 in Chichester. According to town historical records, in 1826, two acres were set aside as a burying ground. While some of the stones are dated at the beginning of the 19th century, field stones in one area indicate interments began during the late 18th century.

Pulitzer Prize-winning poet Charles Simic, 84, the nation’s Poet Laureate from 2007 to 2008, died Jan. 9, 2023, at an assisted living facility in Dover. He taught courses in American literature and creative writing for decades at UNH. He received the Pulitzer Prize for Poetry in 1990 for “The World Doesn’t End.” Simic was born in Serbia in 1938 and emigrated to Paris and then to the United States in 1953. According to published reports, he didn’t write in English until well into his 20s. He worked as a payroll clerk and house painter to pay for college, taking night courses at the University of Chicago and then New York University, graduating in 1966 with a degree in Russian studies. He published dozens of books and was ranked by many as among the greatest and most original poets of his time. He was a finalist for the Pulitzer Prize in 1986 for “Selected Poems, 1963–1983” and again in 1987 for “Unending Blues.”  (Wiggin-Purdy-McCooey-Dion Funeral Home)

Philanthropist, entrepreneur, and Portsmouth gastroenterologist Dr. Geoffrey E. Clark, 84, of Portsmouth, died Jan. 10, 2023. He and his wife, former state Sen. Martha Fuller Clark, have been generous benefactors to New Hampshire groups serving children, women, and the environment. The Clarks moved to Portsmouth in 1973 and served on more than 40 boards over the years. Dr. Clark served for more than 32 years as a doctor at Gastroenterology Professional Association. He was also co-founder and first medical director of Braintree Laboratories Inc. and was medical director at the pharmaceutical developer Ischemix, working to find treatments for heart and kidney disease. He was also involved in documentary filmmaking, including “Abandoned in the Arctic,” which re-traced the efforts of an explorer in 1881-1884 by sea kayak 700 miles from the North Pole. He volunteered as a worker and board member with Theatre of the Seas, which became the Seacoast Repertory Theatre. In 2019, the New Hampshire Women’s Foundation honored the Clarks for their commitment to women and girls in New Hampshire with the AmplifiHER Award. (Lucas & Eaton Funeral Home, York, Maine)

Dennis “DJ” Belanger, 31, of Milford, died Jan. 9, 2023. He and his wife Patty are the owners of Culture Bread LLC in Milford. He received his associate degree at Le Cordon Bleu and was an executive chef at Burton’s Grill and Bar. (Dumont-Sullivan Funeral Home)

Thomas Howard Englund, 82, of Dunbarton, died Jan. 6, 2023.  He was dean of students at Gordon College, director of a federal grant in Washington, D.C., dean of faculty at Franklin Pierce College, and president of a consortium of 13 Christian colleges across the U.S. He helped establish a Christian university in Nairobi, Kenya, named Daystar. He served on Daystar’s support organization of the U.S. board of trustees for many years, serving as interim chairman. (Bennett Funeral Home)

W. Barry Wright, 83, of New London, died Jan. 7, 2023. A U.S. Army veteran, he and his wife operated Wildberry Bagel in New London and in 2008, launched New Hampshire’s Edible White Mountains, a local food magazine. He volunteered for Upper Valley SCORE (Senior Core of Retired Executives) in Lebanon. Through the Council on Aging in New London, he drove patients to medical appointments. He served on New London’s Budget Committee and for the past 18 years and volunteered at Dartmouth Hitchcock Medical Center. (Chadwick Funeral and Cremation Service)

Michael “Mike” E. Martineau, 69, of Keene and formerly of Spofford, died Jan. 6, 2023. A U.S. Army veteran, he owned M Martineau Plumbing and Heating in Spofford for more than 30 years. He was a member of the American Legion in Keene and volunteered for 13 years as a firefighter with the Spofford Fire Department. (Cheshire Family Funeral Chapel)

Thor Michael Grenier, 63, of Dublin, died Jan. 6, 2023. A U.S. Navy veteran, he was co-owner/co-founder of Hampsey & Grenier Associates, Realtor, for more than 30 years. He helped start the Jaffrey Sponsor a Highway Program and was a long-time member of the Jaffrey Chamber of Commerce. He spent many years on the Pastoral Council at St. Patrick Church in Jaffrey. (Cournoyer Funeral Home & Cremation Center)

Sylvia Hight Brown, 87, of Weare, died Jan. 5, 2023. She was involved in the Weare Fire Auxiliary, PTA, the Weare Historical Society and the Chase Park Recreation Committee, serving as secretary to both. She was a member of the Weare Winter Wanderers Snowmobile Club for several decades, serving as treasurer for many years. (French & Rising Funeral Home)

Gary W. Richardson, 85, of West Stewartstown, died Jan. 10, 2023. A U.S. Navy veteran, he was a former forest fire warden for the Town of Stewartstown. He owned and operated Currier’s Store from 1969-72. He was a member of the Beecher Falls Volunteer Fire Department for more than 40 years, serving as secretary and treasurer of the department. He was a certified fire instructor for both New Hampshire and Vermont and a member of the Vermont State Firemen’s Association. He was also a former instructor for the N.H. Hunter Safety courses. He was a long-time member of local granges, including the Frontier Grange and the Aurora Grange in Pittsburg. (Jenkins & Newman Funeral Home)

Dennis I. Withee, 78, of Hooksett and formerly of Manchester and Bedford, died Jan. 11, 2023. A U.S. Army veteran, he taught 7th and 8th grade science at Southside Junior High School, retiring in 1996. He and his wife, Evelyn, opened The Teach & Learn Shop, a retail business that sold teaching aids and school supplies in Manchester for 30 years.  He was a founding member of the Manchester Junior Soccer League and coached youth soccer teams. (Lambert Funeral Home & Crematory)

Hermine Spiewak, 95, of Londonderry, died Jan. 7, 2023. She had been a ballet teacher for many years and was involved with the New York City Ballet and the Boston Ballet. She volunteered with the American Red Cross and was active in St. Mark the Evangelist Church. (Peabody Funeral Homes & Crematorium)

Robert A. Srnec Sr., 79, of Milton, died Jan. 6, 2023. A U.S. Air Force veteran, he was a former Milton selectman, member of the budget committee and an EMT with the Milton Ambulance. He was also a former Cub master with the Boy Scouts. He retired from the N.H. Air National Guard. He was a member of the VFW and American Legion in Milton and worked at Pratt & Whitney and at Thompson Center Arms. (Peaslee Funeral Home)

Dr. Alphonse Joseph (Skip) Homicz Jr., 77, of New Castle and formerly of Peterborough, died Jan. 10, 2023. A U.S. Navy veteran, he attended Columbia University School of Dental and Oral Surgery and served as a lieutenant in the Dental Corps of the U.S. Navy. He went into private practice in Antrim, where he was a dentist for 35 years. He was president of the New Hampshire Dental Society and was awarded a fellowship in the prestigious International College of Dentists. He made numerous trips to Haiti with the Sisters of Charity and the Haitian Health Foundation to provide dental and medical services to rural villages. He was director of the Families First Dental Clinic in Portsmouth and consulted federally qualified health centers. (Remick & Gendron Funeral Home and Crematory)

Faith (MacLaine) Murray, 83, of Hampton, died Jan. 8, 2023. She worked in surgical medical offices for more than 60 years and retired from Anna Jacques Hospital in Newburyport, Mass., at the age of 80.
In Newburyport, she was involved in the city’s annual Yankee Homecoming Week, chairing the program committee and hosting the entertainers of the “Old Fashion Sunday” event. She hosted many election night parties while her husband David was a city councilor.  She worked on Newburyport’s Bicentennial Anniversary Celebration in 1976 and was active in the Immaculate Conception Church. (Remick & Gendron Funeral Home and Crematory)

Norman Silberdick Jr., 80, of Hampton, died Jan. 7, 2023. He began his career at Silberdick & Peritz while in college as an apprentice and left as an accountant. At The Singer Company he was a manager of financial analysis for the European Consumer Products Division and then manager of operations analysis for the European Industrial Products Division. He created Silberdick & Company, a management consulting practice specializing in capital formation, corporate development, turnarounds, crisis management and start-ups. He was principal/partner of several consulting companies prior to his retirement. He was an assistant professor of management at Keene State College and was an adjunct professor at UNH and New Hampshire Technical College. He was chairman of the Hampton Trustees of the Trust Funds, a member of the Recycling Committee, the Budget Committee and the Hampton School Board. He was a 19-year volunteer for Seacoast Hospice. (Remick & Gendron Funeral Home and Crematory)

Terry-Anne Steady, 75, of Northfield, died Jan. 5, 2023. She was a Northfield supervisor of the checklist from 1988 until 2022, and she and her husband Robin were honored as Northfield Citizens of The Year in 2017. She worked for the State of New Hampshire for more than 35 years, in the Personnel Department, Health and Human Services, Department of Resources and Development and retiring from the Department of Graphic Services. (Smart Memorial Home)

Maurice “Nicky” Clairmont Jr., 59, of Belmont, died Jan. 8, 2023. He was a NASCAR crew chief for drivers Ricky Craven, Dale Shaw and Kelly Moore, helping each win the Busch North championships during his long career.  He was a self-employed mechanic in Belmont and also ran a street-sweeping business, Clairmont Sweeping, which he operated for more than 30 years. (Wilkinson-Beane-Simoneau-Paquette Funeral Home & Cremation Services)

Col. Normand Henry Lacasse, 85, of Belmont and formerly of Gilford, died Jan. 7, 2023. He was a veteran of the N.H. National Guard and was commissioned a second lieutenant in 1962, serving in Vietnam as executive officer and commander of several units and battalions. He retired in 1996 as a colonel and director of maintenance for the N.H. National Guard. He was a longtime member of the Elks and American Legion. He was Exalted Ruler of the Elks Lodge 876 and worked in construction management for NCM Associates and later at NHL Consulting. He was the chief estimator for sewage treatment and water treatment plants. (Wilkinson-Beane-Simoneau-Paquette Funeral Home & Cremation Services)