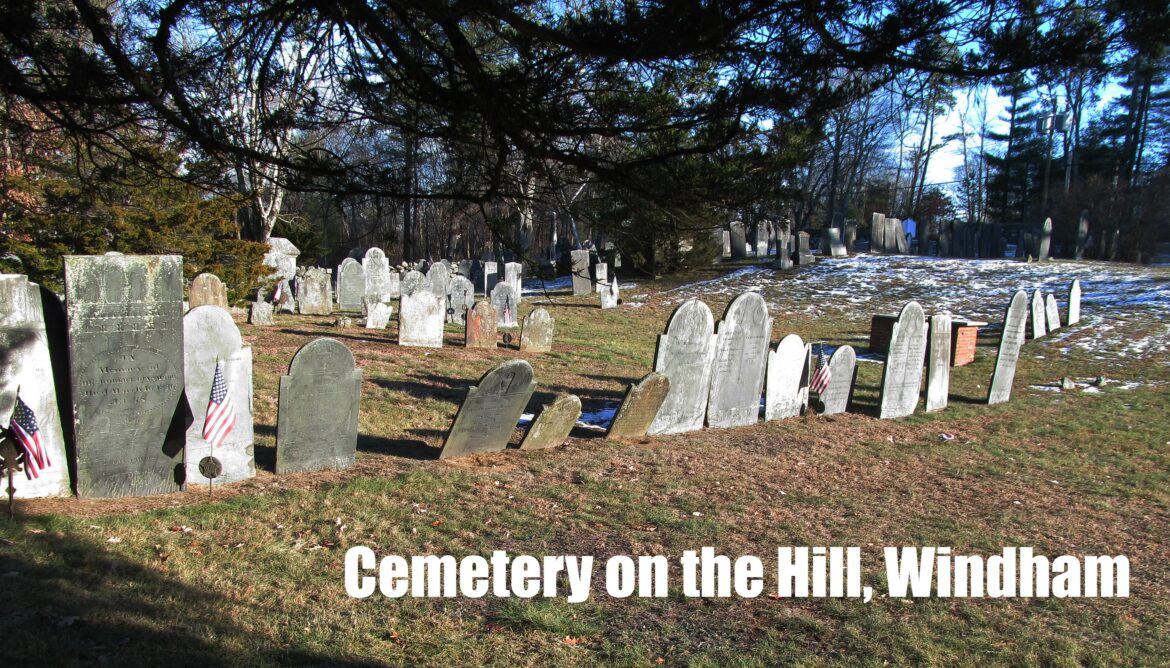 The Cemetery on the Hill is located on Range Road (Route 111A) near Cobbett’s Pond in Windham. The first person reported to be buried there was early settler William Bolton, who was born in 1682 and died in 1755.

North Country publisher, avid outdoorsman, and newspaperman John D. Harrigan, 75, of Colebrook, died Dec. 26, 2022. He was a columnist here at InDepthNH.org writing “The View from Above the Notches.” He worked for several years full-time for the New Hampshire Sunday News early in his career, which kept running his column “Woods, Water and Wildlife” long after he left. His column ran for 37 years, one of the longest-running columns in New Hampshire. He was propelled into the national spotlight 25 years ago this past summer when a deranged man stormed into his newspaper’s offices and killed his beloved companion, Vicky Bunnell, friend and editor, Dennis Joos, and two State Troopers, Scott Phillips and Leslie Lord. John himself was spared that day because he was filling in for an employee at his other newspaper. The News and Sentinel staff headed by John got the story and the newspaper out the next day, giving the newspaper a first finalist for the Pulitzer Prize. He continued to write North Country Notebook for the dozen papers in the Meredith-based Salmon Press. At one time, he owned the Coös County Democrat and The Northern Beacon in Lancaster and the News and Sentinel in Colebrook, as well as Coös Junction Press, a newspaper printing plant. In 2020, the New England Newspaper and Press Association named him to its New England Newspaper Hall of Fame. (Jenkins & Newman Funeral Home)

Former Weare Fire Chief Raymond Towle Eaton Sr., 91, of Weare, died Dec. 22, 2022. A U.S. Air Force veteran of the Korean War, he worked for the U.S. Postal Service until his retirement in 1998. He was a Hillsborough County deputy sheriff until 2005. The Weare Fire Department issued a release on his passing, noting, “Chief Eaton dedicated 67 years of service to the Weare Fire Department, starting in July 1955 and serving until 2022. Throughout his tenure, he held various positions, including chief from 1974 to 1976, interim chief from 2009-2011, forest fire warden, fire commissioner, and auxiliary police officer.” He also served on many town boards including the school board, trustees of the trust funds, cemetery trustee, ballot clerk and the cable committee. He was a member of the American Legion Post 65 since 1954 and served as treasurer of Boy Scout troop 24. He was a Little League coach and umpire and a long-time member of the Weare Historical Society. (French & Rising Funeral Home)

Elizabeth “Becky” L. (Legros) Herrmann, 62, of Concord, died Dec. 22, 2022. A job as a library page at
age 17 turned into a 41-year professional career in libraries, including the Concord Public Library and
Penacook Branch, the Providence Athenaeum, the Narragansett Public Library, the Bedford Public
Library and the Hopkinton Town Library, where she oversaw the construction of a new facility. She was named 1997 New Hampshire Librarian of Year. For the past 21 years, she served as director of the
Chelmsford (Mass.) Public Library. In 2002, she married Michael Herrmann, the owner of Gibson’s
Bookstore in downtown Concord. (Bennett Funeral Home)

William Sloan Berger, 82, of New London, died Dec. 24, 2022. He began his career with National Cash Register (NCR) in Dayton, Ohio, in 1964, relocated with the company to Mexico City, then to Bogota, Colombia, where he was president of NCR Colombia. He then became an investment banker in Colombia. The family moved to their summer home on Little Lake Sunapee in 1979.   He and his wife owned The Country Press and published The Kearsarge Shopper. He served on business, civic and philanthropic boards in the Sunapee area, including on the budget committee, the boards of King Ridge, New London Trust, Charter Trust, New London Historical Society and the founding board of Ausbon Sargent Land Preservation Trust. He was a trustee of Colby-Sawyer College and an active member of St. Andrew’s Episcopal Church. He and his wife Jeanine received the college’s Town Gown Award in 1996 and the New London Service Organization Third-of-a-Century Award in September of 2022. (Chadwick Funeral and Cremation Service)

Eileen (Richmond) Resnick, 80, a lifelong resident of Manchester, died Dec. 28, 2022. She and her husband, Jack Resnick, owned and operated the family business, Tiny Totland in Manchester, until her retirement. (McHugh Funeral Home)

Brenda N. Carney, 75, of Stewartstown, died Dec. 25, 2022. She served as West Stewartstown’s tax collector, ballot clerk and auditor. She was one of the original members of the Stewartstown Day Committee and served for more than 40 years. She and her husband received the Community Citizens Award for their community service in 2004. She was an active member of the Canaan Alumni Association and served as treasurer. She was employed by the Coös County Nursing Hospital for 29 years. She and her husband started a local tennis court in the 1970s and operated Carney Auction Service for 27 years. (Jenkins & Newman Funeral Home)

The Hon. Robert Taft, 92, of Peterborough, died Dec. 26, 2022. He lived in Greenville for 76 years. A U.S. Army veteran, he was the longest-serving sitting judge in New Hampshire’s municipal court system, retiring in 2000.  He practiced law with Fernald, Taft, Falby & Little in Peterborough his entire career, retiring in 2010.  He was a member of Grand Monadnock Rotary Club, Bethel-Souhegan Masonic Lodge, the Amoskeag Veterans and the American Legion.  (Jellison Funeral Home)

Helen Louise Hutchins, 96, of Concord, died Dec. 19, 2022. Diagnosed at a young age with visual impairments, she dedicated her time for over 30 years to the National Federation of the Blind of New Hampshire by serving on committees and holding office on both the local and state levels. She was awarded the Henry J. Van Vliet Memorial Award in recognition of her years of services and efforts to help her fellow blind. She worked as a transcriber and word processor specialist for Blue Cross Blue Shield. She sang in her church choir, taught Sunday school, and served on youth and missionary committees. (Bennett Funeral Home)

Walter E. Weiland, 91, of Durham died Dec. 23, 2022. A U.S. Army veteran of the Korean War, he was a professor at the University of New Hampshire for more than 30 years.   He first came to UNH in 1964 as  head coach for the men’s varsity soccer team.  When he retired from UNH, he was assistant dean of health services. (Stockbridge Funeral Home)

Krystyna Mazzaglia, 85, of Hampton, died Dec. 26, 2022. A native of Poland, she owned and operated two beauty salons in Methuen, Mass. She and her husband Angelo owned and operated two motels for almost 30 years: The Sylvan Pines Motel in North Conway, followed by the Seascape Inn at Plaice Cove in Hampton. (Remick & Gendron Funeral Home-Crematory)

Paul Ignatius Megan Sr., 90, of Manchester, died Dec. 27, 2022. A native of Belmont, Mass., and U.S. Army veteran of the Korean War,  he lived in Acton, Mass., for 47 years and taught history, then special education, at the middle school level in the Lawrence school system. He volunteered as a Little League coach, adult leader for Boy Scout Troop 32 in Acton, and the booster club for Acton-Boxborough High School’s football team.  He was a senior staff member at Boy Scout Camp Wanocksett in Dublin and was president of the Saint Anselm College Varsity Club.  He supported his longtime church, St. Elizabeth’s of Hungary Catholic Church in Acton, where he was a eucharistic minister and volunteered on several ministries. (Acton Funeral Home, Acton, Mass.)

Dr. Thomas J. Rainville, 87, of Bedford, died Dec. 26, 2022. A U.S. Army veteran, he served as commander of the 50th Clearing Company and the 47th Medical Battalion, reaching the rank of major. He was chief of pediatrics at Fort Eustis Army Hospital in Newport News, Va., and Fitzsimons Army Hospital in Denver, Colo. He was a board-certified pediatrician and a founding partner of Stamford Pediatrics  in Connecticut. He was an attending physician and assistant chief of pediatrics at Stamford Hospital. (Lambert Funeral Home & Crematory)

Dr. Lawrence Richard Zukerberg, 63, of Newmarket and Newton, Mass., died Dec. 26, 2022. For three decades, he was a pathologist at Massachusetts General Hospital. He was a stock market guru and loved discussing anything related to the stock market and investments.  (Kent & Pelczar Funeral Home & Crematory)

Robert R. Francoeur, 96, a lifelong Nashua resident, died Dec. 23, 2022. A U.S. Navy veteran during World War II, he was a longtime employee of Nashua Corporation, where he worked as a machine operator.   An avid candlepin bowler, he was a five-time New Hampshire State Champion and Nashua City Champion. He was inducted into the International Candlepin Bowling Association’s Candlepin Hall of Fame in 1993.   Bob also loved playing billiards and was known as “Banker Bob.” He was a life member of the American Legion Post 48 of Hudson. (Farwell Funeral Service)

Armand H. “Tiny” Gaudreault, 86, of Manchester, died Dec. 26, 2022. A N.H. National Guard veteran, he retired as master sergeant after 31 years of service. He was a finish carpenter by trade and started his own construction business, AKM Corp.  In 1970, he became Manchester’s assistant building inspector and retired in 1998 as Manchester building commissioner. He was chairman of the Manchester Planning Board, chairman of the Plumber’s Licensing Board in Concord, and represented the Plumbing and Heating Contractors of New England in Washington, D.C. He was instrumental in the development of the Building and Construction Program at the Manchester School of Technology.  (Connor-Healy Funeral Home and Cremation Center)