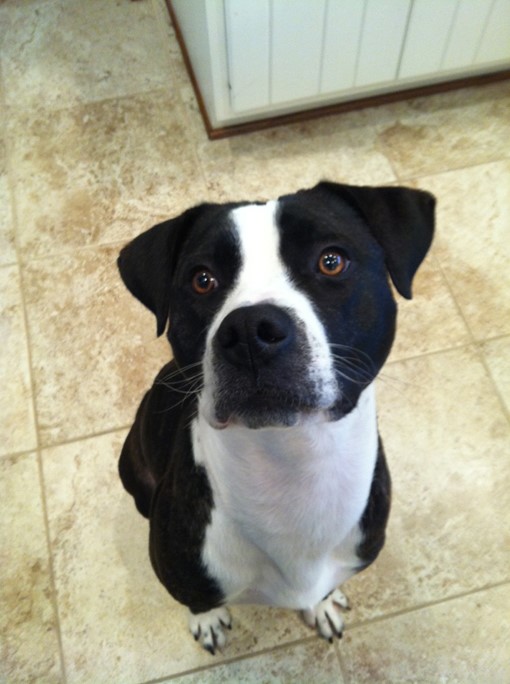 Editor’s note: InDepthNH.org has launched a new project called Celebrating Pets. You can write about your beloved pet on our Celebrating Pets page. For $20, you can share your love and joy for your pet, with a portion of that money going to animal rescue organizations. For more information, go to: https://indepthnh.org/pets/

Ike was adopted from a humane society in Michigan.  I was going through a tough time, and my parents suggested volunteering at a shelter to help animals and keep myself preoccupied with something positive and uplifting.

Naturally, I asked about adopting a dog instead of asking to volunteer.  I walked up and down each aisle, looking from one dog to the next.  I felt a huge sense of sadness and pity for each of those innocent animals.  I made my way to the very last aisle, and in the very last kennel I saw a malnourished, overly-skinny, and overly-happy pup named Ike with the biggest square head and such innocent eyes.  His tail was wagging in full circles, like a helicopter, just because I had approached his door.

I immediately felt a connection – this dog looked as though he should be miserable, but instead he showed nothing but love and happiness.  I called my dad and begged him to come meet this special dog and told him I could not leave Ike there.  Begrudgingly, my father arrived and asked for all information about Ike.

As it turns out, Ike was a three-year-old American Pitbull Terrier, a surrender from a family in Detroit who could no longer feed or care for him.  No other history was known of his life other than the high likelihood of being a “bait dog” in dog fighting rings in Detroit.  He was 20 pounds underweight, had worms, and had kennel cough.  He also happened to be on their kill list and was to be euthanized in under one week if no one adopted him.  My parents were less than convinced on bringing an unhealthy, potentially broken dog into their home, but they saw that the benefits of my brothers and I having an animal to look after were worth the risks.  We brought Ike home, and things were never the same.

Ike was a mischievous, rambunctious, but harmless and loving boy.  He chased squirrels and chipmunks because he wanted to be friends, tried to hump almost every person and dog he met, attempted to jump our 8-foot privacy fence, broke multiple leashes and collars with his brute strength and sheer will, and shredded every bed, blanket, and toy that was given to him.  He loved to wrestle with my dad and run around doing what we called his “butt-tuck run.”  He was so high energy, yet so loving and caring when the time called for it.  If anyone was sad, injured, lonely, or needed some snuggles, he was right there looking at you with his sweet, golden eyes.  Ike brought out the best in each of us during his ten years of life with my family: patience, compassion, happiness, empathy, and good, old-fashioned FUN.

Even when Ike was rushed to Port City Veterinary Referral Hospital, he was still wagging his tail and greeting the staff, all while showing no signs of pain or sadness.  He was taken into surgery that day due to a tumor and internal bleeding, and the vet removed his spleen.  Unfortunately, the vet found signs of cancer during the surgery, hemangiosarcoma to be precise.  This type of cancer is aggressive and incurable, and spreads through the blood vessels quickly.  Ike’s fight with cancer only lasted about five or six weeks, and during that time he was still his playful and goofy self.  We cooked him delicious meals every day, spoiled him rotten with toys and treats, and let him get away with pretty much whatever he wanted.  Ike even found a little skunk friend that he most likely regretted saying hello to afterwards.

My biggest fear was if I could understand when Ike wanted to go, or if I would hold out hope for too long because I was selfish, and then he would feel pain or suffer.  But he let us know exactly when he was ready, on a rainy, windy, cold April morning.  It was ironic at the vet hospital; Ike wagged his tail and comforted his family to the very end.  It was one of the most painful moments in my life so far, letting go of my best friend and having to trek on without him.  But I learned some of the most valuable lessons from him, and I keep them close to my heart always.

Chelsea Hensley graduated from Salem State University with two bachelor’s degrees: Geological Sciences and Communications in Advertising. She worked in the environmental consulting field for multiple years after graduating, and currently is a stay-at-home mom and assistant editor for InDepthNH.org.