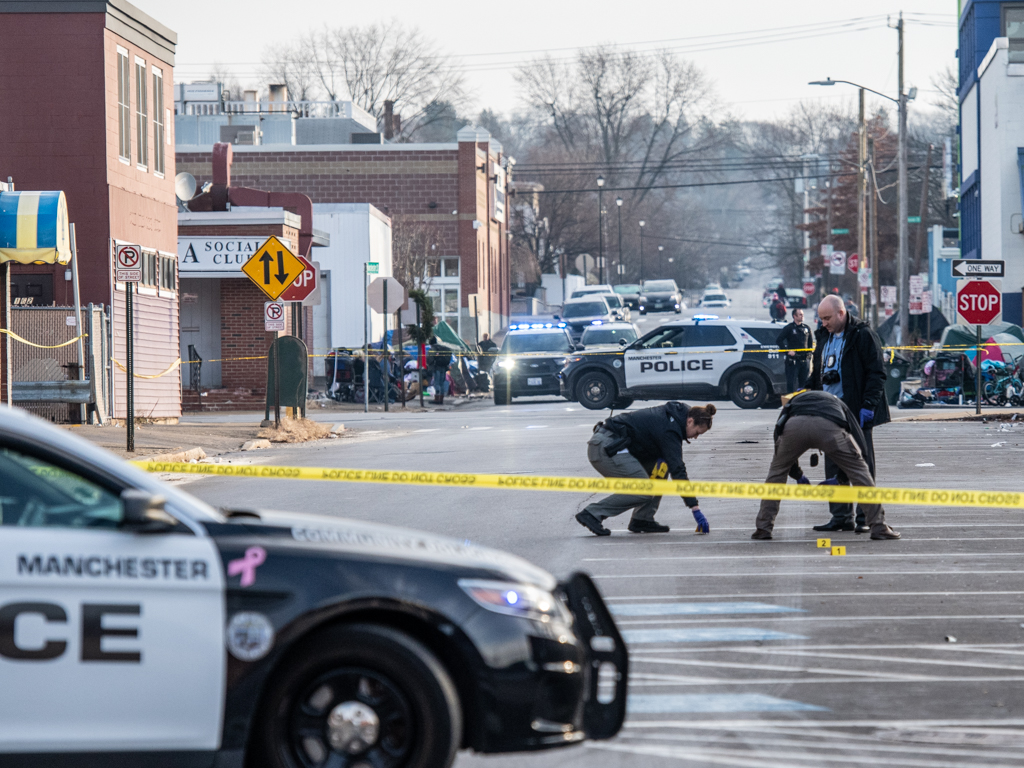 Manchester police lay down markers in the area of large fight and stabbing in Manchester Saturday morning.

Manchester Police spokesman Heather Hamel confirmed there was a large fight and stabbing Saturday morning behind the old police department at 351 Chestnut St. near the Families in Transition shelter at 199 Manchester St.

An unidentified person was stabbed and several people suffered injuries during the altercation, Hamel said. They were all non-life threatening. Identities weren’t immediately available.

Hamel said several people were also taken into custody on outstanding warrants. The incident is still under investigation and currently there are no charges immediately associated with it, she said.

Fire and AMR arrived at 6:45 a.m. Saturday. Police worked to separate several people physically fighting and engaged in verbal altercations, according to witnesses who spoke to Manchester Information.

A man was bleeding profusely while laying on the ground and was placed in the AMR ambulance, witnesses said. Firefighters assisted the AMR crew and multiple firefighters gave medical aid as the person was transported to the Elliot Hospital.

Police said a homeless woman, Alexandra Eckersley, 26, gave birth in a tent in a wooded area of Manchester on Dec. 26 at about 12:30 a.m. and was arrested for allegedly abandoning the newborn in a tent for more than hour. The newborn boy was taken to Dartmouth-Hitchcock Medical Center in Lebanon.

Alexandra Eckersley is the adoptive daughter of Major League Baseball Hall of Famer and retired Red Sox broadcaster Dennis Eckersley. Her family has been critical of the resources available to people with mental illness.

“As in many states, the mental health system in New Hampshire is broken. The state hospital used to have 2,500 psychiatric beds. Now there are less than 200 for more than 1.2 million citizens and the state was forced to eliminate another 48 beds this fall because of staff shortages,” the Eckersley family said in a statement asking that their daughter not be judged.

Jake Leon, spokesman for the state Department of Health and Human Resources, released a statement responding to the Eckersley family. Gov. Chris Sununu didn’t respond to questions posed since Christmas about the homeless situation.

“We hold all who are affected by this complex case in our hearts for all the pain they have endured. There is no simple solution to address the intertwined issues of homelessness, mental illness and substance misuse, and yet we remain fiercely committed to doing everything we can to help all who find themselves in such a position,” Leon said in an email.

“Mental health care in this country has evolved past the grim days of institutionalization. In New Hampshire, the mental health system is being transformed to ensure greater access to the community-based services people with mental illness need, helping prevent many situations from becoming more acute and supporting people in their journey of healing and recovery. The State’s 10-Year Mental Health Plan provides a roadmap for an improved, enhanced, and robust mental health system.

“Expanded community-based services for people experiencing mental illness and substance misuse have been implemented in the past five years, including NH Rapid Response, a centralized access point with mobile crisis response that was launched on January 1, 2022, and the Doorways system that is accessible on a 24/7 basis to help individuals dealing with substance misuse.

Manchester Mayor Joyce Craig and Gov. Sununu continue to spar over how much the state should be involved in the homeless crisis. Craig said the number of homeless in the state has tripled since the pandemic.