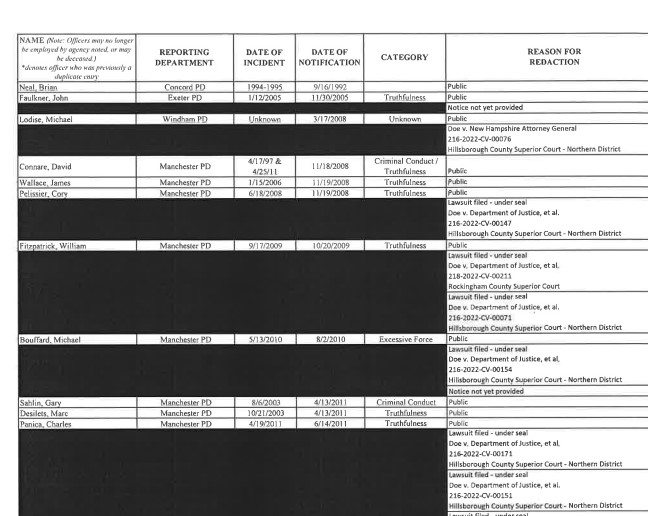 Screenshot of a portion of the Exculpatory Evidence Schedule released Nov. 7, 2022. See rest of the list in the story.

After being delayed for more than a month, the Attorney General’s Office says the just released Exculpatory Evidence Schedule, also known as the Laurie List of police officers with sustained credibility in their disciplinary file, and compliance report are not, in fact, late.

A total of 72 officers and former officers have filed lawsuits in Superior Court seeking to have their names removed before they become public because of the new law passed last September.

Under the terms of the law that makes public some of the names of police officers on the EES, the New Hampshire Attorney General’s Office is supposed to release updated versions of the list and compliance report on a quarterly basis.

The current fiscal quarter started in October, and the updated report was not released until late last week. Michael Garrity, communications director for New Hampshire Attorney General John Formella, said the delay of more than a month does not make the list late.

“Our filing was not late, the reports are required quarterly (no specific date) and we are still in the fourth quarter,” Garrity said. “The evolving litigation related to EES requires the Office to be especially diligent and deliberate in finalizing these reports. Important developments happen every week in the civil cases, and we want to make sure the report is as accurate as possible when it’s issued, while also making sure we are protecting anonymity as required under the statute.”

The law requires the names on the list be made public but gives people on the list the opportunity to file a lawsuit to argue why their name should be removed and remain confidential until a judge makes a final determination.

These numbers do not include the 30 officers who were removed from the list since 2018 under an internal protocol at the Attorney General’s Office or the names of corrections officers that were removed because they didn’t fit the criteria of the new law.

The Laurie List is supposed to contain the names of officers with sustained discipline for dishonesty or excessive force in their confidential personnel files that could impact their truthfulness while testifying at trial.

The list is meant to alert prosecutors in cases that should be disclosed to criminal defendants who are constitutionally guaranteed all evidence that is favorable to them. That could include the names of police with credibility problems who are going to testify against them.

The current law is the result of a compromise between the attorney general and ACLU-NH and five newspapers that sued in a public records lawsuit to have all the names on the list made public.

It is important for criminal defendants to know if an officer with credibility issues testified against them. If such information wasn’t disclosed before trial, the defendant could seek a new trial.