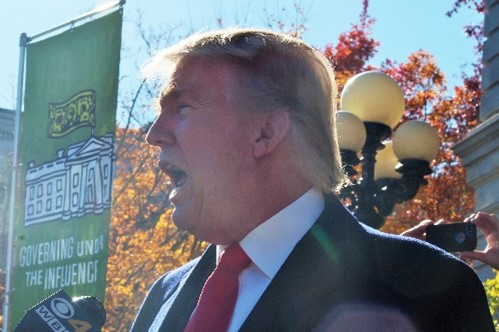 President Donald Trump is pictured the day he filed his candidacy at the State House in Concord.

There is nothing quite like the stirring sight of a mature Bald Eagle flying directly overhead to focus the mind. That is just what Kodi and I saw on our walk along the Connecticut River recently. We watched, enraptured, as the eagle soared almost endlessly without ever needing to flap it’s wings. It simply rode the air currents.

Historically it seems, it was almost harder for Congress to agree on the American Bald Eagle as our national symbol than it was to later adopt the Bill of Rights and the Constitution. That may be because Congress was not in charge of adopting the Constitution or the Bill of Rights. They did, however, have a veto on the official seal of the United States. Thus giving new meaning to the oft-repeated quip that “congress is the opposite of progress.”

Over the course of a few years, they rejected three different versions of the seal, beginning with an effort by Franklin, Jefferson, and Adams who took the first shot, followed by two other committees. The Bald Eagle was a bit of an afterthought, not appearing until the third committee’s submission at the suggestion of Pennsylvania lawyer William Barton.

By the way, Ben Franklin did NOT suggest the turkey as America’s national symbol. Apparently, over the years that has become a commonly cited bit of “fake news.” He did however consider the turkey to be a bird of higher moral character than the Bald Eagle, according to a letter written to his daughter, Sarah, mostly because the Bald Eagle was often a thief of fish caught by other birds of higher standing in Franklin’s eyes.

It’s hard to argue that the beautiful sight of a Bald Eagle soaring overhead is a less stirring sight than a group of turkeys taking flight long enough to go from the ground to a nearby tree limb while gobbling excitedly. But it’s not hard to argue that Congress, both parties, are more akin to the gobbling turkeys than eagles.

These thoughts jarred me back to more current events in our country.

Thinking back over the last few years since the 2016 elections brought Donald Trump into the White House, feels like a constant exercise in drinking from a firehose of cruelty, with a growing totalitarian shadow falling over the American idea.

“For most Americans, watching the President, and the government that he has crafted, is like watching a car crash in slow motion. We know that it’s coming. We just don’t know when the point of impact will be. More important, we don’t know whether it will be a fiery pileup or one car plowing into the Tree of Liberty and decency; a tree that has been painfully and lovingly nurtured; nourished with the blood, sweat and tears of patriots, as it grew and expanded for more than 200 years.”

Now we know. . . Donald Trump with the active and passive collusion and collaboration of the majority of elected Republican officials has turned what might have been a single car crash into a fiery national pileup.

I believe that I am correct when I say that the vast majority of Americans would agree with me that putting a former President on trial – irrespective of the outcome – is a terrible idea. Until recently I would have probably argued against such an idea, figuring that once defeated in an election we would be able to move beyond the tragedy of the last few years, but no more.

It’s not simply the crimes of which our former president has been recently accused. It is the authoritarian storm troops who have lined up behind him, virtually assuring that this madness will continue unless we draw a line in the sand.

It’s not just shocking that the Governors of Texas and Florida would effectively kidnap refugees who have walked thousands of miles to legally apply for sanctuary in our country. Neither is it simply puzzling that Ted Cruz and Marco Rubio, self-styled Constitutional conservatives, would sanction such behavior. It is not just weird to have this top tier list of Republican Presidential hopefuls referring to the theft of hundreds of classified documents as a “storage question.” It is downright authoritarian and, dare I say it – Un-American.

Un-american . . . under any other circumstances, I would be horrified to speak that word. As a First Amendment purist, I recognize that democracy is a messy and noisy business. The more we can remain open to one another’s ideas, the better and stronger our democracy will be. However, when others reject the guideposts that define the very meaning of democracy, we are at a crisis point.  60% of Americans live in a state where at least one “election denier” is on the ballot. This is the ultimate rejection of those guideposts.

We can muddle along for another two decades or more and hope that our Republic survives the trauma of the Trump presidency and its consequences, or we can rip off the bandage and let the fresh air at the national wound and hope that the line of acolytes behind Donald Trump will be dissuaded.  As difficult as it will be to prosecute Donald Trump, whether or not he is convicted, he, and his minions must be made an example for generations to come that the rule of law means something here in America.