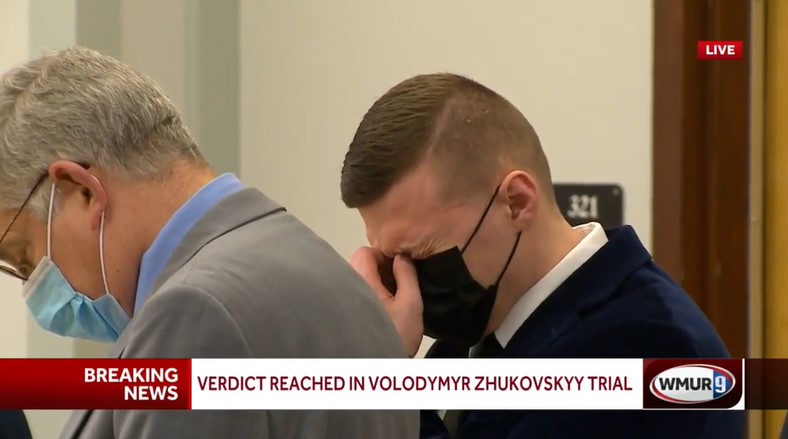 Volodomyr Zhukovskyy is pictured in Coos County Superior Court in Lancaster as all of the not guilty verdicts were read Tuesday in this WMUR screenshot.

The NH Association of Criminal Defense Lawyers issued a statement criticizing remarks by Sununu and Formella.

The jury of eight women and four men in Coos County Superior Court took less than three hours to acquit Zhukovskyy, 26, of Springfield, Mass., of the remaining 15 charges against him for the deaths of seven members of the Jarheads Motorcycle Club in Randolph.

Judge Peter Bornstein had already dismissed eight other charges after the state finished putting on its case.

“Our hearts go out to the victims and their families. Our trial team did an excellent job and we firmly believe that the State proved its case beyond a reasonable doubt,” said Formella. “Mr. Zhukovskyy should have been found guilty of the charges in this case and held responsible for causing seven deaths and numerous injuries. We thank the Court and the jurors for their service, and while we are extremely disappointed, we respect the verdict and our system of justice,” Formella said.

Sununu issued the following statement after Zhukovskyy was found not guilty of all charges in the Randolph crash that killed seven riders on June 21, 2019.

“The Fallen Seven did not receive justice today, and that is an absolute tragedy,” said Sununu. “I share in the shock, outrage, and anger that so many have expressed in the three years since the seven members of the Jarheads Motorcycle Club were taken from us. My heart goes out to their families, friends, and loved ones on this especially dark day.”

During closing arguments Tuesday, Assistant Attorney General Scott Chase blamed truck driver Zhukovskyy for the crash. Throughout the trial, prosecutors pointed to the drugs including heroin, cocaine and fentanyl Zhukovskyy took before going to work that morning, but were unable to prove the effects of the drugs caused the crash.

Defense Attorney Jay Duguay said: “(Jarhead) Al Mazza caused this accident. Volodymyr Zhukovskyy is not guilty.” The evidence in the state’s case does not add up to the charges against Zhukovskyy, Duguay said.

According to Duguay, the state’s witnesses never gave a consistent version of the story, members of the motorcycle club lied about how much they and Mazza, who died in the crash, had been drinking on the day of the crash, and the state’s own crash experts found Zhukovskyy did not cross the centerline just before the crash.

Duguay said the state was aware of many of these inconsistencies but pushed forward because it has no other evidence.

“The fact is this accident happened so fast no one had an opportunity to understand what happened,” Duguay said.

Zhukovskyy wasn’t immediately released after being held without bail for three years. Originally from the Ukraine, Zhukovskyy was being held on an immigration detainer. It was unclear Tuesday night what the next step will be for him.