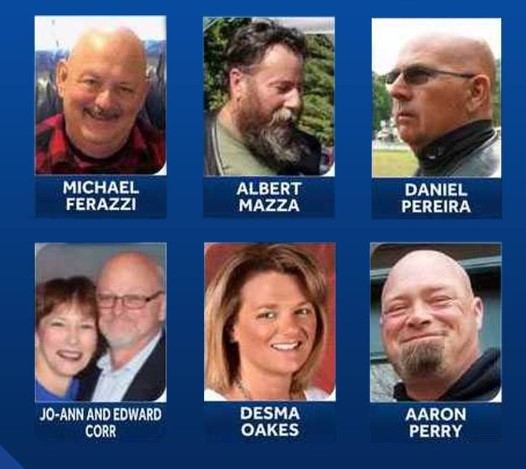 Screenshot from the Marine Corps Times of the seven people who died in the Randolph crash three years ago.

LANCASTER – Jurors in the Coos County Superior Court found truck driver Volodymyr Zhukovskyy not guilty Tuesday after 11 days of testimony of all 15 charges in the fatal crash that killed seven members of the Jarhead Motorcycle Club three years ago.

Wearing a black Covid-19 face mask, Zhukovskyy, 26, of Springfield, Mass., briefly took his glasses off a couple of times appearing to wipe away tears while the verdicts were announced. The jury of eight women and four men deliberated for about three hours before delivering their unanimous verdicts.

The evidence in the state’s case does not add up to the charges against Zhukovskyy, Duguay said.

According to Duguay, the state’s witnesses never gave a consistent version of the story, members of the motorcycle club lied about how much they and Mazza had been drinking on the day of the crash, and the state’s own crash experts found Zhukovskyy did not cross the centerline just before the crash.

Duguay said the state was aware of many of these inconsistencies but pushed forward because it has no other evidence.

“The fact is this accident happened so fast no one had an opportunity to understand what happened,” Duguay said.

Duguay said Al Mazza drove drunk and led his club of military veterans into one of New Hampshire’s most deadly crashes June 21, 2019 in Randolph. One witness testified Mazza looked backward just before the crash, Duguay said.

Chase dismissed much of the defense case as fantasy. He said Zhukovskyy was seen swerving in the road, took his eyes off the road to grab a drink, and plowed into the motorcycle riders.

According to Duguay, members of the Jarhead Motorcycle club take an oath to never disparage another member. That is the reason they lied about and tried to minimize Mazza’s driving. For example, member Josh Morin testified he had one drink the day of the crash, Duguay said, and that he did not think Mazza was intoxicated.

Duguay said medical records show Mazza had a .135 blood alcohol content percentage, and Morin had .022 bac. The legal limit is .08.

Member Michael McEachern testified that he had one beer during the get together before the fatal ride, and that he did not know who brought the keg of Coors Light, known at the club as Woody Water. Prosecutors contradicted McEachern on the stand, saying he had one or two beers. McEachern also returned Mazza’s keg to the store.

“Being a veteran entitles you to certain things,” Duguay said. “But it does not entitle you to deceive a jury.”

“The state didn’t call them because … the state doesn’t want you to hear what they have to say,” Duguay said.

Chase dismissed the fact prosecutors did not call the troopers or the third-party investigator, The Crash Lab to the stand, saying they knew the defense would bring in that evidence.

“Hiring The Crash Lab made it harder for the state, not easier. What are we hiding here? That’s not a conspiracy,” Chase said.

Along with Mazza, the crash killed Michael Ferazzi, 62, of Contoocook, Desma Oakes, 42, of Concord, Aaron Perry, 45, of Farmington, Daniel Pereira, 58, of Riverside, Rhode Island, Jo-Ann and Edward Corr, both 58, of Lakeville, Mass.

According to the testimony, Zhukovskyy got up the morning of the crash, used heroin, fentanyl and cocaine before starting work at 8 a.m., driving to Albany, New York, to pick up a car for the Massachusetts transportation company that employed him.

Zhukovskyy got the car in New York around 10:30 that morning and headed for the Berlin City Auto dealership in Gorham. After delivering the car around 5:30 p.m. Zhukovskyy started driving his truck and trailer on Route 2. He told police that he looked away for a moment when he reached for a drink bottle, taking his eyes off the road just before the crash.

Zhukovskyy has a history of drug use and a dangerous driving record. Weeks before the accident, Zhukovskyy overdosed on heroin while fishing with his nephews, and had to be revived with NARCAN.