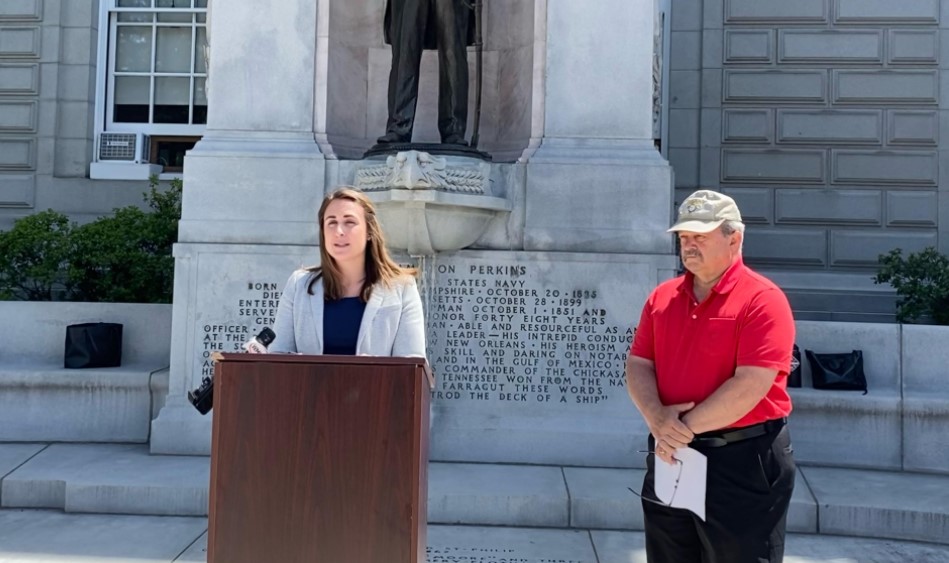 Molly Lunn Owen, executive director of 603 Forward and Ed Friedrich, a Marine Corps veteran, and grandfather of an active duty member of the U.S. Navy spoke at a news conference May 23, 2022 opposed to "provisional ballot bill."

Within hours of Gov. Chris Sununu signing the controversial Republican-backed affidavit ballot bill into law Friday, opponents filed a lawsuit calling it unconstitutional, demanding it not be enforced.

Critics say SB 418 is intended to suppress voting and will especially make voting difficult for people in the military. Proponents insist it is important for New Hampshire’s election verification.

The lawsuit claims SB 418 violates the New Hampshire Constitution by making it impossible for city and town clerks to convey election results to the Secretary of State’s office “within five days following the election” and delaying certification of the final vote until at least seven days after an election.

After signing SB 418 Friday after previously expressing reservations about it, Sununu issued this statement:

“The New Hampshire Secretary of State (David Scanlan) is the foremost authority on our state’s elections, and he has given me his full assurances that this bill does not affect the state’s ability to get military ballots out on time, and that our processes will work without delay or impediments with its passage.

“New Hampshire’s elections have been, and will continue to be safe, reliable, and accurate – and this bill won’t change these facts,” Sununu said.

On Saturday, Anna Fay, spokesman for the Secretary of State, responded to InDepthNH.org with a quote from Scanlan.

“The Secretary of State believes this bill can be successfully implemented without impacting the rights of New Hampshire voters, and especially our veterans and active military personnel,” Scanlan said.

The lawsuit quoted Scanlan saying, “After the General Court passed the bill, Secretary Scanlan explained he had ‘simply raised, you know, that there may be a constitutional issue with [SB 418], and I’ve done that. But if the bill becomes law, then we’re going to administer it and leave it up to someone else.’”

Under SB 418, a first-time voter registering to vote on election day who does not have a valid photo identification must vote an affidavit ballot.

The vote is “serialized, segregated, and subject to removal from official vote counts if the voter does not provide documentation of their identity within seven days of the election,” according to the lawsuit.

Voters who are unable to comply with the process necessary to have an affidavit ballot counted will be referred to the Attorney General for investigation and possible criminal penalties.

“SB 418 continues to allow anyone who comes to the polling location on election day to cast a ballot. This bill does not address citizenship, it addresses positive identification, a requirement in voting which has been upheld as legal across the country. This is a meaningful verification of that identification within seven days of the election.

“The Secretary of State’s office has indicated this bill contains adequate time to deal with the issuance of military and overseas ballots and that this bill would have no effect on getting those to voters in time,” Griffin said.

“The governor never should have signed this bill without first seeking a Supreme Court opinion on its constitutionality as the Secretary of State (Scanlan) proposed,” Cote said.

“Our military leaders and local election officials repeatedly explained how SB 418 would complicate elections and jeopardize the rights of overseas voters, particularly those serving in our armed forces. The GOP’s obsession with finding new ways to suppress voters has real, harmful effects on our democracy, and House Democrats will be working to modify this law before it takes effect.”

Rep. Ross Berry, R-Manchester, said “The problem with our elections is that New Hampshire voters are rapidly losing confidence in them. Here in the state of New Hampshire, there is absolutely nothing required of you to vote. This bill addresses those people who are showing up to the polling location on election day who are not registered to vote and who are registering to vote with nothing.”

Olivia Zink, executive director of Open Democracy, said: “New Hampshire already has an incredibly secure voter registration and election process. SB 418 is a solution in search of a problem, and will infringe on the ability of students, those moving to New Hampshire, and our overseas military to cast their votes.”

The lawsuit, led by the Elias Law Group in Washington, D.C., was submitted by Steven J. Dutton and Amanda Quinlan of the Manchester firm McLane Middleton and Chichester Attorney Paul Twomey.

The current law that is in effect until SB 418 becomes effective Jan. 1, 2023, to register to vote in New Hampshire, including on election day, requires being a U.S. citizen 18 years or older and domiciled in the town or ward where they want to vote, which can be proven by signing a Qualified Voter Affidavit, under oath, in front of an election official if they do not have documents. They must also prove they are domiciled where they intend to vote, which can also be satisfied by signing a Domicile Affidavit.

The lawsuit alleges: “The impacts of SB 418 are significant and will have broad, negative impacts on the voting rights of entirely lawful, eligible New Hampshire voters.

“Many new registrants will be forced to cast an affidavit ballot and may have their affidavit ballot nullified by the Secretary of State and even become the subject of a criminal investigation, all for the ‘crime’ of not having or presenting a specific form of identification,” according to the lawsuit.

Many other voters will also be affected by SB 418 by longer lines at the polls due to the confusion about how to vote.

“Rather than contend with longer lines and confusing forms, many voters will simply choose not to vote at all,” the lawsuit states. It may also determine the outcome in some races.

“Without any supporting evidence, then-President Trump falsely claimed that his 2020 defeat in New Hampshire—by a margin of over seven percentage points—was attributable to fraud.”

It went on to say Sununu and other New Hampshire leaders dismissed claims of fraud in the election.

The lawsuit continued: “Then-President-elect Trump made similarly false claims about New Hampshire elections after the 2016 presidential election. He alleged that ‘serious voter fraud’ in New Hampshire was to blame for both his loss to Hillary Clinton, as well as then-Senator Kelly Ayotte’s loss to Maggie Hassan—a race that was decided by 0.14 percentage points, a margin of barely over 1,000 votes. Trump claimed that ‘thousands’ of voters were bussed in from Massachusetts to steal the election from him and Ayotte. Not only did Trump have no evidence to support those claims, but since then those claims have been repeatedly and thoroughly debunked, including by the Attorney General’s office.”

According to the Brennan Center for Justice, states over the last 20 years have been placing “barriers in front of the ballot box.”

These include “impos­ing strict voter ID laws, cutting voting times, restrict­ing regis­tra­tion, and purging voter rolls. These efforts, which received a boost when the Supreme Court weakened the Voting Rights Act in 2013, have kept signi­fic­ant numbers of eligible voters from the polls, hitting all Amer­ic­ans, but placing special burdens on racial minor­it­ies, poor people, and young and old voters,” according to the Brennan Center.

Some of InDepthNH.org‘s previous reporting on SB 418

Skewing the Political Process To Tip the Scales in N.H.

About our reporter: Nancy West founded the nonprofit InDepthNH.org seven years ago after reporting for the NH Union Leader for 28 years. She is a past winner of the New Hampshire Press Association’s Lifetime Achievement Award and this year’s First Amendment Award. She can be reached at nancywestnews@gmail.com.