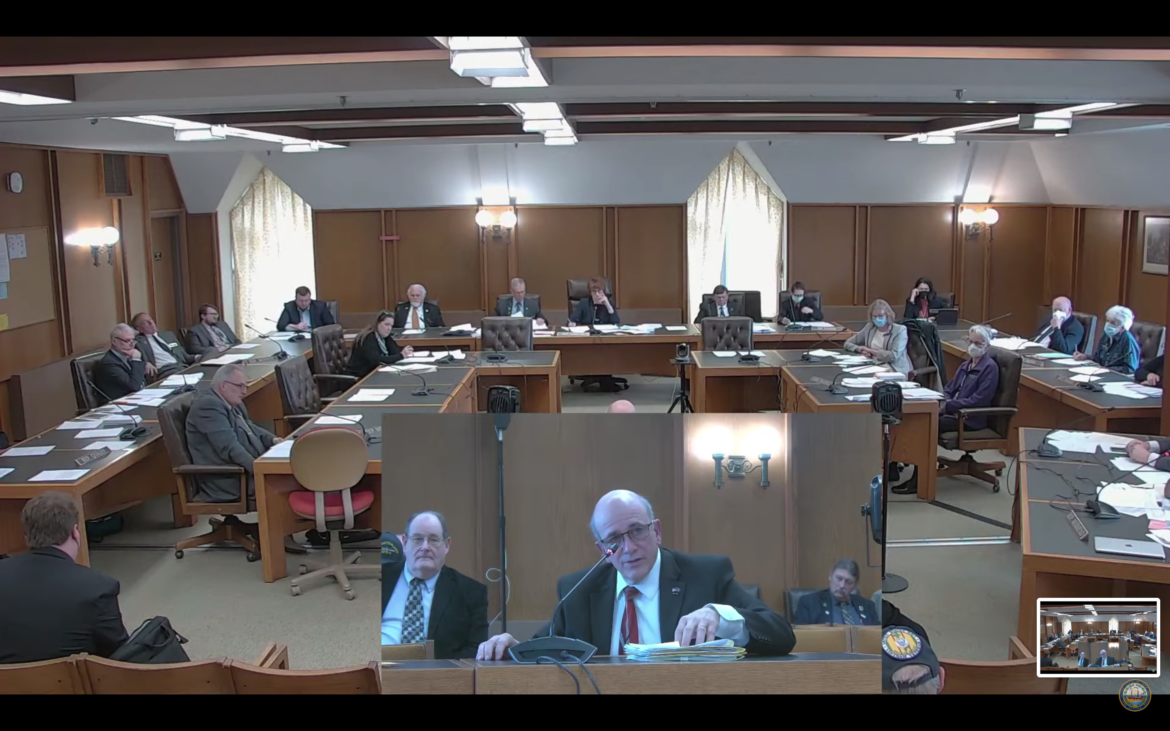 At a more than two-hour public hearing on Senate Bill 418, a number of veterans, current military and their representatives turned out in force to oppose the bill saying it will be nearly impossible for the state to meet the 45-day deadline to mail absentee ballots to overseas military personnel or citizens under the provision of the bill.

They said the bill could make it impossible for the very people who are protecting the country to vote.

The sponsor and several other supporters denied that is the intent, but instead said it attempts to improve the sanctity of elections and to improve confidence in fair and accurate results.

“The quality of our elections and the process is not the question, they are excellent,” said the prime sponsor Sen. Bob Giuda, R-Wentworth. “The gatekeeping is what is lacking. The entry is what breeds vulnerability.”
He said his bill closes that loophole.

Under the bill, a person who registers to vote on election day without a photo identification, would receive what the bill calls an affidavit ballot — much like a provisional ballot in other states — and will be given an overnight mailer to send to the Secretary of State’s Office with the required documentation to prove the person’s identity within 10 days.

If the information is not received within the timeframe, the vote is deducted from the total announced election night.

The affidavit ballot would be placed in a container on the side of the voting machine and would be counted separately. When the moderator announces the vote total at the end of tabulation, he or she would also announce the number of affidavit ballots cast.

The issue of vote totals and if they can be changed after they are officially announced at the end of the tabulation as required by the constitution, would be one issue Secretary of State David Scanlan suggested lawmakers could send to the Supreme Court for an opinion.

Scanlan told the committee he generally supports the bill, but suggests they put the bill on the table and then ask the state Supreme Court for an opinion of its constitutionality.

He made the same suggestion to the Senate before it approved the bill on a 13-11 vote.

Giuda said he refused to do that because he does not believe lawmakers should be subordinate to the courts.

“We don’t subordinate our actions or our opinions to the courts,” he said. “The issue is the sanctity of the vote.

“We are not going to ask the courts ‘mother may I?’ I will not do that.”

A number of people testifying against the bill, who far out-numbered those in support, raised the issue that the bill would be unconstitutional in light of the court’s ruling on Senate Bill 3, which contained similar provisions and a U.S. Supreme Court decision to let the lower court ruling stand in a Kansas case saying requiring documentation in order prove identity to vote is unconstitutional.

Henry Klementowicz, senior staff attorney for the American Civil Liberties Union NH, said acquiring a Passport or birth certificate could take longer to obtain than the 10-day window in the bill to produce the documentation.

And he said the bill would violate the most recent addition to the state constitution protecting a person’s private information, like who he or she voted for, from government entities.

Klementowicz also gave the committee a letter from the Attorney General’s Office saying there are currently no criminal or civil proceedings concerning voter fraud.

The letter said the office instituted 23 investigations, with 18 resolved and five at issue but there are no cases of wrongdoing.

Election officials from across the state said the bill would create a two-class system that would not apply to anyone registering to vote with their town or city clerk, but would when you register on election day.

“This is a solution to a problem that does not really exist,” said Derry town clerk Daniel Healey, speaking for the town clerk’s association, “and ends up creating additional issues.”

Election officials also said the election process is growing more and more complicated because of new laws and this bill would make it even more complicated and confusing which will mean legitimate voters will not vote.

All the law changes are an attempt “to chase away that phantom white van from Massachusetts that shows up on voting day,” said the president of the League of Women Voters NH, Liz Tentarelli of Newbury. “This is the kind of confusion we need to avoid to restore the public’s faith in elections.”

Others noted the premise of the bill is based on a conspiracy theory of rampant vote fraud, which has never been the case in New Hampshire.

And the bill would require additional staff to process the documentation within the time frame others said, costing additional money. several noted.

“This is unnecessary and tries to solve a problem that does not exist,” said Linda Bundy of Antrim. “This will suppress the vote when our elections are secure, accurate and reliable.”

Lisa Danetz of the Brennan Center for Justice said the bill would put the state in danger of losing its longstanding exemption from the motor voter bill.

To avoid meeting the requirements of the motor voter bill passed after the 2000 election, the state agreed to establish an election-day registration system which has been in place since that time.

Losing the NVRA exemption would require New Hampshire to overhaul its laws, policies, and procedures related to elections and voter registration, as well as impose new requirements on various state agencies such as the Department of Motor Vehicles and public assistance agencies according to Danetz.

Gov. Chris Sununu also noted the possible loss of the exemption when he raised concerns about the bill earlier this week.

But Scanlan said he believes the bill will help restore faith in the state’s election system with polls showing residents losing confidence in the process due to a number of reasons, many national and through social media.

“The trick is how to put the brakes on that,” Scanlan said. “Nothing has changed. Elections are as sound today as they were 20 years ago.”

Giuda said he is not targeting students or immigrants, but he is targeting unqualified voters.

“2.5 million have come across the southern boarder of the US,” Giuda noted. “How do we know they are not here voting? We don’t.”

According to the House on-line testimony portal, 854 people opposed the bill and 24 supported it.