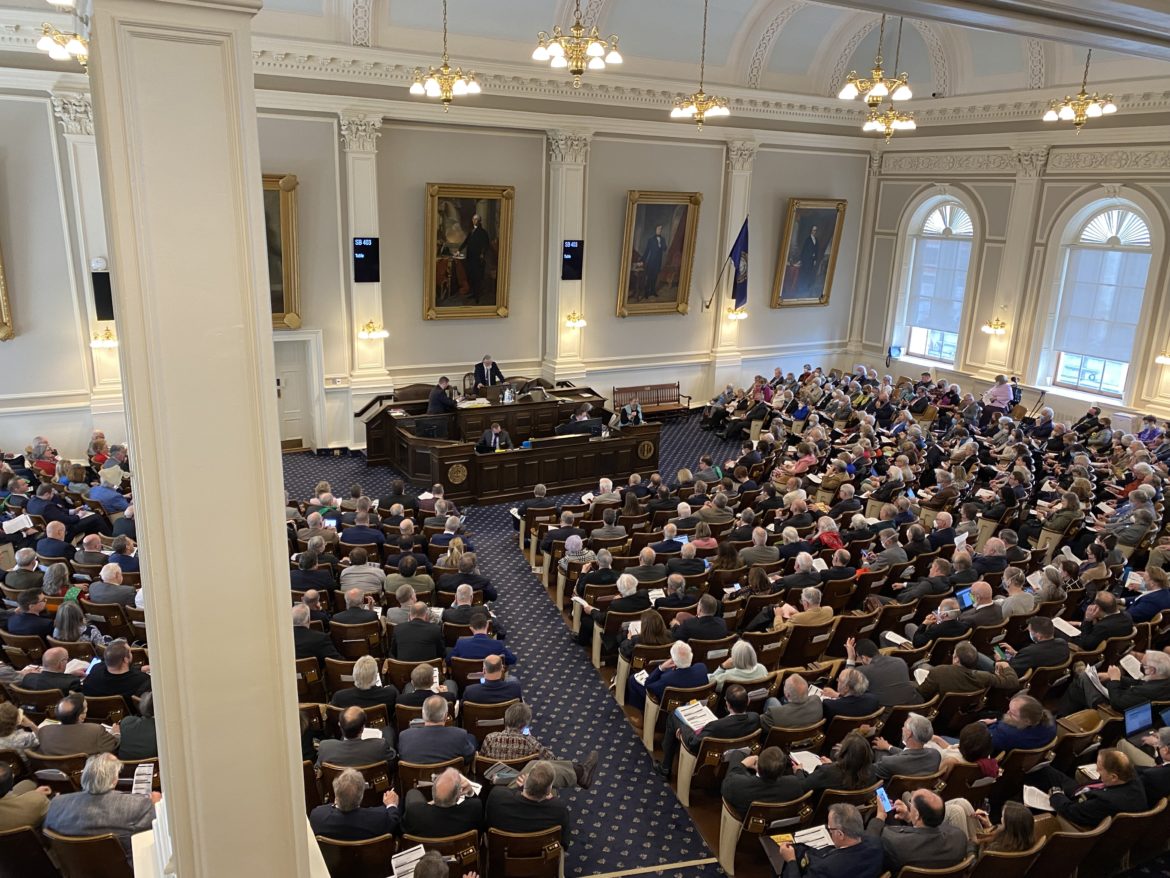 The House met in Representatives Hall on Thursday, April 21, 2022.

CONCORD – The House has voted with the Senate to support an election law change related to identification for same-day voters, but it may face an uncertain future with Gov. Chris Sununu.

Senate Bill 418 was passed 180-154. It is the provisional ballot or “affidavit ballot” bill. Under the bill, a person who registers to vote on election day without photo identification would receive what the bill calls an affidavit ballot — much like a provisional ballot in other states — and will be given an overnight mailer to send to the Secretary of State’s Office with the required documentation to prove the person’s identity within 10 days.

If the information is not received within the timeframe, the vote is deducted from the total announced on election night.

The affidavit ballot would be placed in a container on the side of the voting machine and would be counted separately. When the moderator announces the vote total at the end of tabulation, he or she would also announce the number of affidavit ballots cast.

Supporters call it important to election verification and opponents said it is unnecessary and could disenfranchise voters.

Secretary of State David Scanlan told the Election Law Committee he generally supports the bill but suggests they put the bill on the table and then ask the state Supreme Court for an opinion of its constitutionality.

Many turned out for the hearing in opposition, claiming it could disenfranchise the overseas military and create an unconstitutional two-class system for voters.

The sponsor and several other supporters denied that is the intent, but instead said it attempts to improve the sanctity of elections and to improve confidence in fair and accurate results.

Sununu also noted the possible loss of the exemption when he raised concerns about the bill earlier.

It is now referred to the House Finance Committee.

Rep. Russell Muirhead, D-Hanover, said the bill is an expensive and complicated solution to a problem that does not exist and he noted that the governor has said that the elections are secure, accurate, and reliable here and there is no question about it.

He said the bill would make two classes of voters and ultimately be found unconstitutional.

Rep. Ross Berry, R-Manchester, said to vote in New Hampshire, you need to present nothing.

He said he never claimed there is massive voter fraud here, but said he believes the state has a problem with vote integrity.

He said this bill is a compromise. Turnout is low, he said, because of a lack of faith in elections.

House Democratic Leader Rep. David E. Cote, D-Nashua released the following statement after the vote:
“SB 418 is about one thing and one thing alone – chipping away at the voting rights of Granite Staters who Republicans do not want to participate.”

Cote said the GOP has been working to systematically weaken Granite Staters’ voting rights for years.

“It is obvious that no matter what they say, Republicans do not believe they can win with ideas, so they try to limit who can participate. This bill is wrong for New Hampshire and ought to be vetoed by Governor Sununu if it makes it to his desk,” Cote stated.

SICKNESS AS REASON FOR ABSENTEE BALLOT

The House killed SB 427 on a 183-151 vote which would allow for sickness as a reason to get an absentee ballot to vote.

In the 2020 election, during the pandemic, the law was temporarily expanded and this bill would allow more people to vote in the future, advocates said.

Members of the majority of the committee, however, said  “sickness” was too vague and it would lead to inaccurate vote counts and the existing law is adequate. The House went with the committee’s majority recommendation.

JUVENILE LAW
A bill designed to keep kids out of incarceration if they have not committed a violent crime was passed 244-88, related to the intended closure of the Sununu Youth Services Center in Manchester and reducing the number of incarcerated youths.

The Senate voted to support the committee report on Senate Bill 458-FN; it too was referred to Finance.

Rep. Robert Lynn, R-Windham, former chief justice of the state Supreme Court, rose in opposition to the amendment which passed but said he supported the underlying bill.

He said the amendment would eliminate the three-strike exception and states a minor can never be committed for any non-violent crime no matter how serious.

He said the amendment sends a message that in New Hampshire, property rights don’t mean much.

“How does that make sense with the smash and grabs going on around the country,” Lynn asked.

Yes, it would reduce the population at the Sununu Center, built for 141 and currently incarcerating 15.

Rep. Cody Belanger, R-Epping, said he did not realize we were encouraging juveniles to go to prison.

“This bill is about building a new facility. The amendment intends to reduce the population. We are spending $12 million a year,” Belanger said.

He countered previous statements and said there was never a previous vote on this amendment defeated this past winter and that the notion that no adult was ever sentenced to incarceration on a property offense was false.

“I sentenced a lot of people,” he said calling it “a fantasy.”

DOMESTIC PARTNERSHIP
Senate Bill 291 to establish a committee to study domestic partnerships and property rights when a couple splits up was killed 179-143.

Supporters of the committee report recommending the bill be killed said this is already a settled area of law and does not need to be studied. It would lead to litigation, clogging up the courts.

ENHANCED PENALTIES FOR MOTOR VEHICLE VIOLATIONS PASSED
Senate Bill 306-FN passed 201-132. It would allow enhanced penalties for prosecutors to use in various motor vehicle violations if someone is found to be impaired and distracted by a mobile electronic device like a cell phone.

Rep. John Burt, R-Goffstown, opposed the majority recommendation of ought to pass and noted it was also opposed by the Liberty Alliance.

“Why just cell phones?” he asked noting he sees people putting on make-up and reading the newspaper as they drive and even police using their cell phones as they drive. “Who is going to enforce it?”

He said it violates article 18 in the NH Constitution. But the majority approved the committee’s recommendation.

DASH CAMERAS IN DEPARTMENT OF TRANSPORTATION VEHICLES
SB 401-FN would allow DOT dash cameras and increase funds to allow more dash cameras for local departments. It was voted ought to pass adopted 241-93 and referred to Finance.

Burt said he did not like the idea of the bill on privacy grounds calling it a “spy without a warrant” noting that another state agency could come in and use that tape which was against, again, the Constitution related to privacy.

He said the overwhelming majority of the state “do not want government surveilling us.”

The DOT wants videos of accidents involving their drivers and vehicles when doing their job.

The committee majority expressed support for the right of privacy when it is an expectation with the DOT vehicles, they are vehicles driving on the highway, a public way, really open to the public.

It would establish a revolving clean energy accelerator fund in the Department of Energy.

MEMORIALS, TARTAN DAY, AND FORMAL SUPPORT FOR MAINTAINING THE FIRST-IN-THE-NATION PRIMARY
The late Rep. Katherine Rogers of Concord was eulogized by fellow members of the House of Representatives and commended for her life’s work on behalf of her beloved city, advocating for the poor, marginalized, and “all creatures great and small” through her many years at the opening of the House session, Thursday. The Democrat recently died of cancer and up to the end fought for what she believed, fellow members said.

The recognition was followed by a resolution affirming the House’s support to maintain the state’s first in the nation primary, now more than 100 years old, and a proclamation was read from the governor, naming April 6 as New Hampshire Tartan Day, with music from bagpipers and a Scottish blessing.