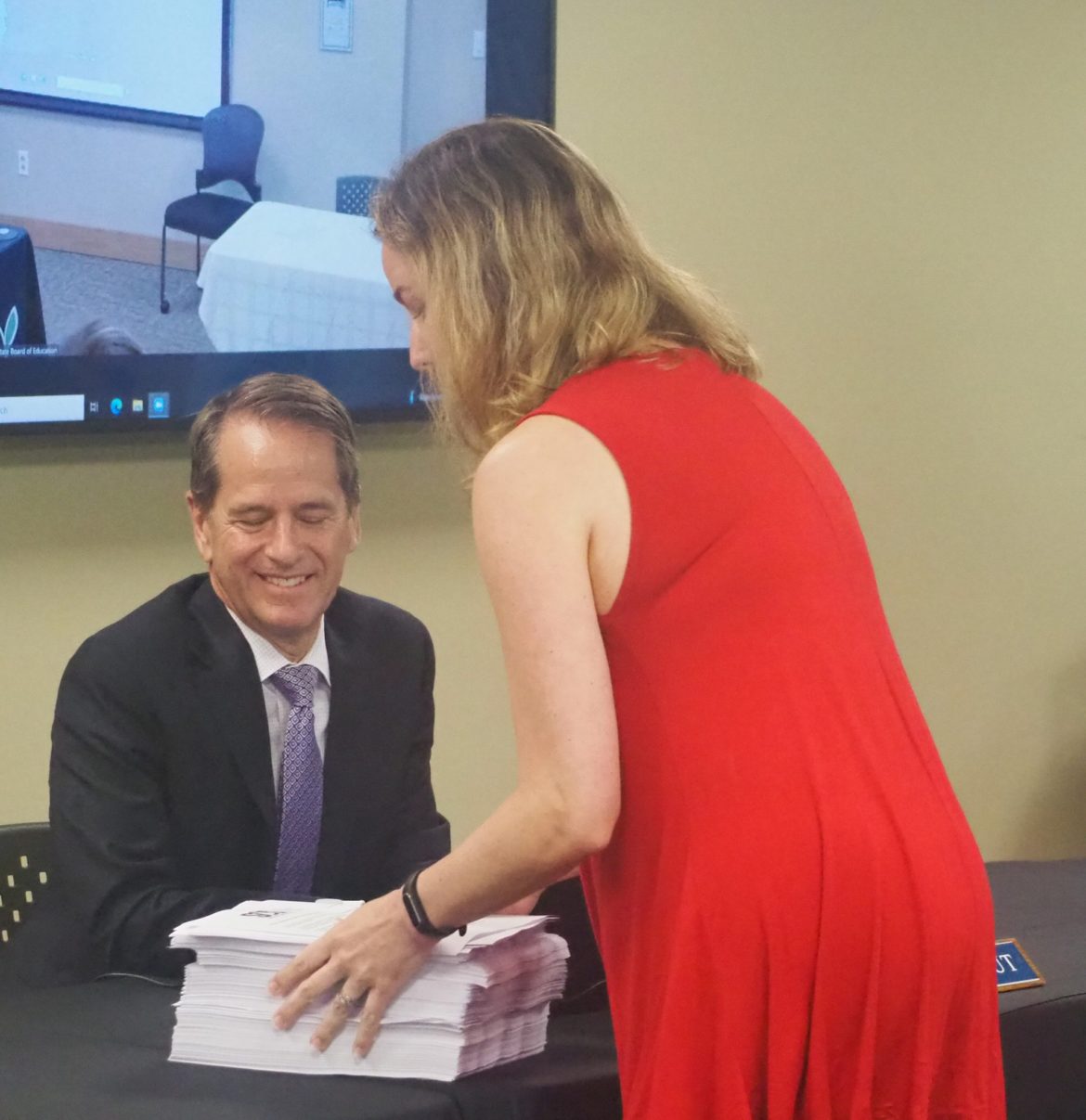 Jen Bisson, a Sandown mother who founded the public education advocacy group Support Our Schools NH, handed Education Commissioner Frank Edelblut a stack of letters calling for his resignation during the public comment period at Thursday’s monthly meeting of the NH Board of Education.

CONCORD—Jen Bisson, a Sandown mother who founded the public education advocacy group Support Our Schools NH, handed Education Commissioner Frank Edelblut a stack of letters calling for his resignation during the public comment period at Thursday’s monthly meeting of the NH Board of Education.

“I’m sorry Commissioner Edelblut, but you are not the person to lead the Department of Education,” Bisson said before putting a pile of more than a thousand letters on the table where he was sitting.  “We cannot have a commissioner of education that seeks to dismantle public education from the inside out.”

In an email sent by an aide, Edelblut responded, “Our work at the New Hampshire Department of Education is ongoing and expansive, as we strive daily to support students, families, and educators with a wide range of needs. My goal remains the same, and I believe and hope that many individuals share in this priority – to craft bright futures for our next generation of Granite Staters.”

Support Our Schools NH has been collecting letters calling for Edelblut to step down since March 3.

“I never thought in a million years that I would attend a public meeting to demand a public employee’s resignation, but here I am,” said Bisson, who described herself as “a busy working mom with young children.”

Bisson also charged Edelblut with links to Jody and Ian Underwood, members of the Free State Movement who led efforts to slash school funding in Croydon.

Support Our Schools began soliciting calls for Edelblut’s resignation in March when the commissioner endorsed HB 1671, a bill which would have eliminated art, health, world languages, physical education, engineering, computer science, and digital literacy from the list of core subjects needed for an “adequate education” in the state’s public schools.  “HB 1671 was literally written by Edelblut’s Department of Education,” the group said.

The version of HB 1671 ultimately approved by the House and Senate restored most of those subjects to core requirements and added financial literacy to the list.  The bill, which is awaiting action from Governor Sununu, also added Holocaust and genocide education to social studies requirements.

Lidia Yen, who came to New Hampshire as a refugee when she was 7 years old, told the board she benefited from financial literacy classes and was relieved when they were added to the core curriculum requirements.  “Commissioner Edelblut has shown everyone that he does not support public education through his support of this bill as well as other attempts to change public education or privatize it,” Yen testified.

When she heard about HB 1671, “I actually cried,” the Pembroke resident said. “The Commissioner is supposed to represent the public interest, but that’s not what I’ve seen from the past couple years.”

Four other Edelblut critics also spoke during the comment period.

“You’re welcome to have your say,” board chairman Drew Cline said after the comment period, “but the commissioner does not answer to the board. We’re not his boss. We have no say whatsoever over the commissioner. And that’s just a fact. That’s the law.”

Richard Sala, who served as attorney for the Department of Education before being appointed to the board, defended the commissioner in a brief comment at the meeting’s close.  Sala said Edelblut works hard, has lots of energy, and has lots of ideas on improving education.  When they worked together, Sala said, “never once did we ever sit in a dark room and think about how to destroy public education, how to destroy democracy.”