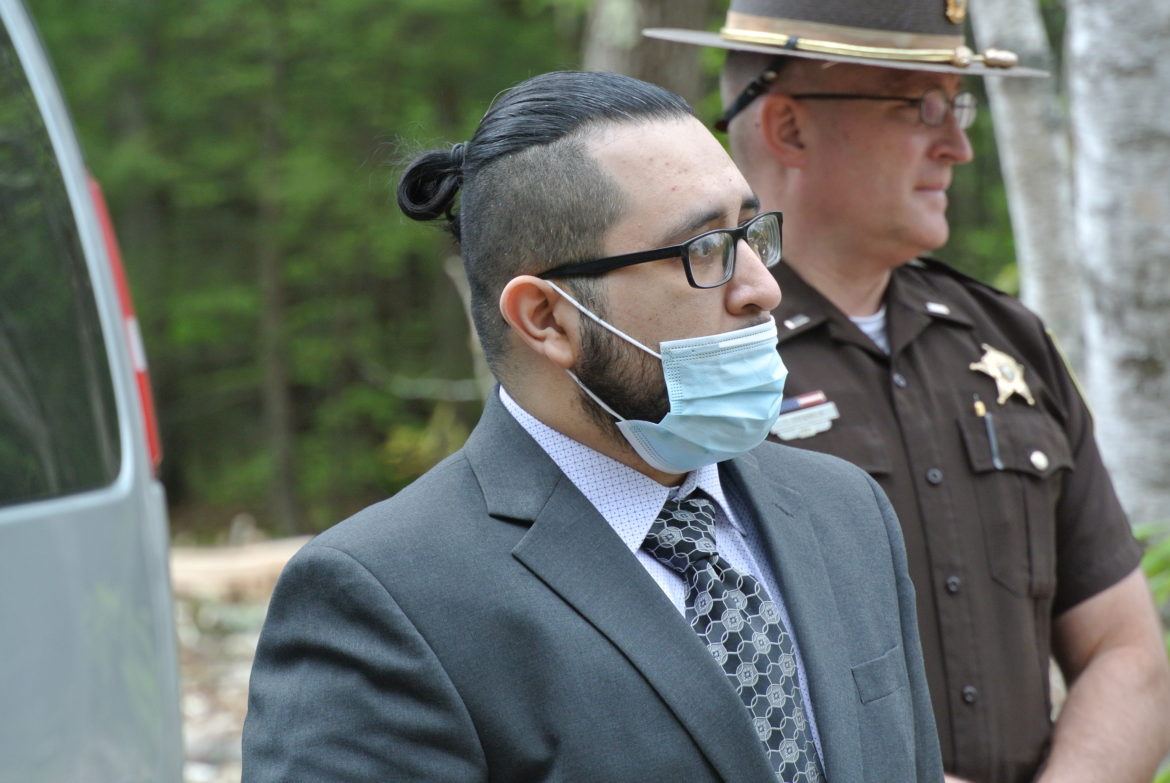 Armando Barron is pictured under guard May 17 during the view in his first-degree murder trial.

Life in Prison for Armando Barron

KEENE — Armando Barron is going to prison for the rest of his life for murdering Keene’s Jonathan Amerault, and then forcing his wife, Britany Barron to cut the head off Amerault’s corpse.

“(You’re) a creature not even worthy of a glance from me,” Justine Amerault, the victim’s mother, said during the sentencing hearing held in the Cheshire Superior Court on Friday. “The last hours of Jonathan’s beautiful life were in the company of this ugly, hideous, demented creature.”

Barron was found guilty by a jury on Thursday on all 13 charges against him connected to the 2020 murder. The charge of first-degree murder carried a life sentence without the possibility of parole.

“You mentioned to Jon you have a revolver called ‘the judge.’ Now we have another judge here today who will decide your miserable future,” Kenny Amerault said.

Along with the murder charge, Armando Barron was found guilty on a dozen charges including second degree assault, domestic violence assaults, and kidnapping Jonathan Amerault for luring him to Annett Wayside Park in Rindge. On top of his life sentence, Armando Barron will serve an additional 45-135 years, consecutively, on all the other charges.

A week before the murder, Britany Barron told her husband she wanted a divorce. He responded by choking her unconscious in their Jaffrey home and slapping her. Over the following week, Britany Barron began a friendship with the lonely Jonathan Amerault, a coworker at Teleflex in Jaffrey.

On the night of Sept. 19, 2020, Armando Barron found romantic text messages between his wife and Amerault and he flew into a murderous rage.

“You know you’re going to die tonight, right” he told his wife while savagely beating her, and repeatedly shoving the loaded .45 caliber Judge revolver in her mouth, according to testimony.

According to the testimony and evidence, Armando Barron then hatched a scheme to torture and kill Amerault. He used his wife’s cell phone to send a text luring Amerault to the Ringe park, and then proceeded to beat and stomp on Amerault after ambushing him with the gun.

During this violent attack, Armando Barron tried to force his wife to kill Amerault. He put the gun in her hand and put his hand over hers, but she refused to pull the trigger. He forced her to step on Amerault’s neck to strangle him. But she stepped off when Amerault’s body jerked. He then forced his wife to cut Amerault’s wrists, according to testimony.

Finally, Armando Barron put Amerault in the back seat of Amerault’s Subaru, and he taunted the man he was about to murder.

“You know, I’m going to let you live,” Armando Barron said, according to Britany Barron’s testimony.

“Wait, I thought you were going to let me live,” Amerault said.

“I guess that makes both of us liars,” Armando Barron said before shooting him three times, she testified.

Armando Barron then had his wife drive Amerault’s car back to their house. They packed both the Subaru and the family Jeep with camping gear and dove hours north to Atkinson Gilmanton Academy Grant in Coos County, all the while Armando Barron had his wife talk to him over their cell phones.

At the remote camping site Armando Barron drove the Subaru into the woods, disabling the vehicle. He and his wife then destroyed evidence, like the contents of Amerault’s wallet. Armando Barron then forced his wife to cut the head off Amerault’s body while he watched, according to testimony.

Armando Barron left the next day and told his wife to have the body buried by Friday when he would bring their three daughters to say goodbye to her for the last time.

By Tuesday, a group of bear hunters who were annoyed that Britany Barron was camping near their bear baiting site, called New Hampshire Fish and Game. The conservation officer met with Britany, who had just put Amerault’s body into a nearby creek, and who initially lied about what she was doing there.

It wasn’t until hours later, at the Berlin Police Department, that she told police what had happened.

Police in Jaffrey had been in contact with Armando Barron after Justine Amerault reported her son missing. Even though Armando Barron agreed to meet with police, he loaded up a pickup truck with concrete and bags of soil, got his oldest daughter, and fled north, prosecutors say. He was arrested near Errol and taken into custody.