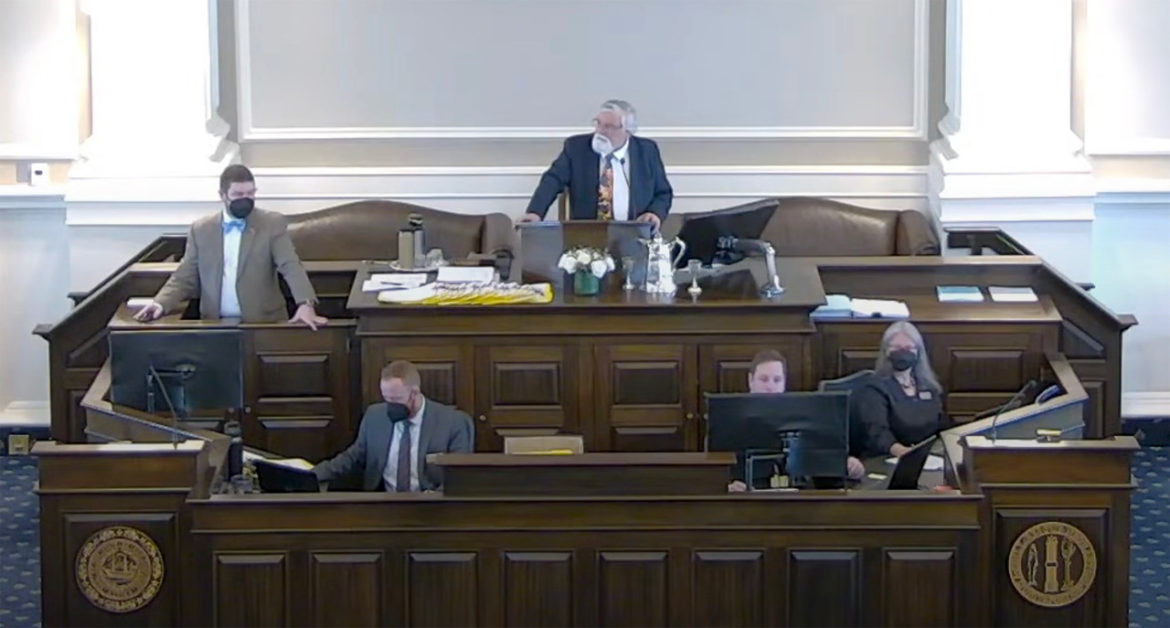 House Speaker Sherman Packard is pictured at the podium Thursday.

By Thomas P. Caldwell, InDepthNH.org
CONCORD — A map designating congressional districts for New Hampshire passed the House on May 5, leading to fresh charges of gerrymandering.

The creator of the map, Rep. Ross Berry, R-Manchester, said his latest version addresses the complaints he had heard in testimony on the previous version.

There were complaints that it split “communities of interest” so the new map keeps them intact. The current map splits five of the state’s 10 counties; his keeps all but two together.

“This map has the lowest deviation of any map publicly presented,” Berry said. “There’s 1.37 million people that live in this state, and this map has a difference of nine, without dividing a single town or city.”

Rep. Max Abramson, R-Seabrook, referred to the salamander-shaped district in Massachusetts that led to the term “gerrymander” and said it “is literally in my backyard in Seabrook.”

“This amendment kills retail politics in New Hampshire by creating two long-boundary districts where candidates must spend money in five different television markets, forcing our congressional delegation to raise tens of millions of dollars from out-of-state special-interest groups,” he said. “Why make congressional district races more expensive, putting our congressional delegation in the back pockets of out-of-state and foreign moneyed interests, that all four men on Mount Rushmore warned us against?”

Following the 179-159 vote to pass the amended SB 200, Rep. David E. Cote, D-Nashua, the House Democratic leader, said, “The people of New Hampshire, including the governor, have made clear that radical changes to our congressional districts are not desired or necessary. As Democrats have repeatedly proposed, the population of our districts can be equalized by moving just one town from CD 1 to CD 2.”

After arguing against moving SB 399 forward on the agenda to hear it on Wednesday, Rep. Jason Osborne, R-Auburn, on Thursday moved to table the bill concerning fetal protection before there was any discussion. His motion to table passed, 177-156.

Other bills taken up on Thursday included SB 345, reducing the age that youths can work from 15 to 14 and increasing the hours that 16- and 17-year-olds can work from 30 to 35 hours a week. Rep. William Infantine, R-Manchester, said the current law is confusing to both parents and employers, and that the change strikes a balance to allow younger employees to work for financial reasons or for extra money.

The House killed SB 246, that would have set requirements for developers of qualified private communities to meet, including putting funds in escrow to cover half of the costs of the community’s road repair expenses.

SB 400, which would allow financial incentives for affordable housing, was tabled.