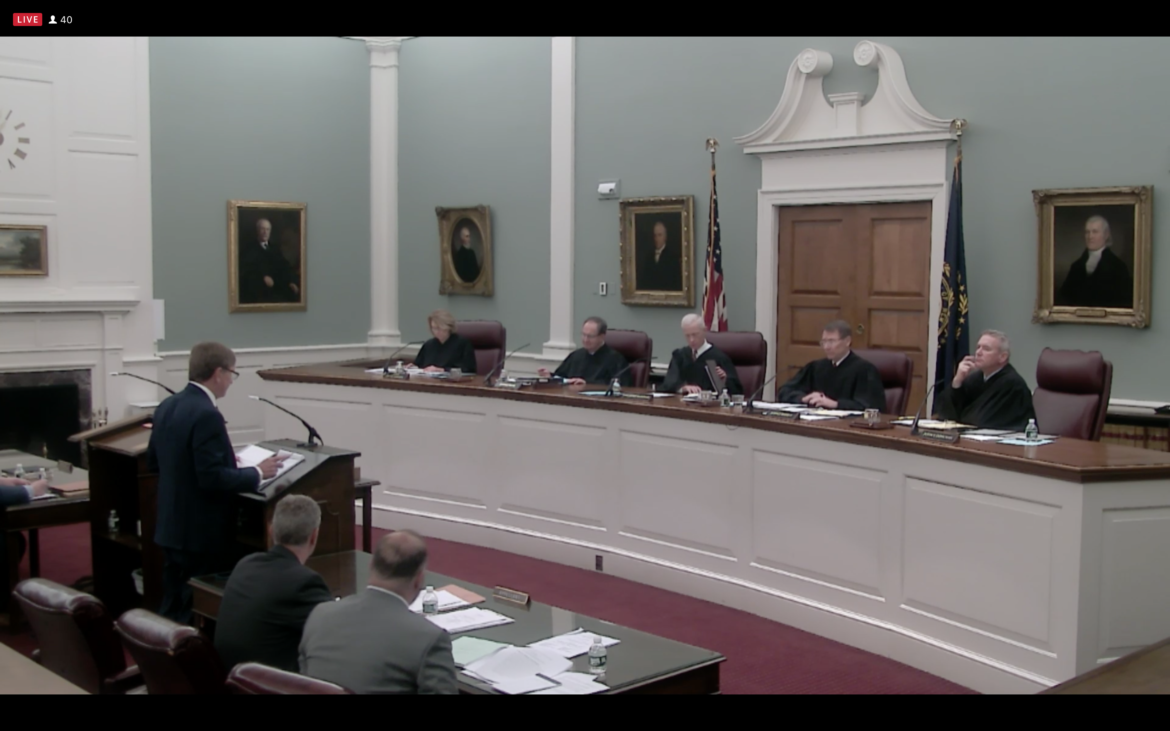 CONCORD — With a candidate filing deadline approaching, attorneys for the state, House Speaker, and Senate President argued the New Hampshire Supreme Court should leave the current maps in place for the 2022 election.

The Speaker and Senate President suggested the state court may not have the authority to decide a solution, and it may better be addressed in federal courts.

But the plaintiffs’ attorney argued the state court certainly has the authority to intervene and called it extraordinary the state leaders would believe the votes of slightly more than half the state’s voters should be diluted because one district is larger than the other by 2.6 percent.

He noted their suggestion goes against the one man, one vote principle in the United States and New Hampshire Constitutions, the federal and state supreme court decisions, which all say that should not happen.

All sides agreed the court should take a “least change” approach if the Legislature and Gov. Chris Sununu fail to reach agreement on new maps for the state’s two Congressional districts, currently held by Democrats.

But attorneys for the state, and legislative leaders, suggested the least change could be leaving the current districts in place for the upcoming election.

But that process had not been smooth sailing; Devaney characterized it as sailing on choppy seas.

Sununu said he would veto the plan developed by the Republican majority on the House Special Redistricting Committee that significantly changed the existing districts, but was approved by the House and Senate.

Sununu proposed a plan that was based on the current districts, but the House Republicans on the committee rejected his proposal and developed a third plan pitting the two incumbent Democrats against each other while creating a likely Republican district and a Democratic district.

Sununu has said he does not believe the latest proposal, which will be voted by the House this week, would produce two competitive districts and instead favors one party or the other.

Attorney Sean List, representing House Speaker Sherman Packard, noted the House is in session today and tomorrow and one of the bills to be decided contains the latest proposed maps for the Congressional districts.

He was asked how long the court should wait to declare an impasse, and if May 27 was the last day the Legislature is scheduled to meet.

List said there could be an extension of the session, but did say it would take a supermajority to do that.

Attorney Richard Lehmann, representing the Senate President Chuck Morse, warned the court that if it took over redrawing the congressional maps it would be wading into partisan politics.

“I am not accusing or suggesting the court make a partisan decision,” he said,” but any action you take will have partisan consequences.”

He suggested the best solution would be to leave the maps as they are, noting there is no vacuum for the court to fill. It is not necessarily the court’s job to fix the problem, he said.

“There are other things going on here other than resolving redistricting,” Lehmann said. “The ACLU brief appears to be teeing up a gerrymandering claim down the road.”

Associate Justice James Bassett questioned Devaney on what would be an acceptable deviation under the state constitution noting the federal standard has been .7 percent.

Devaney said as with the Pennsylvania case which was just argued, you could make the case that the New Hampshire constitution requires an even stricter standard than the federal because of its equal protection clause.

And he noted the state’s free and fair election law also imposes a stricter standard than the federal provision.

He argued the court should have a special master begin work on a possible map to be ready if the legislature adjourns at the end of the month with an impasse, which appears likely.

The Secretary of State’s attorney Myles Matteson said the filing period could be extended in order to have a constitutional map.

The Secretary of State wants the least amount of disruptions to the election process, Matteson said.

Although the state primary will not be held until September, absentee ballots have to be mailed to overseas military families and others out of the country by July 30.

Having a split ballot with only the congressional races on one would be confusing for voters and election officials as well as more costly and complicated, Matteson said.

The court asked the litigants to address three key issues: whether the current districts are constitutional under the one man, one vote, principle; whether the court should adopt the “least change” approach from other court redistricting cases; and if least change is not the best approach, what would be.

The court appointed Professor Nathaniel Persily, of Stanford Law School, to serve as special master in this case.

The suit was originally filed in Hillsborough County Superior Court South and claimed the legislature is at an impasse with the governor threatening to veto the plan approved by the House and Senate that made major changes in the two districts. Under the plan, 35 percent of voters moved from one district to the other.

The five voters filing the suit, including former House Speaker Terie Norelli, argue the districts will not be finalized when candidate filing period with the Secretary of State’s Office opens in June.

Secretary of State David Scanlan is the defendant in the suit.

The Supreme Court took supervisory jurisdiction over the case from the Superior Court saying the issue needs to be resolved quickly so the dates of the filing period do not have to be changed. The filing period for candidates runs from June 1 to June 10.

They said in their order that their action does not preclude legislators and Sununu from reaching agreement on a plan that would make their involvement moot.