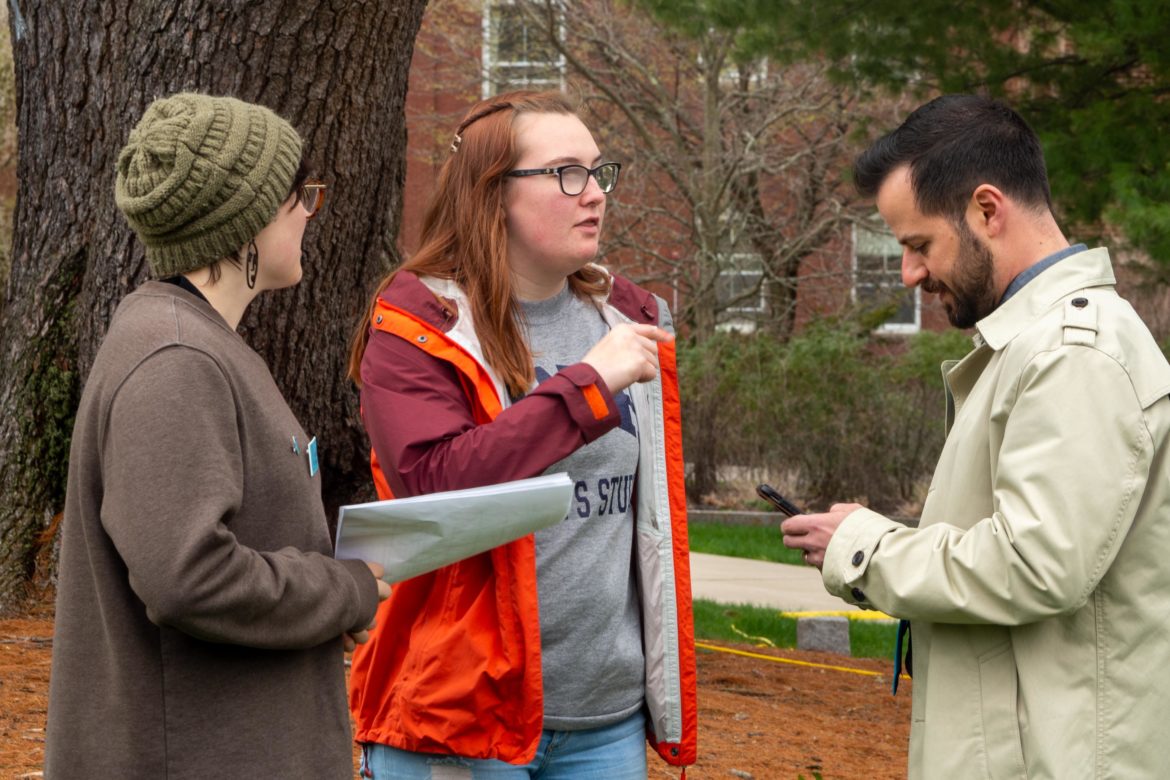 DURHAM—Speaking to several dozen students clustered on the Great Lawn at UNH in Durham, Kai Parlett asked her audience to consider New Hampshire kids dreaming about going to college to get an education and make friends.

“Imagine if college was about learning nuanced math, or how to write, or some crazy awesome science,” Parlett suggested.

Instead, students at campuses like UNH have to learn “which path is best lit at night, which frat houses you shouldn’t go to and what faculty members are safe people and who’s going to tell you it’s your fault.”

For Parlett, the lesson came fast.  Two weeks into her first year at UNH, she was drugged and raped at a campus party, and that wasn’t even the worst of her experience, she said.  “Instead of supporting me,” the Women’s and Gender Studies major explained, “this university made me feel like I was the one who was at fault.”

After protests last fall charging the UNH administration with doing too little to establish a climate of safety on campus, Parlett joined with other students to form the Sexual Violence Action Committee (SVAC), which hosted the UNH rally on Wednesday.

“I do not feel safe here, and I do not feel supported here,” Parlett stated, adding, “I’m not sure the administration sees that as a problem.”

The problem of sexual violence on campus is not insignificant.  According to a report prepared for the university by the Sexual Harassment and Rape Prevention Program (SHARPP), “In a single year at the University of New Hampshire, 17% of the student body (approximately 2,500 students) experiences at least one incident of interpersonal violence (IPV), ranging from sexual assault and harassment to stalking and relationship abuse.”

SHARPP’s report, a draft sexual violence “prevention plan” released last November, says the UNH experience is consistent with what is reported around the country, which “sheds light on why researchers and practitioners in higher education refer to sexual violence on campus as an ‘epidemic.’”

Neither is the problem new; SHARPP itself grew out of grassroots student activism in the late 1970s.  The agency now provides education, training, and support for the campus community.  But the problem hasn’t gone away.

Another speaker who volunteers with both SVAC and SHARPP described herself as “a human whose autonomy and choice was taken away not one night but again and again through months of dealing with the Title IX [a nondiscrimination law which applies to most institutions of higher learning] and legal processes just to be told that the case could not be charged due to insufficient evidence, even though I had written proof from my attacker of his actions.”

Changing the system was the objective of the UNH rally, which was initiated by SVAC and co-sponsored by nine other organizations, including SHARPP.  It was held on “Denim Day,” an internationally observed event which marks an incident 30 years ago when an Italian judge threw out charges against a rapist on the grounds that his victim was wearing tight jeans.  Many of the rally attenders wore denim, which Brecken Harrigan of SVAC said, signifies “that we will not tolerate victim blaming or sexual violence and to show our support for survivors.”

If there was one consistent message from all the speakers, it was “Get involved.”   To that end, co-sponsoring groups set up tables on the lawn where volunteers were available to talk about their group’s particular role.  UNH Wildcats in Action is a relatively new advocacy group calling for mandatory classes dealing with sexual violence prevention and related topics.  The UNH branch of the NH Youth Movement supports activism at the State House, including on topics such as reproductive choice.  The Reproductive Freedom Fund had a table, as did the Women and Gender Studies Program and campus agencies which provide counseling services.

Within the amalgam of different groups and voices, the Sexual Violence Action Committee sees its role as stirring things up.  Unlike the programs that are inside the system, SVAC exists to put pressure on the system to change.  “We’re here, we’re loud, we’re paying to be here,” Parlett told me.  SVAC’s message to the university is, “We’re going to keep standing up until you stop ignoring us.  We’re hoping to keep standing up until you stop saying this is okay because it’s not, we know it’s not.”

For Hailey Kaliscik, who was staffing the SVAC table, the aim of the group is to be proactive, to “notice what is going on campus and be willing to speak up.”

“We can cause a little bit of good chaos,” Parlett said with a smile.  “I think that’s needed.”

It may be working.  Among the speakers at a rally billed as a “walkout of classes” was Mike Blackman, the Dean of Students, who looked thoroughly comfortable taking the mic at a protest rally.  Expressing his gratitude to the student activists who have pushed the administration to act more forcefully, Blackman said he’s found it “amazing that we could come together as a community and really advocate for change together.”

The university has a plan, released last December, with 22 “concrete commitments” grouped into the categories of prevention, reporting, training, and specific student safety concerns.   For Blackman, who has been Dean of Students for only about a year, the plan marks a beginning. “I don’t think any of us can sit back and say the work is now done,” he said.

When I asked the dean whether the sexual violence problem has gotten worse, he said UNH is “no different” from other campuses.  “I wouldn’t say for sure if the situation is getting better or worse, but I think we are seeing cultural change and more attention.”

Kai Parlett says SVAC is thinking of making Denim Day an annual event on the UNH campus.  Next April 27, it will be interesting to look back and see whether renewed activism and institutional focus has made a difference.