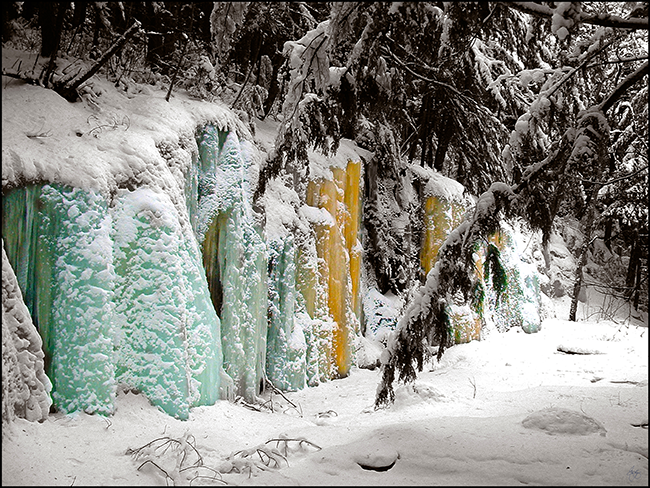 The dramatic changing weather here in the valley between Rattlesnake Ridge and the Waterville Range has produced days and nights well below zero interspersed with a few calm and pleasant ones. One warmer night seemed to summon forth the Barred Owls with their enchanting calls whoooo, who cooks for youuuu. It was on that night that I donned the headlamp and set off with my new companion Kodi – a white shepherd recently adopted.

Unlike my late friend Boof, the Siberian Husky, who could not be trusted to stay close because the wolf in him summoned him constantly toward adventure and the wild, Kodi is velcro dog. He only requires a leash for show alone, because he wants to be friends with every human and dog he encounters along the way. Fortunately, hiking at night doesn’t require even that constraint. I have rarely bumped into a nighttime adventurer on my evening forays, with the exception of the four legs whose territory I am encroaching on in the dark hours. Kodi stays with me, cheerfully laps at the snow, and stops only occasionally to listen for the Barred Owls.

On this night we had a very specific mission in addition to enjoying the Barred owl symphony we were destined for the icefalls of Smart’s Brook.

If you have ever driven Route 49 toward Waterville Valley in the winter you may have noticed the parking area for the Smart’s Brook Trail chock full of vehicles in even the most challenging weather and even on the most unlikely days.

The most recent snowfall created a magical journey – despite the turmoil imposed upon us by the world. In the chill of our late night walk even these seemed to fade to grey momentarily.

The parking area was empty, reflective of the hour and we were soon padding up the trail.

Recalling the full parking area only a few hours earlier I wondered about all of the people – many joined by their own four-legged companions. A more astute observer of culture might have been capable of matching personalities and even ideologies with the cars and their assortment of bumper stickers, parking passes, and telltale clues to the leanings of the hikers but in the end, this was not important. They had all come for the gift of quiet and beauty in the midst of the cascading crises. . . some knowing what awaited them on the trail, others curious or teased along by the rumors they had heard of this magical spot.

Left at the parking lot was the firehose of tragedy, of crisis piled upon crisis: 50 years of growing income disparity, the climate crisis, the pandemic, racism, sexism, and now a war in Ukraine threatening to entangle the entire world.

Left behind, if only for a few moments: Trump and Putin – locked in their “Last Tango in Tyranny”; Josh Hawley, Mike Pompeo, Tucker Carlson, joining arms and dancing around them. The savage cruelty being inflicted on innocent children and men and women who want nothing more than the chance to live their lives with some sense of dignity, security, and freedom.

For a brief time each, in their own way, would escape the fears that they felt for the future – for their own personal challenges or for the world.

Irrespective of their ideologies, penchants or prejudices, they would leave behind the stories to which we have become prisoners.

Every one of us who walks along the brook until they come upon the gorge with mind-blowing colorful iceflows, is left breathless by the beauty of the moment.

Drawing their range of colors from the minerals in the ground, the ice flows in gold and blue and teal against rock outcroppings of red, black and brown, an amalgam of color worthy of a reflection of the tears of our world.

Could it be that if the stories we told ourselves about this world blended together with a beauty reflected in these outcroppings that we could recreate a world where the reds, blacks, yellows and whites formed a beautiful tapestry of life, drawing us together in the story instead of apart?

Tonight, as I look back upon that hike only a few nights ago, I pause and hear the unexpected sound of Canada Geese in flight overhead, piercing the night’s quiet. Evening chevaliers, unexpectedly forging their way north despite the hour and against the impending storm.  So too must we.