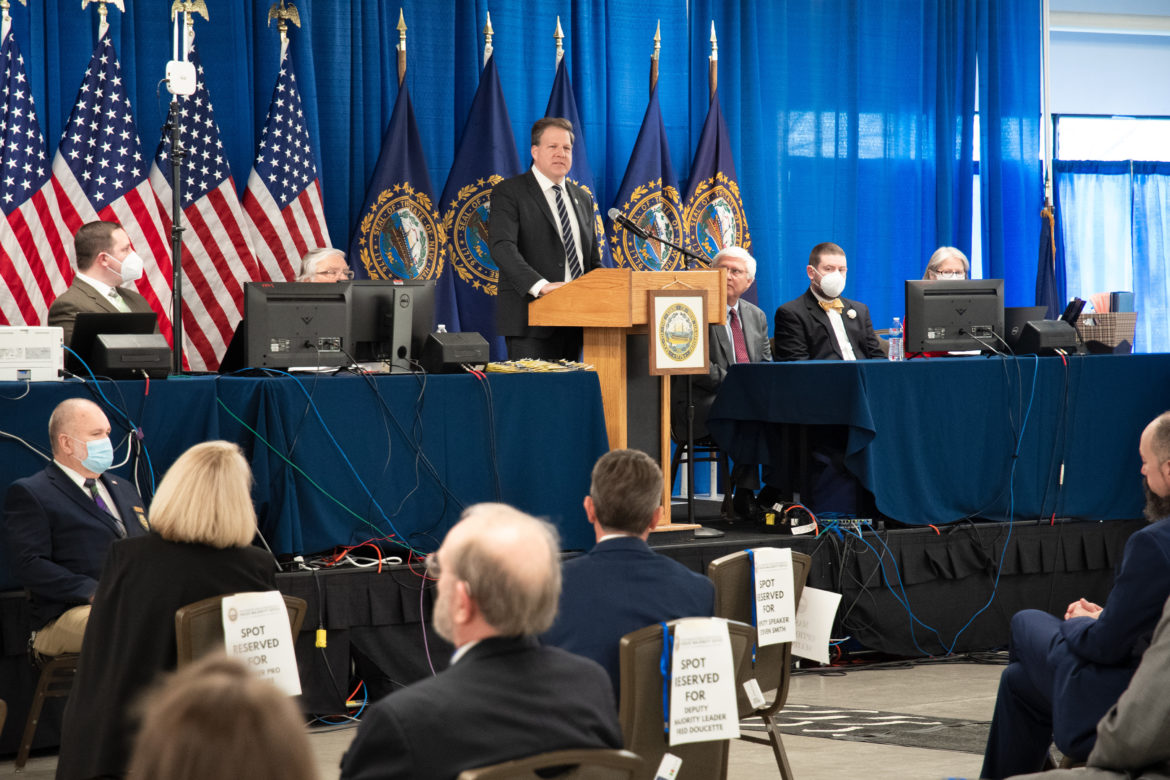 Gov. Chris Sununu is pictured giving his State of the State address Thursday at the DoubleTree Inn in Manchester.

MANCHESTER – A new campus in Franklin focused on the needs of the state’s veterans and a $100 million fund to incentivize local housing projects across the state were among new initiatives Gov. Chris Sununu outlined in his State of the State address Thursday.

Sununu also talked about initiatives in his administration to create two new mental health facilities and spent some time talking about how the state is doing as in its second year of the pandemic.

Sununu was about to conclude his remarks by urging legislators to reject the extremist views that have divided the state when there was a medical emergency in the room at the DoubleTree Inn in Manchester where the House and Senate met in Joint Convention to hear his speech.

Rep. Ralph Boehm, R-Litchfield, collapsed and was taken out in a stretcher appearing conscious and alert with the help of people around him and Manchester firefighters.

Senate Democratic Leader Donna Soucy, D-Manchester, issued a response to Sununu’s speech. It is posted in full at the end of this story.

Sununu also talked about initiatives he will continue to work on in the coming year, including mental health and behavioral care.

“We made progress on some of the most important issues facing our communities, including an area that I am incredibly passionate about mental health… When I came into office, the State had a mental health system that was fragmented and designed by and for bureaucrats, not for families and individuals…. and [we] have worked to dramatically transform the entire mental health system,” Sununu said.

Sununu said when he took the job he chose a nurse, Lori Shibinette, who worked with the long-term health care system to be his commissioner of Health and Human Services, and together with her team, the administration has worked to transform the mental health care system.

He noted the state recently signed a purchase and sales agreement for the 100-acre Hampstead Hospital to provide access to high-quality mental health care for children. Sununu said the state now also has a mobile crisis support and call center and in the next few weeks he will announce a public-private partnership to provide an adequate number of crisis beds for those who are most in need of mental health treatment.

Sununu said that “will have a profound effect,” and that he hopes to get everyone’s support.

The governor also talked about broadband investment and cleaning up PFAs from the environment.
He said the state used the federal CARES Act to deliver high-speed service to 4,500 families.

And he gave accolades to Senate President Chuck Morse, R-Salem, who has worked on PFAs contamination issues using federal and some local dollars. He said the state will be “taking that challenge head-on for the next 20 to 50 years, so thank you, Senator Morse.”

Many of Sununu’s remarks drew standing ovations from a mostly mask-less Republican majority, but one that had a bipartisan ovation was the creation of a New Hampshire Veterans Campus in Franklin.

Sununu will need the legislature to agree to partner with Easterseals to develop a state-of-the-art campus using about $21 million in federal American Rescue Plan Act funds.

The services will include behavioral health services for mental health and substance misuse for veterans, transportation services, home care services, and coordinated care on a 15-acre campus.

It will also provide permanent housing, respite/retreat beds for veterans, and wellness amenities.

Another major initiative in need of legislative support is Sununu’s effort to find more housing across the state.

He is also looking at $100 million in federal ARPA funds to provide incentives for communities and developers to create multifamily housing developments.

About a $60 million funding pool would be established to help provide gap funding for such projects to get going; about $30 million in another pool to establish per-unit “bonus” payments to municipalities that can get the projects up and out in six months from the application; $5 million to demolish old buildings; and $5 million in planning and zoning grants to allow municipalities to update regulations.

It would be called the InvestNH Housing Incentive Fund.

Sununu said the state is very attractive and growing faster than any other state in the region, but he noted that growth comes with some housing difficulties, and those need to be addressed to continue to be among the strongest states economically in New England.

He also looked back to 2021 and advances made to put the state on even more solid ground.

“In just the last year, we: Cut the statewide property tax by $100 million…Cut the rooms and meals tax — while still increasing revenue sharing with municipalities by 45 percent…Cut business taxes — again…Permanently began phasing out the Interest & Dividends tax for retirees…and those were tough decisions to make,” Sununu said.

He noted that the state also doubled the state’s rainy day fund to over $250 million to a standing ovation from Republicans.

Sununu is considered the fifth most popular governor in the nation with a 59 percent approval rating by Morning Consult, behind governors in Vermont and Maine.

But a UNH poll of over 800 residents released in December showed the governor’s approval rating declining from the past spring.

Sununu has said he will seek a fourth term as governor rather than run, as top national Republicans had urged, to run for the U.S. Senate against Democratic incumbent Maggie Hassan.

At town meetings next month, he said, people should fight for lower taxes.

“Today the Granite State is ranked as the Freest State in the Nation…We have the Strongest economy in the Northeast and the fastest population growth in New England….We are Number One in America for Public Safety…First in Economic Freedom… and we continue to have Lowest Poverty Rate in the country with some of the highest average wages for our citizens.

“We didn’t get here by accident — we did it through smart management, prioritizing individuals over government, citizens over systems, and delivering results with the immense responsibility of properly managing our tax dollars,” Sununu said.

“In listening to the Governor’s address one thing was made abundantly clear – none of the progress made in the past two years would have been possible without the hard work and dedication of our federal delegation.

“We are extremely grateful to Senator Shaheen, Senator Hassan, Congresswoman Kuster, and Congressman Pappas for fighting every day to ensure New Hampshire has the resources we need to improve the lives of all Granite Staters. What the Governor failed to mention in his platitudes about freedom is who exactly has been made more free under his Republican leadership.

“Women are decidedly less free, as they now face the first abortion ban in modern NH history, which includes no exceptions for rape, incest, or fatal fetal diagnoses. Certainly, our educators are not more free, as they are battling the impacts of the Republican gag rule banning conversations about sexism, racism, and implicit bias.

“This chilling legislation has already created confusion, halted classroom conversations, and has led to the vilification and actual bounty hunting of our hard-working educators. Low-income New Hampshire workers are not more free, as they continue to work for an unlivable minimum wage, which is among the lowest in the country.

“They’re also grappling with an affordable housing crisis and a lack of access to child care. Certainly, Granite State property taxpayers who are being forced to foot the bill for the most expansive school voucher program in the country are not more free. Today, the Governor painted a rosy picture of a job well done and took credit for the hard work of our federal delegation, while, in the same breath, criticizing them for not getting anything done.

“The truth is that if it weren’t for the efforts of our federal delegation, the years of work done by Senate Democrats to bolster our state’s mental health system, Senator David Watters’ tireless advocacy to expand offshore wind, and the individual efforts of small businesses who fought to keep their doors open despite a woeful lack of leadership during the COVID-19 pandemic, what do you have left? An ineffective administration that has prioritized the desires of the far right and the ultra-wealthy over the real needs of the majority,” Soucy said.